Rotating Pawn with Static Mesh has No Collision

Does the mesh in question Use CCD ? Or any collision box.

Look for CCD to be checked as moving rotating objects especially fast ones with only simple collision will sometimes not trigger a collision. Complex Collision Detection usually fixes it for Moving / Rotating objects.

I’m making a flying vehicle with the intention of it being able to move across a flat plane and rotate on the spot. Right now, movement is working as intended and the vehicle will bump into objects it flies into. Movement is done using the AddActorWorldOffset node with Sweep enabled and works well.

However, when the player flies close to an obstacle and rotates, there is nothing to stop the vehicle. It will rotate through the object and become unable to fly in any direction until it rotates free of the obstruction. Rotation is handled, as shown below, using the AddActorWorldRotation node, also with Sweep enabled. 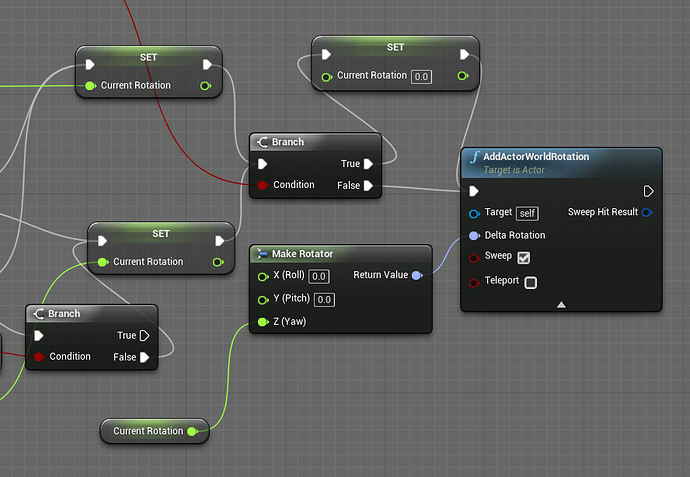 The fact that the AddActorWorldOffset node causes the actor to generate collisions would seem to suggest that this should work the same way, but alas it does not.

I would greatly appreciate any assistance in this as myself and my team are stumped.

Just tried it and that hasn’t changed anything. I think if that were the issue, collisions wouldn’t be detected for both movement and rotation, whereas here it’s only rotation causing issues. I should also mention that the vehicle’s rotation is quite slow, so rapid movements shouldn’t be a problem in this case.