at the moment I’m working on a little software that makes it easy to view assets.
The viewport area shouldn’t take up the whole screen, but only a certain part of it, so that the settings can be seen on the right and the timeline on the bottom.
But I can’t find a way to limit the size of the viewport so that the focus point is not in the middle of the screen but in the middle of the viewport.

Hopefully the image will make it a bit more understandable what I mean exactly. The red line represents the center of the viewport. 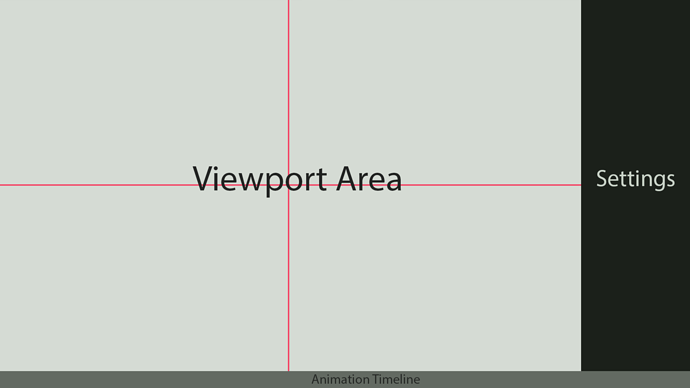 If you place settings in a widget it will be printed on the viewport anyway, no?
you need the viewport to be decentered? i am not sure but maybe is possible making your own class . dont know.

You can limit the size of the camera , selecting the camera in the actor and going in detail and Camera settings, you can find the Aspect ratio.
If you constrain and give her an aspect ratio of 1.7 you will get a Width of 1700 and an height of 1000.
Forcing the camera to lower aspect ratio like , 1, will result in a squared view, and 2 dark area will appear on the side of the view.
The view will be centered, i dont know if you can move it to the side.

Exactly, the viewport should be decentered. Just like it’s done in Maya, Substance Painter or in UE4 itself but it doesn’t have to be moveable.
Changing the aspect ratio has partly worked. Theoretically I would have enough space for the menu on the right, but on the left there is a black bar too and at the bottom there is no space for the animation timeline.

Well if you really want this kind of customization maybe you can use a 2d capture scene.
You need to create one of these 2d scene capture and a target render.
Than a material and feed the Target render into the material, Change the material domain from surface to userInterface.
Then make a widget , add an image and set the brush-image to the material you done.
This way you can set the Camera wherever you want in the widget space,
If you (like me) can see the target-render in the widget project but when you hit play it became white, play with the tint, i dont know why . 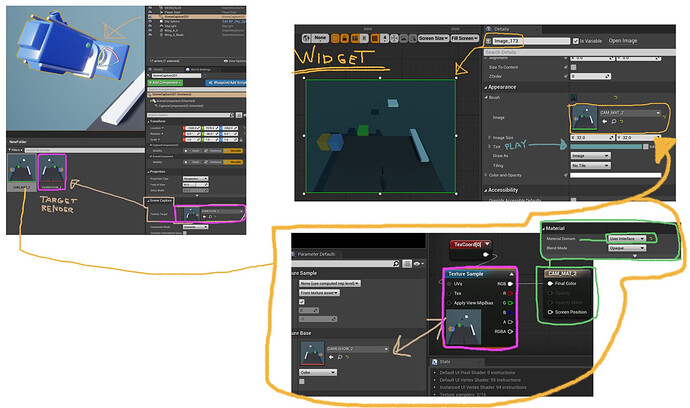 Is there any other way to achieve this other than with scene capture/render targets? Scene capture doesn’t capture lumen in UE5…

I’ve found a couple other threads asking about this same thing, but no good solutions…

Resurrecting this thread because I’m trying to achieve the same thing. @AquaRex did you have any luck? @Shadowriver, the problem with this approach is that it squishes the entire game view, so everything renders horizontally squished. Changing the camera’s aspect ratio doesn’t help, as it always adds black bars, and you can’t shift the view left or right, it stays centered with the black bars at equal sizes on the left/right or top/bottom. [UnrealEditor_YpvYSQpqmz]