( I seem To be making Prototype Left and right for some reason. Can’t seem to stick to one thing.)

Howdy. I was kinda inspired from some of the old Original Resident Evil Games that I’m made a Quick Prototype of it. What i’m planning to do for this one is to make a straight up clone of the RE Gameplay. I feel like old style have not been seen much in recent games and I wanted to make one.

Al I did was make a Basic Camera BP, a Door BP, And the Item Pickup BP for the game. I have not touch the Inventory system.

Great recreation of the Camera system from the original RE games. Are you looking to continue to work on the other features?

Great job so far on the cameras JvtheWanderer! Be sure to keep us updated as you progress along the development of your project. I loved the camera setup of the older Resident Evil games. Can’t wait to see more!

That is fantastic! I’ve been toying with doing something similar to the old Resident Evil game as some point. This makes me want to try it myself!

Great recreation of the Camera system from the original RE games. Are you looking to continue to work on the other features?

I am. I’m working on making a Inventory Menu and a inventory management Using the Experimental UMG for the game. Then I’m going to add some puzzle elements for the game.

I’ll Be Broadcasting on what i’m doing in the moment. So if you want to watch you can. http://www.twitch.tv/jvthewanderer

Sorry it Took long. I was taking care of other stuff.

Anyway I added a few stuff like a basic inventory system and a door that now requires a key to unlock a room. I’m using UMG to Make the UI. I’m planning to work more on the Inventory System a bit more. 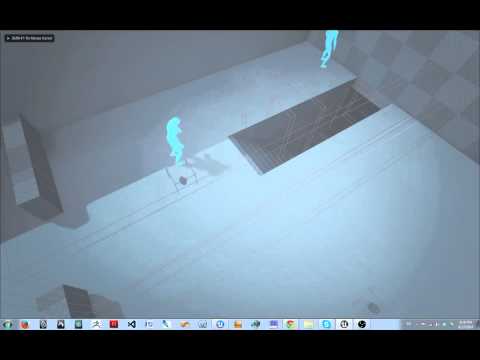 Just out of curiosity, are you planning on making a tutorial for the camera system? I’m very interested on how you have it set up. I’ve tried a few times and haven’t had much luck.

Oh yeeah this is awesome!

Good job on the cameras, I am a fan as well of the old RE, RE2 was my fav.

As DieByZero said it already, this totally reminds me of the first Resident Evils too. Haha, was a huge fan at that time… the new REs are okay…

This is so awesome, I would have a lot of fun working on something like that! If only there were more hours in the day…

Just out of curiosity, are you planning on making a tutorial for the camera system? I’m very interested on how you have it set up. I’ve tried a few times and haven’t had much luck.

Not yet. I’m planning to do More with the Camera System like trying to make the camera move while standing in a certain place.

I’m also planning on streaming the process on me making the prototype tomorrow hopefully.

Hey man looks awesome! Some great memories coming back from the Resident Evil camera type games.
Can I ask, the transparent lines you can sometimes see, what are they? Future layout of the room? How did you do that?

This is pretty cool, keep up the work!

No real update. Just letting ya’ll know that I’m streaming making this game. Came if you want to watch. http://www.twitch.tv/jvthewanderer

Refreshing. I like camera angles. I can visualize a marriage between Watchdogs and old school Resident Evil. Perhaps a Ghost Detectives plot of sorts. I subscribed to this thread. Keep up the great work!

Please Make some Tutorials and live Broadcast videos for your upcoming updates , Subscribed and followed

Update. My Game crash and it Corrupted My BP files. So I’m doing the Prototpye Game over again making it better than it was.

I will be Broadcasting Soon so if you want to see how I would do it you can come by My stream at http://www.twitch.tv/jvthewanderer

Update. I got almost everying Back to the way it was. What I’m going to do next is Work on Building the Test Level and setting up the Camera alone with Making more Blueprint Code for the Item and UMG. I just Hope it won’t Crash again.

Again, I will be Broadcasting Soon so if you want to see My Progress you can come by My stream at