Hi,
“Republic RT” is the UE5 LookDev tool I am working on. Here, showing my first public video with some of the current features of the tool. It is intended to cohabitate with any UE5 standard workflow and to help any artist to; visualize models while shading changes, create some ambience, compare between variants, lighting, getting quick renders, client presentation and… all that jazz :]. Focuses in “ease of use” and fast feedback, just import any model and attach it to the turntables, go in runtime and have some fun. 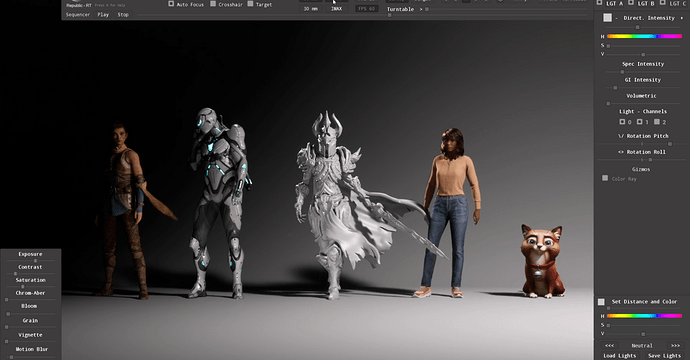 *Thank you so much EPIC Games for featuring “Republic-RT” in “News and Community Spotlight - May 26, 2022”. What a surprise! A huge motivation boost to continue with the development of the tool. 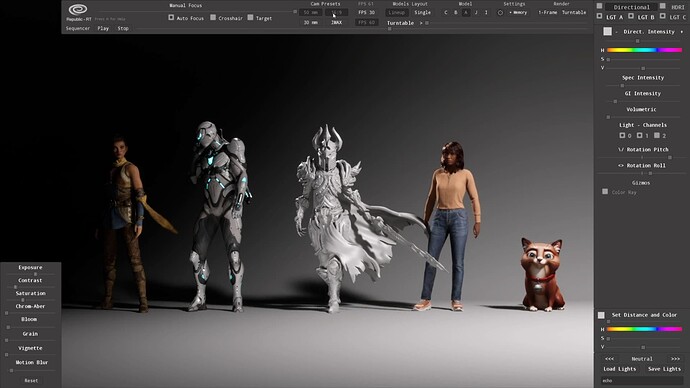 Here the link to my first public demo video:

Video reuploaded to fix a problem in the Credits.

A quick update to show how you could render a turntable of any of your models in one click.

Still working on customization settings for launching renders and taking “Snapshots” single frame renders. High Resolution Screenshot has probed to be terribly unstable. Is not gonna be easy, at least for me. But, time will tell

oh wow!! this looks amazing and very promising!
do you have a release date?

My goal is to finish before the end of 2022. It very much depends on how much time I can put into it and how much it will cost me to figure out how to achieve the remaining target features for the first release. Thanks for your kind words @mistercardenas

Love the minimalistic approach to the ui! I have a version of a similar tool I created but it doesn’t come close to the amount of customization you have on yours. Really cool stuff!

Hey @Thiago.Unreal, Thank you for your feedback!

Indeed, seems really challenging at this point to plan how the UI layout could be, where and how to add new features without overloading it, trying to keep it very simple to use and at the same time have as much as possible “on screen” so users do not have to go nuts opening and closing plenty of taps, having most key features in a handy place all time. Complicated, but I have to try to keep that “minimalism” you speak about, some how.

I am curious about that similar tool of yours

“My idea” if I could call it mine… Is to attract artists, that are not familiar with real time technologies, to UE5. Create something really easy to use, so any body can just jump into some of the most fun things to do IMO; visualize models, placing a camera, adding some mood, getting some quick renders, prototyping, and overall, why not, have an enjoyable experience without struggling with the pretty steep learning curve of UE. This can create some interest in the technology, and individuals could potentially start diving into the “massiveness” of Unreal, after getting a little idea of what they can do with it. I would also like that most experienced users could profit from some of the tool features, but won’t sacrifice the simplicity of use.

If you allow me, I would encourage you to continue your development, sure that we are not the first, nor the last, to prototype a similar tool, but probably, most of us do not share the same goals/ideas and we won’t be doing it the same way. At the end, there is more to choose from, which is usually a good thing.

haha mine is just a blueprint with some hdrs and light positions and light scenarios, not even close to what you have. Just enough to run a turntable of it.
I LOVE your tool, cant wait to use.

I love this tool. Can you add the possibility to load a HDRI scene for background and add a way to render only the character or whatever with alpha channel for compositing in another software? It will be a perfect tool adding these two features to work with internet avatars. Good work.

The feature of getting separated layers from Model and Set/Background it was already on my list, but as you requested it, I thought it could be a good idea to start putting it into practice and see if it would work as desired. Here is a little video about it:

Music: It All Begins Here by Borrtex - Artlist

About the HDRI Scene/Bg, not so sure about this yet, indeed the management of HDRI seems still quite complicated, and even if I gave this as done, when updating the project from UE5 Preview 2 to UE5 release, I got some unexpected results that I am still trying to work around.

In any case, it is not a target feature to have a HDRI background (visible to camera) as it is in, for example, automotive tools. I might get the “total” solution for HDRI management but this is for sure a long term goal that probably won’t happen in the first release of Republic-RT. My goal for HDRI implementation, by now, it is to emit light and render reflections, as anybody could expect, and be able to rotate and switch between them in real time, which is actually working already but still not in a very efficient way.

I do prefer to explore the chance of implementing a sub-level (any user created level or from Marketplace) so characters or props can be viewed and light/rendered inside a context, using for the set the Directional light, HDRI and fog, and beauty light the model with the 3 Rect lights.

Thank you for your interest in the tool

*Big thanks also to William Faucher, for his excellent tutorials, specially, in this case, the one that has teach me how to setup these Stencil/Render Layers Wow. Very nice to see the alpha and layers implementation. Good job. Anxious to see this in marketplace.

Is that a standalone tool or an Editor one?
Cause EULA makes life harder if Editor Code is involved.

I think, from the description in the first post, you could guess that it is a “Project based” Tool.
Republic-RT is nothing more than a UE project with some functionalities created using Blueprints (“Editor Tool” then? ). I have bought some VR locomotion systems, (for example) in the Marketplace, that are distributed in the exact same way I would like to do with the tool in the future. UE5 project files that are downloaded from Marketplace.

*Here is a little update that shows how a user could “Transfer” values of the light rig from Runtime to Editor using Sequencer. I hope this shows the nature of the tool in a clear way:

Sure, I have to do a lot of digging before putting the tool in the Marketplace, but I understand, this should not be such a big problem right???

You mean that if the project is not stand alone, I could not Register the name of “Republic RT” and things like that?

Could you please be a bit more precise with those legal “difficulties” I could face? Even if it is in a very brief way, I would really appreciate if you could share a bit more of your experience/knowledge in this matter

Thank you for your interest!

I am quite excited exploring these new features; “Context”, “Basic Sequencer Control” and “Seq.Cam” 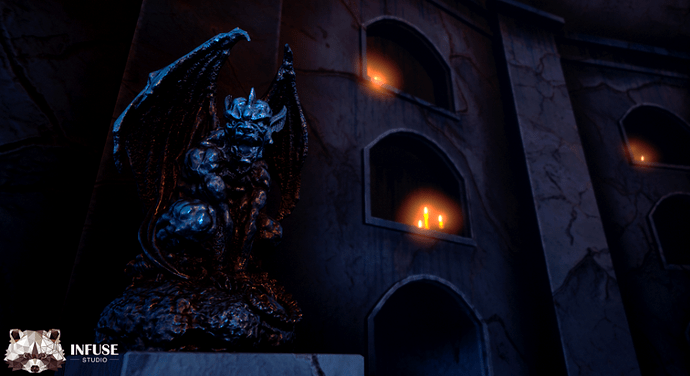 Medieval Dungeon and Crypt with Modular Meshes and Beautiful Props.

This is what I was speaking about before; to have the chance to load a migrated sublevel to add some “Context” to the models.

I wonder if you find this feature useful, would love to have some feedback about it

Indeed it came out to be a lot easier than I expected, thanks again to other two kind youtubers that shared their knowledge with us.

The sequencer basic control was a much tougher nut to crack dou… But still, very happy that I did achieve this, as it is gonna help me to evolve to some other target features having this foundation.

Which is nothing more than the camera inside the active sequencer, with a couple of manual focus keyframes, set up in editor.

Republic was born as an UE4.26 project with a single button that was turning on and off a light over a plane, using my beloved, but outdated, ASUS ROG laptop NVIDIA GTX 960M. Mixed with the very basic “UE4 - Real Time Turntable” project I did around a year ago. At that point I got the “unreachable dream” of doing my own lighting tool, which I could use as a very modest “Pipeline Solution” to help me light and render a short film or at least some shots in a way I could have some fun making character lighting. Now even if this is still light years away from happening… I can see it, somehow, becoming a reality in a distant future, very very far away, but… it may even be possible!

Please, do not judge me too hard about the set lighting and design in the video, it is a pretty old project I used for a VR demo I was doing for the Oculus Quest 2, and my very first attempt to create a level using modular assets. Adapted it as quickly as I could to UE5 Lumen. Torches and the fireplace do not have any color or intensity variations, and overall, it is really “monochromatic”, still, serving my purpose for the demo by now.

It is really nuts how well characters are integrated by lumen´s GI, to the point that it will probably become a problem for a quite picky lighter like me. I wonder if EPIC is gonna surprise us again with some “GI blocking” solution, so we can fine tune it over characters or in the set, through shaders or with gizmos similar to the “ColorCorrectRegion”.

Here are the youtubers from I have learned to implement the “Context” feature. Thank you guys!!!