I get this after opening my converted project in 4.9:

What steps can I take to reproduce this on my end. I attempted converting a project from 4.8.3 to 4.9 but did not see this error. Are there any specific steps I can take to reproduce this on my end? Did anything get moved to a new folder before converting? If you could, Gigantoad, can you post your callstack and crashlogs so I can take a look? You can find these at \Unreal Projects\PROJECTNAME\saved\logs.

Add me to the list. Running fixup crashes the editor.

Mostly same errors here - I converted from 4.7 to 4.9 - I have a fair amount of Matinee curves in the level. (Only thing I can think of that would throw animnode errors)

I had this issue too. I have my unreal projects on my F drive and Unreal engine installed on my C drive.
When opening my project for the first time i selected copy my project and open option, when the project open this the above picture is what I got.

(Side note: After trying to package my project and getting errors about : being an invalid character in my path, so i copied it onto my C drive, and still got this error)
[link text][1]
I’ve attached the entire contents of my saved logs folder for this project.

Same errors here, I’ve updated my project from 4.8.3 to 4.9. I’m also with a lot of warnings on the message log at the map check, it says that the objects are externally referenced.

Yeah, I get the map check warnings too.

Do you get the same errors if you create a clean project with starter content in 4.8 and convert it to 4.9? If not, do you have a sample project that is experiencing this error? I’ll be happy to take a look. I’ve tried several project conversions but thus far haven’t been successful in reproducing this on my end.

I had this issue occur for me and the only fix I found was to migrate my entire project over to a new 4.9 project. Once I did that the errors went away. Not to say there aren’t some other hoodiddy bugs in 4.9 right now that I’ve come across in a matter of seconds as well but that’s how I fixed this particular issue for me.

So I went into Engine.ini and deleted all those redirects. I expected that would break stuff but everything seems to still work just fine and the errors are gone. Remind us again what we need those redirects for?

I get same errors after project conversion from 4.8.2 to 4.9

And, when I launch on Mobile Preview, I get this errors with same “ActiveStructsRedirects” problem with my ModifyBones nodes. After this errors, total black screen in preview window (My game is working fine with 4.8.2):

As posted in a related question by JanSordid. This worked for my project.

These lines where there before (in the .ini), must have been from a conversion process from a prior Version…

Please try the steps Sw1fty suggests here and let me know if these work for your error.

As stated earlier, yes they do.

So I went into Engine.ini and deleted all those redirects. I expected that would break stuff but everything seems to still work just fine and the errors are gone. Remind us again what we need those redirects for?

It worked for me but I’m still getting the warnings on the map: 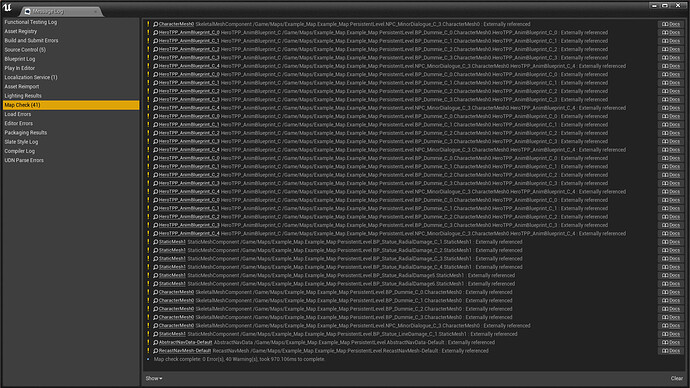 Anyone else experiencing this issue?

I did mine over again to help out with tracking this issue. Doing exactly as Sw1fty suggests worked for me. All my errors went away and everything is working correctly.

Same here, when i get back home will try to delete the redirects from Engine.ini I still don’t understand why we must deal with this redirects, i think is the most frustrating thing about the engine, specially combined with revision control.

Ok, I’ve managed to end all the errors by doing this:

All issues are gone now, I’ll just have to update the old Blueprint nodes to get rid of some warnings.

the Sw1fty steps crash the engine on startup for me

Edit: I made a mistake, actually the Sw1fty steps fixed the problem