Hiya, was testing out lighting in the new build and noticed some probs with ray traced distance field shadows. This is a simple sphere in an empty level with a single point light. As I moved the light around large ‘blobs’ of shadow were cast in wrong directions, and there was a persistance pinched top shadow on the sphere that stayed even when the light was directly above it.

Also directional lights still do not cast ray traced DF shadows at all, they default to cascades even when the light is stationary and dynamic shadow distance is set to 0. Other forum posts seem to indicated this is a problem mostly with AMD GPU’s. I’m running and R290x. No immediate need for this, just hoping someone’s banging on fixes for this issue still. 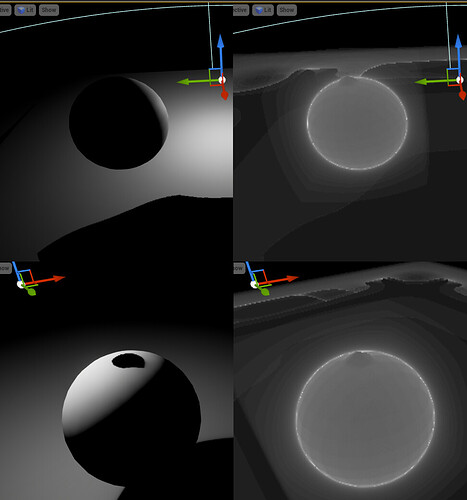 Thank you for reporting this. I’ve submitted UE-26783 for this particular issue. For the moment you can simply increase the distance field resolution to 1 in the Static Mesh Editor Build Settings to solve the problem.

Hey Tim, these guys were straight default objects which are set to DF resolution 1.0. I double-checked to make sure I hadn’t accidentally changed them, both the sphere and the cube are set to one. The sphere’s a static mesh 1 meter.

It actually looks like it might be the resolution scale is broken (potentially just on my GPU, the 290x), as changing it from 0-3 wasn’t affecting either of them. Same scene in 4.10 works as expected.