Hey guys. So I’m trying to achieve “rain” in UE4, I’ve found a couple of tutorials on the internet almost all of which mentioned migrating the rain particle effect from the content examples project to my own and try that. Firstly, that rain looked rather artificial to me when I happened to approach it. Hence I was looking for some way to achieve a more better (not necessarily real looking but just not out of the way artificial) looking rain.

Secondly, in those forum posts where I read those people spoke about particle systems could cost quite a bit on performance and the best way to deal with that was to “attach” it to my camera. Any clues on how I can do this? 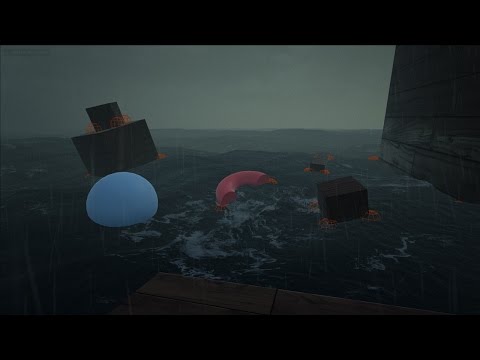 would be a perfect example of the type of rain that I’m looking forward to achieving and would love some help. Now I’m no where close to a UE4 pro, but the uploader has mentioned “The rain was made with a simple translucent particle material, has some downward velocity and is set to PSA Velocity for the stretching, you can also add some random X and Y velocity for turbulence, they are GPU particles for less performance cost﻿.”

If somebody could guide me through what I’ve mentioned above or atleast point me in the right direction by showing me tutorials, I would be really thankful!

Look at fighters, you can also try this.

I use planes that just LOD out to no geometry at their final LOD. Way more efficient than simulating hundreds of particle, and looks better.

Problem with particles is, imagine you go inside and then look out into the open, the rain will have disappeared, or, it’ll be raining indoors

I use planes that just LOD out to no geometry at their final LOD. Way more efficient than simulating hundreds of particle, and looks better.

Problem with particles is,** imagine you go inside and then look out into the open, the rain will have disappeared, or, it’ll be raining indoors**

This can be easily rectified, though.

Alright guys I really appreciate all your replies and here was the turn out:

Initially I tried using fighter’s suggestion however the rain planes ended very abruptly and looked plane like when it hit the flat ground, maybe I was doing it wrong (even though I followed all the tuts related to that particular video) and it looked pretty artificial. So I thought of trying the other methods mentioned.

I’m not exactly a pro with UE4 yet so what TheJamsh said was pretty complicated to understand. Or maybe I’m just stupid.

So I used a mixture of the methods that Narghile and Sgt mentioned and I like how it turned out, because it reached the ground more naturally and even bounced off. Here’s a picture: 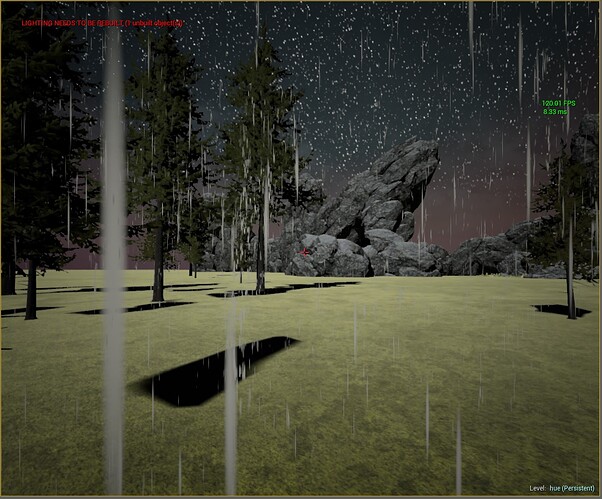 Don’t mind it looking super big because it looks fine in game and just because of the screenshot it looks big and ugly. Now I attached this to the camera and it gives a pretty decent illusion of rain wherever I look, however I’m facing a few problems.

The first one being as TheJamsh predicted, when I go under a roof and turn around the outside has no rain and it rains inside too even though I’ve put the particle spawn waaaaaay above my camera, and I’ve even added collision for it to bounce off incase it hits any object. However it still passes through the roof. JamesEmory did say there was an easy way to fix it, but I’m not aware of it. So some help there would be awesome. Here’s a picture of how I mean: 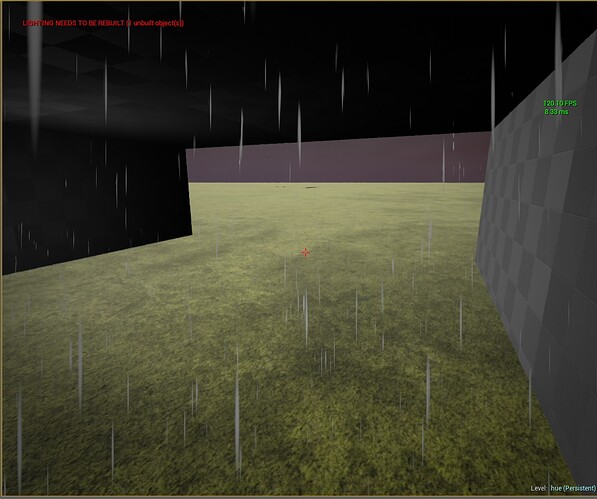 The second problem is when I look up towards the sky or origin of the particles it looks the same way it looks how its coming down. As in it looks like “lines” instead of “dots”, its not exactly in a 3d perspective kind of a thing and comes down towards me flatly. Its kind of hard to put it in words but if you do not understand I could record a video or a GIF to show how I mean. Here’s a picture:

Hope you guys can help me out!!

Try setting up collision in the particle editor and changing the reaction to kill. If the particle system is high enough, the particles should hit the roof and die. Also, if you have like set pieces (houses with doors, caves, etc) you can easily make a rain state, have some triggers in front of these entrances and have the game check if the rain state is set to true and if so, it can spawn another rain particle at the door/cave entrance so that the illusion of rain will still be kept. If you want to get more complicated, you can try a vertical line trace and have it check to see if it hits sky. That system is obviously more complicated, but just trying to give you some ideas.

Edit: Are those BSP brushes? If so, I’ve never used them so I don’t know how particle/collision works with them.

Thank you James so I’ve tried setting it to kill and firstly the rain started looking artificial when it hit the ground as opposed to when it was set to bounce. Secondly, even though the particle system is set super high above my camera and this time I tried with a static mesh with collision which is right above my head I can’t even jump because he collides with it. But the rain still passes through, I even tried removing it from camera and only putting the individual particle system way above the mesh but it still happens to pass through even when set to kill. First pic is with particle system attached way above camera and second is individual particle system.

I could try doing the rain state triggers as you mentioned but that would lead to rain switches being pretty abrupt. I would like to give the vertical line trace a go though, any thoughts on where to begin?

I’m about to try to test this out on my end and see how it goes. I’ll let you know as soon as I have something.

Edit: Yeah I can’t actually replicate your issue. This video is of a simple snow particle system and a wall that comes with the starter content, and as you can see no snow passes through the wall whatsoever. Can you post your particle set up so that I can try to see if anything is off?