Question regarding Migrating materials/meshes between projects

So basically i have a map that i’m using just to edit all the props that come along with making a complete ArchViz project, things like chairs and tables etc.
The idea was to have all that stuff in one map, and then on an individual project basis just migrate over the assets i needed to fill the building up. I’ve been making good progress so far, but i seem to have run into a bit of an issue. What i’ve been doing so far is pulling all the static meshes onto one big floor space, and then editing the materials by dragging them onto the model in the viewport, i know the other method is to edit the mesh itself inside the static mesh editor and pull the materials in that way, but it seemed to be a lot slower of a process. However, after testing a few and migrating them into another project, i see that it only migrates the original static mesh with its original blank materials as it would appear in the static mesh editor. I figured out a bit of a workaroung by creating a new static mesh off the one that exists in the viewport and migrating that, and it does work, but it doesn’t work very well for anything that isnt a combined mesh and is made up of smaller meshes together.
Does anyone know any way to migrate these assets that i’ve edited the materials of in the viewport into a new project whilst retaining their current materials (and ideally lightmass override settings too, but thats not a huge deal)?

That kind of sounds like a bug, there shouldn’t be a difference between selecting a material in the dropdown and dragging materials onto objects. You could try right clicking the folder where the static mesh and materials are and do Fix Redirectors in Folder (or whatever it’s called).

If that doesn’t help you could export and reimport and see if that brings the material along with the mesh.

Hmm, I tried the Fix redirectors method but it doesn’t work, i’ve been moving the contents around a lot to better organize the folder heirarchy, so pretty much everything has had its redirectors fixed.
I’m not sure if i explained the problem as thoroughly as i needed to, so i’ll try post some screenshots that might help.

Basically, ‘Door 10’ was originally a .max file, i exported it as an FBX, and this is what it looks like when it’s straight up dropped into a level as-is with no modifications: 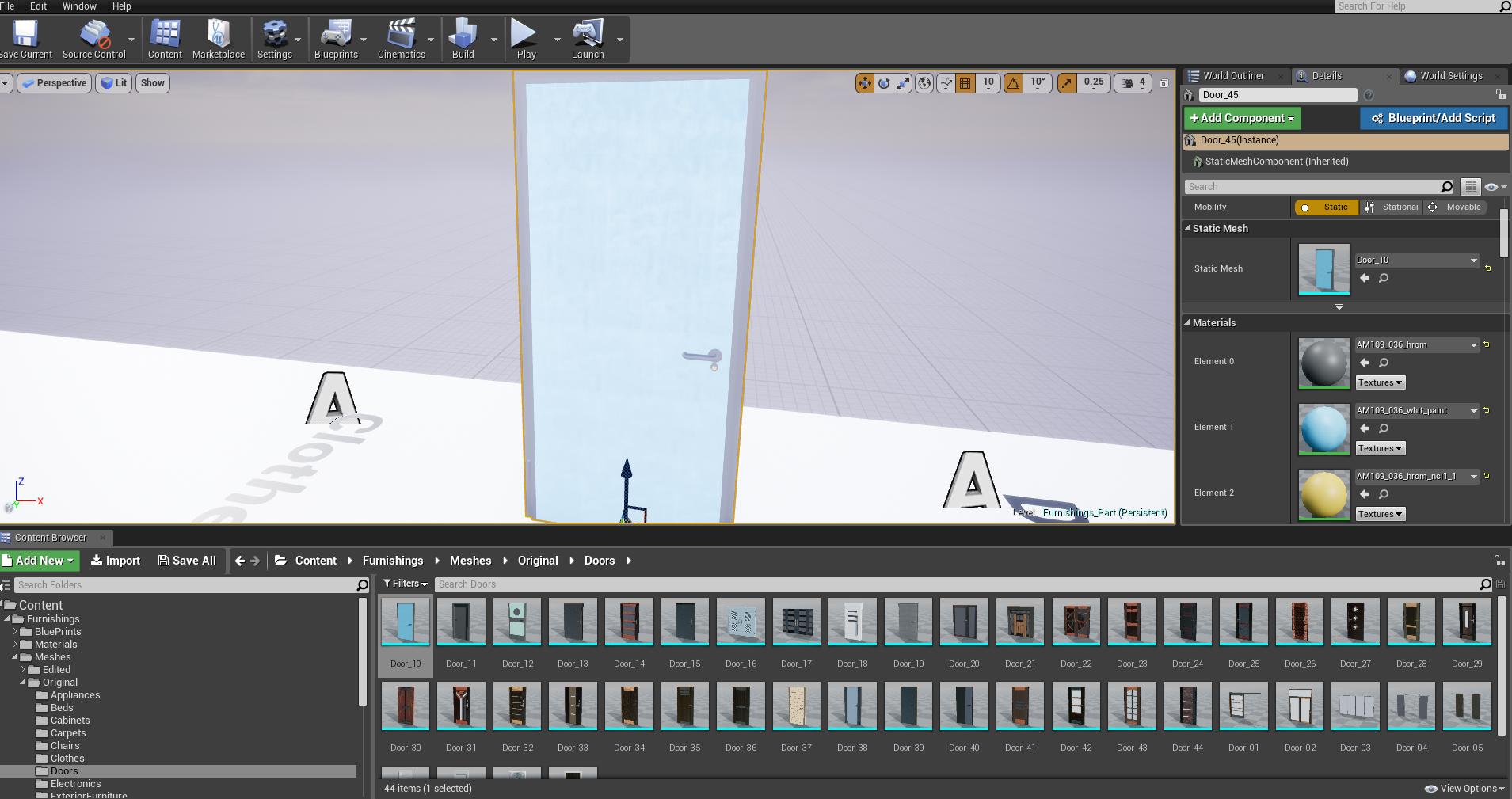 Then, if i take some materials and drag and drop them onto the door that’s placed in the level, it all looks good: 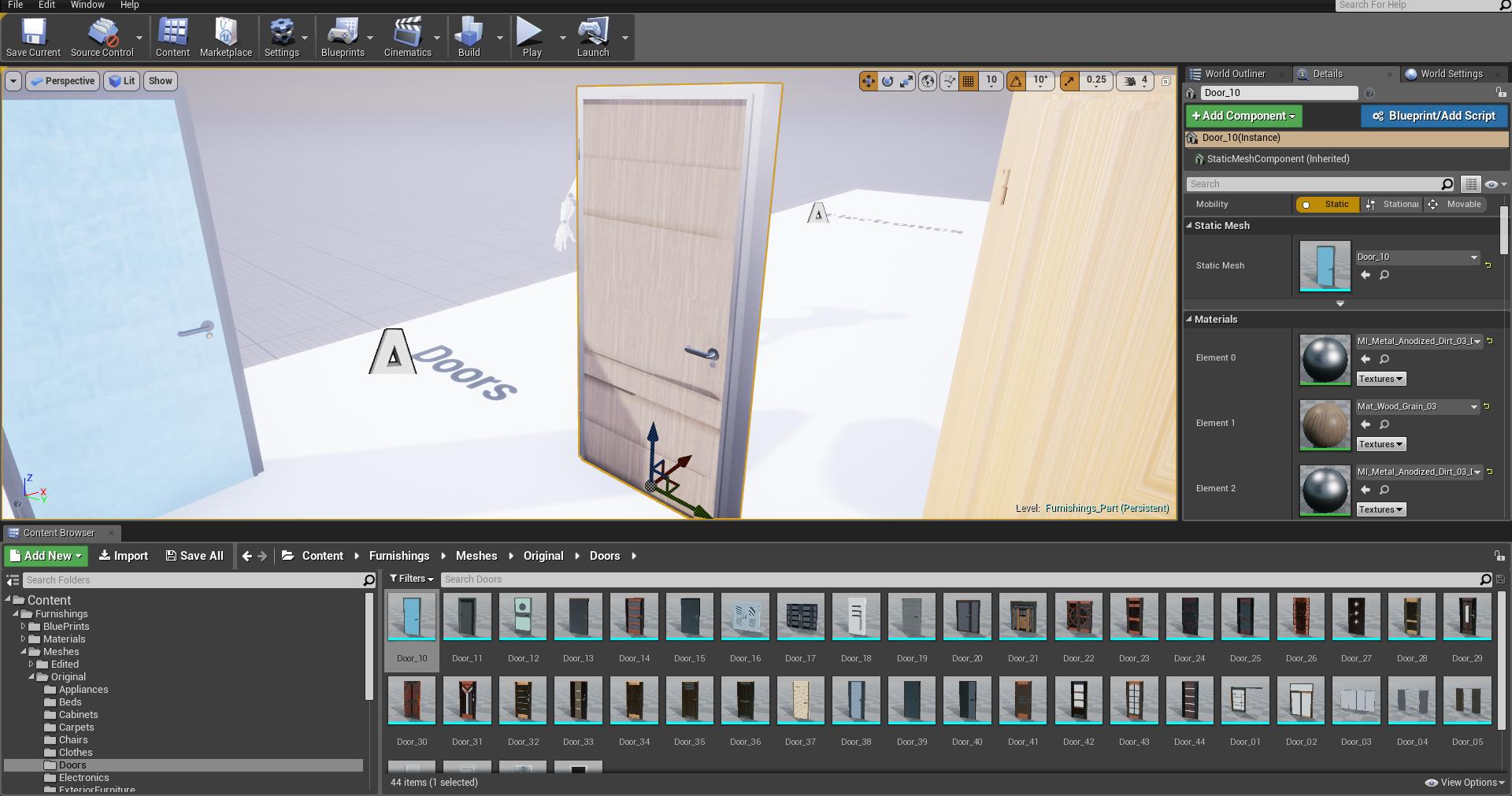 However, if i browse to the asset back in the content browser, the preview still looks like the first image, and if i try migrate that asset over to another different project, it migrates with the original materials (from image 1) and not with the materials placed on it in image 2. Am i perhaps missing a step? I feel like there could also perhaps be an issue with the project itself as i had another unusual bug earlier on with mips that required me to turn off texture streaming, so i suspect there may be something unusual going on with the project.

EDIT: I feel like i should add a little more info: Changing the materials inside the static mesh editor makes it work perfectly the way i need it to, but with a lot of models or when meshes are broken up into a lot of smaller pieces it becomes quite a lot longer of a process than editing it on the map floor, so it does work, but its a much bigger time sink and i’d prefer not to do it that way if possible.
Also, changing the lightmap resolution (say from 64 to 128) does not transfer over either when the asset is migrated (in the new project the lightmap res ends up being some weird number like 4).
And lastly, this project is actually a duplicate, i wanted to edit the materials on a cloned project in case i messed something up i could always go to a backup, is this perhaps the reason why i’m encountering bugs?