I see in Unreal Engine’s Source directory there are a number of third party tools. How do we use them in our projects? For example, I tried to run sample code straight from libcurl’s website, but it won’t work. Pressing compile into the editor says libcurl can’t be found. I am new to C++, anyone willing to help? Thank you!

First and for most you should use UE4 APIs as much as you can, there 99% compatible with UE4 types making things a lot easier, all you see in ThirdParty as libraries used in UE4 and power of it is accessable thru UE4 APIs. UE4 provide HTTP APIs it is where libcurl is used by UE4, here is example how to use it:

I need to read a sequence of bytes stored in a basic txt file which can be found at a specific url. With a local file path I can use SaveFileToArray() function to store the bytes in a uint8 array, how can I do the same with the given file url?

But if you really want to use libcurl, looking on HTTP module you just need to add this depency in to build script (*.cs file)

And do those includes in cpp:

Thanks for taking the time answer. I am getting this error: fatal error C1083: Cannot open include file: ‘Curl/CurlHttp.h’: No such file or directory. I placed this in the correct place, right? 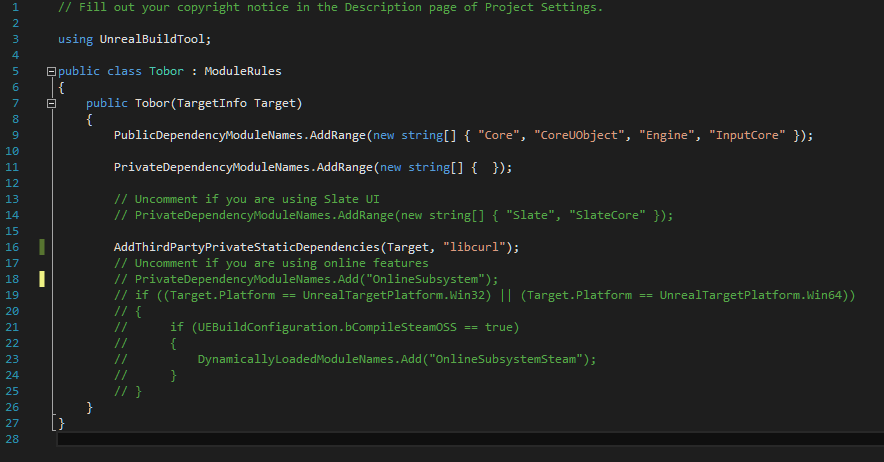 [Help]How to connect to a smtp server?

I use the FSocket link to the specified SMTP server, but I found that when the server sends an ACK request when the FSocket did not respond. Is this an FSocket defect? Or is it because my setup has a problem?

it doesn’t helped to me. I was trying to run basic curl c++ script uploading audio to server and receiving server response as a json data. And the same script i am trying to run on ue4. But there is no library as #include , i tried to add AddEngineThirdPartyPrivateStaticDependencies(Target, “libcurl”);
AddEngineThirdPartyPrivateStaticDependencies(Target, “OpenSSL”); to MyProject.Build.cs but it does brings a list of errors

Long list of errors which i am receiving by adding AddEngineThirdPartyPrivateStaticDependencies to build.cs empty thirdperson c++ project

my ue4 version is 4.23 on mac OS, if it is matters. I want to run a sample c++ code on ue4 project, http solutions which does have ue4 is not enough for now