i am wondering if UE4 can make **semaless ** planet/land transition like this one : 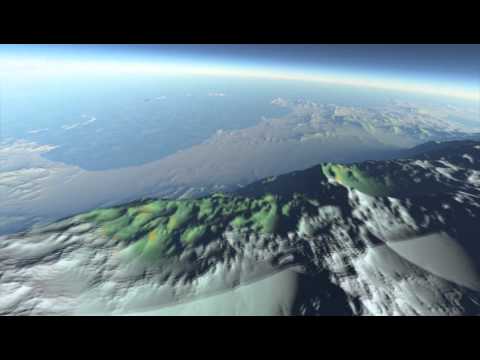 any orientation, idea, hint is welcome .

thanks and good day .

Just some things that pop into my head:
Note that it “pops” in more detail as they get closer, this is either done by pre-built lods, (not likely as the highest amount of detail over the entire surface would be crazy to store.), or by calculating the height map as they go.
If they are using a “stable” noise algorithm for the terrain that is based on x,y co-ordinates and never on it’s neighbors it shouldn’t be to hard simply running as many iterations as they have time for.
They likely store this data in a “height map”, or compute shader alternatives, and then generate geometry based on that. Either with tesselation or compute shaders.
Colors seem mainly based on height. (This video seems to only be in 480p, I wonder if they rendered it at that resolution?)

What you need to worry about is not simply the transition itself, but the amount of compute power, (cpu and/or gpu), to render it in addition to your game and all that stuff!

If you want places to look for how to generate terrain this way, look at noise libraries! EX: http://libnoise.sourceforge.net/

I’ve been playing around with some ideas I’ve had (for a very long time) about generating planet sized terrains for an open universe sci fi game. I’ve managed to get a couple of very basic things going, so I thought I’d start a thread here and show...

Look, you need to clone yourself ioFlow Studios… We can’t wait any longer

this is sort of thing is a wet dream of mine. i hope you can pull it off.
actually it would be awesome to have a donation or a preorder system to support clever and hard working people developing plugins and stuff like this.

@Zicandar : sorry i picked up the first video

btw : thanks for the pointers
[MENTION=887]ioFlow Studios[/MENTION] : i agree with franktech , you have to clone yourself !
also please consider the option of using real world data for elevation
http://earthexplorer.usgs.gov