The planar reflections released in 4.12 work a treat! Really impressive!

However I’m trying to use it in a VR project I’m working on and it’s not quite there yet…
I have a scene of a mountainous terrain falling into a lake. The scenery reflects perfectly in the lake when I keep my head still (or move it very slowly) but if I move my head faster than a certain speed the reflected texture doesn’t lock to the main pass (well the main geometry + materials of the lake) it slides separately from the rest of the world with a slight delay, I think, which ruins the immersion experience.

I know rendering Planar Reflections requires extra resources so may not be recommended for VR because of performance issues but on my system I don’t see any judder, fps is a steady 75 max (on a GTX970 which the experience will be run on) so I don’t think it’s the extra rendering demand per se which is causing the issue.

Has anyone tried Planar Reflections in VR before? I wonder if anyone could point me in the right direction as to the source of what’s causing this so I can research further to see if there’s a workaround or something that’s fixable in the future?

Many thanks for any help / hints, I can give more info if needed but it’s a bit hard to give screenshots of the issue as it only happens when the HMD is in motion.

I have roughly the same type of scene. My planar reflection lags behind everything else, significantly. I’m on the HTC Vive, Instanced Stereo enabled.

I have a similar problem but my reflections are not just lagging , they are just way off when you tilt your head in VR (I`m on Oculus cv1) and look at an object up close
this is being illustrated by the following screenshot 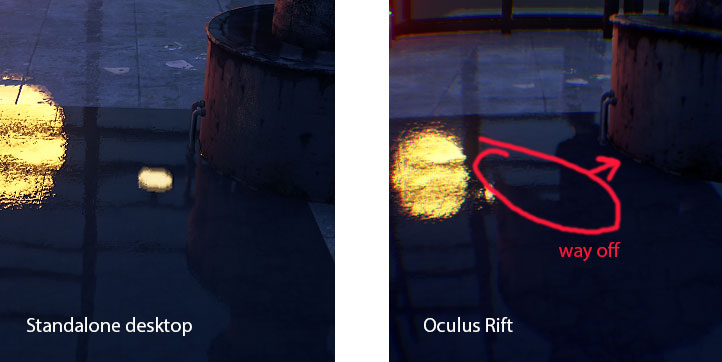