A set of virtual production tools designed to be used both in editor or in a packaged scene.

Plan V Tools comes with a controllable camera system that will easily turn any level into a navigable 3D environment that can be packaged and shared across team members, clients … It was designed to package some features you’d typically only find in editor such as taking screenshots and multipass renders (Lit/Unlit/Normals/ObjectID/Depth), toggle layers (VFX / Set / Studio / Characters), a timeline to playback any level sequences, and a storyboarding tool. These are all tools that tend to be very useful to artists across industries who don’t want to learn Unreal Engine to have a quick look around a 3D environment.

In addition, some of these tools are also accessible directly in-editor allowing for users who are already working in Unreal Engine. For example, the storyboarding tool can easily convert boards into level sequences allowing you to go from the idea stage to the final render stage within a couple of clicks. 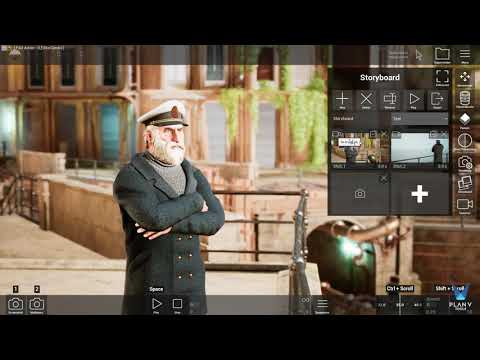 Hi, I bought this plugin last week and installed it today. Fresh out of the box, looks to be broken. Is this being worked on? Anything I can do? Thanks

It seems the TakeRecorder plugin isn’t enabled in your project (Plan V Tools should enable it automatically).
Try enabling it as followed:

We will be pushing an update in a couple of days, we’ll make sure this issue is solved.

EDIT: The update has gone through, this issue should now be solved, make sure to update the plugin via the Epic Games Launcher.

Hey, thanks for the reply but it appears that the TakeRecorder plugin was, in fact, already enabled in my project. I disabled TakeRecorder, Plan V Tools, and Virtual Production Utilities and then re-enabled all of them to see if that would jump start it but no such luck. Sounds like I may just have to wait a few days for an update.

I have same TakeRecorder problem. I hope the fix is coming, maybe with 4.26 update?

Did you make sure the TakeRecorder plugin is enabled? If it is, could you try disabling it and reenabling it before restarting the editor (it will say Plan V Tools needs it, just temporarily disable it too).

It should automatically be enabled when activating Plan V Tools but it seems to be oddly inconsistent.

EDIT:
We found two temporary solution. We are working on a fix.

The latest update should have solved this problem, please get in touch if it you’re still getting issues with this.

Plan V Tools is now compatible with Unreal Engine 4.26. All editor and runtime tools (including packaging and VR) should all be working as expected.

There is currently one known issue, the Object ID viewmode will only render in one eye (affects only VR mode).
It has been flagged to Epic, we’ll update the plugin as soon as we have a fix.

Plan V Tools now is now compatible with Unreal Engine’s Variant Manager (see Official Documentation). The editor side allows level and set designers to set up various layouts and object arrangements in the same level. Once set up, these variants can be toggled in a packaged build of Plan V Tools.

Several tools to facilitate the live recording of cameras were implemented. When using Plan V Tools in-editor, a “Record Tool’’ button is visible on the top right of the screen.

Attach to object: You can now attach the camera to any moving object in the scene by holding shift and clicking on an object. The camera will follow its movement while keeping the ability to move around it. This can be useful for any vehicle shots, where the camera has to follow the vehicle at an offset.

The timeline has been slightly modified and now features a search bar, optional filters and the ability to look for sequences in the project rather than the ones in the level (enabled via plugin settings, for editor only). Filters can be activated by nesting sequences in a folder with the tag “PVT" or "PVT”.

VR mode has had a couple of tweaks including a better screenshot tool, improved navigation and the ability to display the controls by holding B.

Please note that we have switched to an Oculus Quest 2 for VR development, and although Plan V Tools is still compatible with Steam VR there might be some slight inconsistencies depending on the headset.

Sequences can now be linked to storyboards. Saving shots while playing a sequence (in editor and at play) will now save the playing sequence and the current frame. Pressing the “Go To Camera” will now not only restore the camera position but also the animation that was playing when the shot was saved (if it still exists). Moreover, converting a storyboard into a new level sequence will automatically add these animations and time them accordingly.

We can now use live link sources to control Plan V Tool’s camera. Simply set the device selector to live link in the Virtual Camera interface and make sure your source is connected as a Transform source.

Following recent updates to the Unreal Remote 2 app, using an IOS device isn’t as simple as it used to be. On 4.25, these devices are now only used for tracking purposes. On 4.26, in order to get the tracking and touch input, IOS devices need to be setup as live link devices.

Take Recorder errors: This issue, caused by direct references to the TakeRecorder plugin should now be solved.

**Editor camera tool: **Some slight improvements were made to the editor Camera Tool including camera presets which were originally only available when running Plan V Tools.

**In-game controls: **Controls are now displayed by either clicking the controls reminder (top right of the interface) for keyboard and controller or by holding B or Y in VR mode.

Thanks for the update. I still have a problem. If I record with take recorder and after that render the final video clip with sequencer, there is always the PlanV user interface also rendered in the picture. I can’t prevent that. How to do that?

I think changing the game mode used to render the sequence would fix this.
In the Render Movie Settings, find the Game Mode Override setting and set it to **GameModeBase **as shown in the screenshot below.

Changing the game mode used to render the sequence would fix this.
In the Render Movie Settings, find the Game Mode Override setting and set it to **GameModeBase **as shown in the screenshot below.

Thank you! It works now. I spend whole evening trying to record video clip with take recorder and using sequencer and movie render queue. I managed to make it work somehow. Also I have ByOwls virtual plugin for android and it works fine with PlanV. A simple tutorial (maybe into youtube) about how to use take recorder with Plan V and how to render final video clip would be helpfull for many.
Only way I could make this work was:

Yes that’s pretty much the workflow when using Plan V.

However you don’t need to manually open the take recorder and add a camera, Plan V Tools will automatically populate TakeRecorder’s sources (the actors that will be recorded) with a CineCamera (that matches what you see on the screen) and any animation that you are playing via the plan v timeline while recording.

A tutorial for this is a good idea, we’ll try get one up soon!

That is the problem, at least I have that: take recorder opens, but it is not populated by anything. I have to put there something myself. Could you check if there is something to be done, some setting or something in the plugin?

Okay, I’ll be looking into it, can you tell me what engine version you’re using?

Also, when you run Plan V Tools via the Plan V button, can you see an actor called “PVT_TakeRecorderSources” in the world outliner?

Okay, I’ll be looking into it, can you tell me what engine version you’re using?

Also, when you run Plan V Tools via the Plan V button, can you see an actor called “PVT_TakeRecorderSources” in the world outliner?

I use the newest 4.26.1. Yes I can see that PVT_TakeRecorderSources.

I just made a new test level and in the first start the window in below popped up. I started it anyway. It seem to work similary as my previous level. Take recorder opens when I click recording, but it is empty.

Well, I can manage with it now that I have learned how but if there is something you can fix in next update then that could be fine.

This is a cool plugin for recording a virtual camera movement for video.

Wow those compilation errors are quite unique! We’ve sent a new update which has fixes for both TakeRecorder and some of the VR components. It should be available to download now via the launcher now.

If the update doesn’t fix the issues, could you send us a copy of your log file?

You can post the file here or send it to dev@paintingpractice.com if you prefer.

I sent you email.

I am also wondering isn’t there anybody else having the same errors, or is it just because of my computer.

For anyone else with corrupted blueprints, reinstalling the plugin should do the trick.

As for TakeRecorder, the record button might need two presses if the TakeRecorder panel isn’t opened or visible.