I am rendering out an animation using path tracer on a 3080ti. The hardware monitor is showing that my GPU is maxing out at around 54% usage. Is there a way to increase this in order to get faster renders?

You’re probably CPU capped then. While yes, you’re path tracing with the GPU, you still use a bit of CPU along with it. Your task manager will lie to you on CPU usage and make you think you aren’t, but you have to remember that UE isn’t necessarily going to use all of your cores fully.

What CPU are you using?

Hey, thanks for the reply!

Took a screenshot at the peak CPU usage, you’re right, it is using more CPU than I was expecting, not getting capped out there either though. 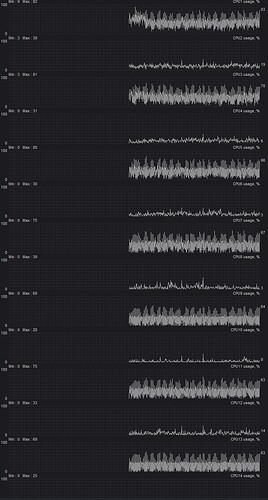 Yeah so basically, there’s some kind of hitch going on between the CPU<>GPU. I’d guess that the GPU is doing some work, sends it back to the CPU, the CPU resolves some more math with the new data, then decides what the GPU needs to do next, tells the GPU, rinse and repeat. Which sounds about right for path tracing.

You might also try to make sure that it’s not being limited by framerate or something as well, like check the project settings to see if you’re running a fixed framerate like 60 or check your vsync settings in the editor and Nvidia control panel. I’m not sure if it’s one of those things that is tied to a framerate or not, but it’s worth checking out.

Ok, so if I render remote instead of local it actually uses 100% GPU, though one of my scenes is crashing when using the render remote method :-/