Particle Emitters no longer show up in viewport

To clarify, I always see these 2D starburst icons, even with Particle Sprite turned on (as shown in my screenshot). Picture included to show you just an example of what I mean - all of our particles look this way to me, regardless of the settings I’m using (even tried to hit “Use Defaults” everywhere possible to reset everything)

Anyone have any ideas? It’s making it difficult to, you know, position them correctly when I can’t see them. Thanks 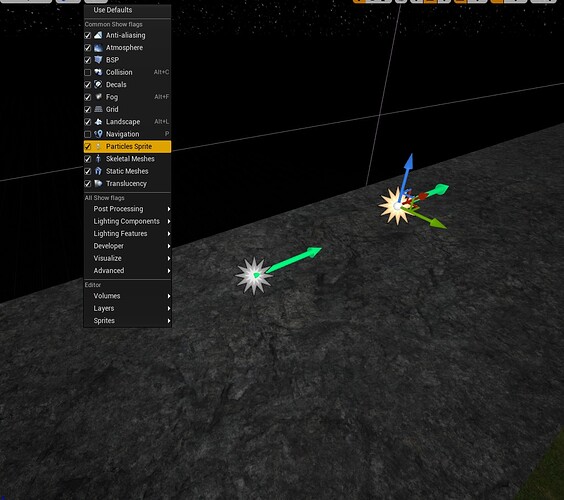 Is your particle emitter configured correctly? eg, when you go to edit it, it appears how its supposed to?

Not set to hide in editor or hide in game anything silly like that?

Well, they work fine in game. I just can’t see them emitting in the editor.

I don’t see /any/ of our vfx in the editor, but I’m also not sure how I could set them to hide in the editor outside of going to Show and unchecking Particle Sprite, which I have checked. Toggling that option does nothing in my actual project, but works fine if I make a new starter project, for example

Figured it out accidentally while trying to do something else.

In the upper left of the viewport is a drop-down triangle. Viewport Options-> “Realtime” had become unchecked somehow, so its option for realtime rendering in the viewport was off.

I have no idea when/how that got shut off, but that’s why the particle sprite option specifically wasn’t doing anything.

Lost 2 hours on the same problem…epic-facepalm.
Thanks for giving the solution

Thanks this was a pretty derpy mistake, I wonder how this can be unchecked by accident

I had the same problem last night until I saw your solution today!!! thanks for the answer !