During our production, we have come across a problem. The game is a top down Isometric game, Legend of Zelda: Link to the past style. The question I have is as follows:

When putting assets into the engine, for example: rocks, gates, buildings, etc. One would want the assets to have the illusion of depth based on collision. We want to create the collision boxes that when the character approaches the assets from the front, he will collide with them, but it will seem as though he is in front of them because he will have higher translucency priority than the collision section. As for the upper half of the asset, we would like to achieve the illusion of the character to be able to go behind the asset (no collision).

How would we be able to achieve this effect?
I have tested by making two different sprites: one for each section of the asset using the “Edit render geometry” tool in the sprite editor. Making the top part of the asset have a higher translucency priority than the character. Would this be the correct approach? Using this approach, you have to make multiple sprites for the same object and then crop and place them perfectly to give the illusion desired, which leads me to believe there is a better way to achieve this effect.

Thank you in advance for your help! 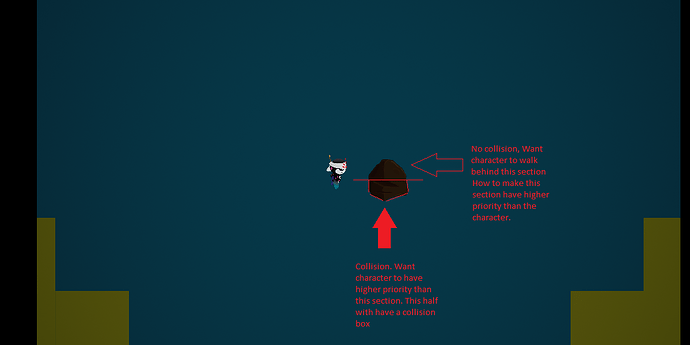