Well my current issue is that I am not shure why my object doesn’t trigger an overlap Event. I read the documentation and thought I understood, still it does not work as expected. SoObjects are Physics objects and the do interact with each other on the plane with physics collision. My ship is an actor that is controlled and generates overlap Events. Because I am on a 2d plane I thought it is smarter to do overlap Events and not hit Events with my ship. I have a “smart” enemy, which has the same collision properties as ship1. They both interact with each other- say they check for overlap and execute. But why not my Object,wich has to simulate physics with other physics objects, but should generate overlap Events with my ship and enemies? Thank you in advance.
PS: another thing is that when i do a camera shake of the scene, my objects kind of flicker during it while my enemies and my ship don’t. Whyyyy? 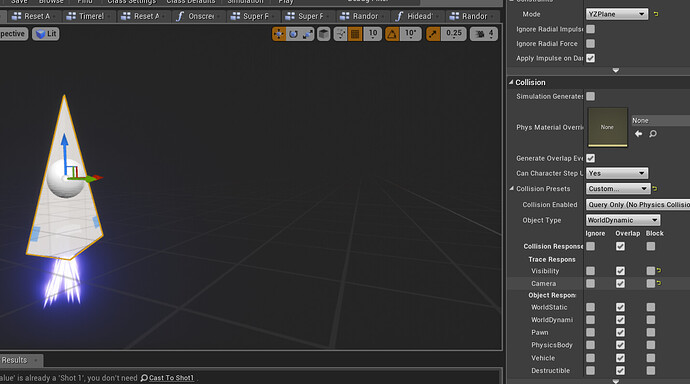 Do you have a screen shot of the blueprint you are using to execute overlap events between ship and object? 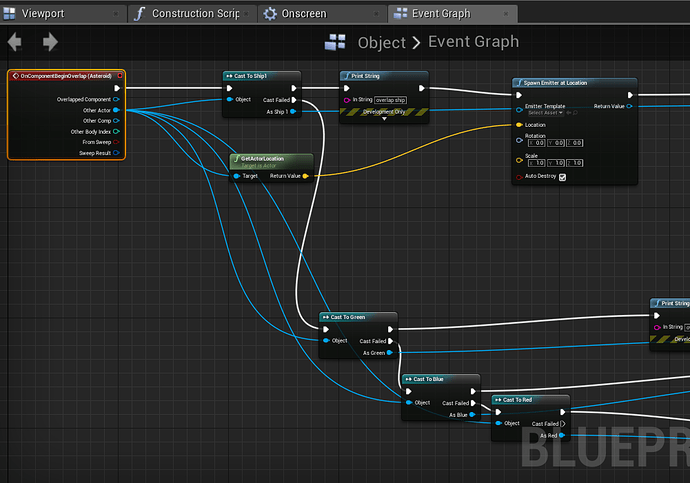 My Ship Actor does not handle any overlap Events. The Actors themselves do that. My ship only handles it’s own Actions.

I did all you said and stil no luck. I even set both to overlapp la just to see if anything happens and for gods sake nothing is triggered! I mean, why is this happening? Today’s not my favourite Unreal Day.

In that case if you can’t even get a simple collision box to fire an event you might have a corrupted blueprint. It happens transient, try duplicating your blueprints and test it with the duplicated versions that’s the quickest way, if that doesn’t work I copy paste the code and remake the variables in a brand new blueprint. It sucks but honestly if that’s the case and the logic males perfect sense and simple things don’t work, spending the time to redo your work as oppressed to trouble shoot a corrupt file is going to save you in the long run, and spare you further frustration.

by the screenshot you’ve supplied, i think it could happen if you set onComponentBeginOverlap event on a different mesh. ensure that you really mean the Asteroid mesh.

each mesh component has it’s own overlap event.

also make sure you print string in any case of the overlap event (maybe one of the branches doesn’t have a print string so you think it is not triggered, while it is but just the logics are messed up) 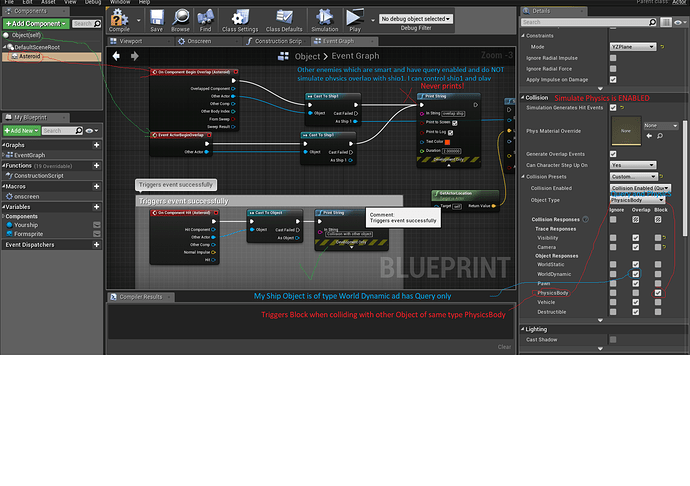 my newest attempt. I am pretty desperate now.

I did that on both fail Ends. Unfortunately nothing. I#m like for 100% shure overlapping the object with my ship and nothing is triggered

Print a string from the “Fail” output pin, see if it triggers the overlap and fails to cast to the ship

I noticed the bottom of your very first image in this post it says something about casting to “Shot1”…but now we are casting to “Ship1”. Are those supposed to be the same name? Is something misnamed in your blueprints?

Also, I don’t know if you tried my other suggestion yet, if you haven’t I would reconsider adding a separate box collision to your Asteroid and see if you can get overlap events to trigger using that.

can you also show the collision settings of the Ship class?
notice that if the ship’s type is PhysicsBody too, an overlap shouldn’t even happen because you set it to block in Asteroid 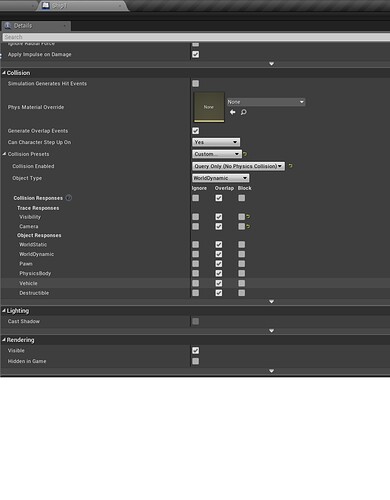 Guys I feel bad for taking your time. But still - it won’t work. Added box collision with physics properties and hit Events enabled but no Response. One Detail I have to mension is that the “object” exists multiple times so there are many “objects” in the Scene. maybe some eference issue? but that would not explain why tohe nirmal casting method in my smatrt enemy actor works as expected and there are many smart enemies, too. Guys I’m trying very hard here :((( I feel very stupid

So now the fail casting is triggered, BUT- randomly.
So I see the object flying and at some Point in time it prtins “failed” from my blueprint.
Then I made it that just ONE object is spawned.
But when i overlap with that single one nothing is triggered. And with multiple ones,too.
Just this random print. This is such a nonsense!
I’m stuck at this point in my development cause I’ve done everything, but the next steps, like the shield, which require to block the physics actor “object” but add a efvent on overlapping with my smart enemies.
Thank you for your time, I appreciate it

I’d wish you were right but this is my total Setting now: 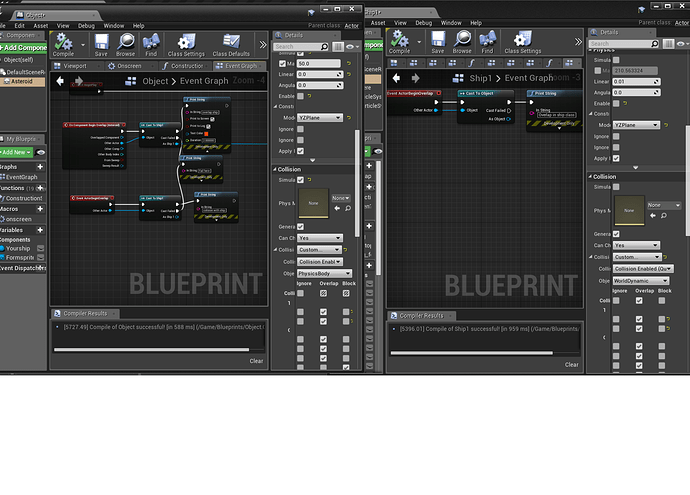 See that the object class has physics enabled. I have the assumption that this causes something, cause my enemy class is controled by vector calculation and nothing is being simulated.

the object on the other Hand has an initial Impulse and torque. objects do collide with objects and interact accordingly, but at that same Moment it does not print any message for overlap Events.

i would then start by creating a new class with a volume to overlap with everything possible, and test both your existing classes vs this volume. this way you will know which one has the problem.