For the longest time I have just waited for an open world Superman game. I started to learn Unreal Engine with the hopes to start learning more about game development and understanding the tool. My end goal would be to create a superhero type game. There are several super hero games that I have previously enjoyed such as the Arkham series, and Spiderman on PS4. I am also looking forward to Gotham Knights coming in 2022, however what I am really waiting for is WB to make an open world Superman video game. It is very possible to make a great open world Superman video game. However, game development companies are too worried that Superman’s abilities will make the game too boring or repetitive for players. I think the die hard Superman fans will go and buy the game regardless. They just want to experience being Superman, with a decent gameplay that does justice to how the hero is seen in movies and comics. Personally I think they should make a Superman video game following the story of Man of Steel; after the world has seen what Superman is capable of and his weakness to Kryptonite.
Some key bosses I would like in the first game include: Metallo, Bizzaro, Deathstroke, Firefly, Non, Parasite, Lex Luthor, which would be more based on Earth.
A sequel of this game can then lead to more powerful villains such as: Brainiac, Doomsday, Mongol, Darkseid etc… allowing Superman to travel outside of Earth and to other parts of Space.

Gameplay should include progressing through the main story line, with side quests such as rescue missions and/or missions related to crime. They can add elements of the Daily Planet reporting and investigation missions, as well as battling Lexcorp drone and bots that are programmed to take down Superman as the world and authorities think of him as a threat. Additional side missions such as helping Martha with chores around the farm in Smallville, or taking Lois out would also add a more human element to the game. Furthermore they can add racing challenges and include cameos of famous DC characters. The options are endless.

I would also incorporate Metahumans who can prove to be dangerous adversaries against Superman and would make the gameplay a little more interesting and challenging for Superman. The backstory can be that these meta humans got their abilities after the meteor shower when Kal El first arrived on Earth. Other powerful enemies can also have escaped out of the Phantom Zone when Superman defeats Zod. Finally more advanced technologies can be introduced that can prove to be a danger to Superman as well as the concept of weapons created by Kryptonite. All of these points will make the game more challenging. We can give Superman a health bar, he is powerful, but does have weaknesses

Finally the map needs be huge for obvious reasons. This is probably the biggest challenge for developers as Superman can practically go anywhere on Earth as well as outside of it, so limiting his mobility is something that will just not feel right… One of the largest world maps I have seen in open world games is in Just Cause 3. I would say 4 times larger than that can easily make locations such as Metropolis, Smallville, Central City, Gotham City, Nanda Parbat, Fortress of Solitude, and other locations such as plains, tropical islands, deserts, mountains etc… Finally flight mechanics and gameplay controls should allow the player to feel like they can do anything Superman can. Speed should be controlled with a boost concept that can help Superman accelerate at great speeds in practically seconds. Fighting controls should also include locking on to enemies and Superman should be able to control his attacks toggling Heavy attacks and light attacks. For example. Superman should not use heavy attacks when fighting criminals or enemies that are humans. If he does, then there should be consequences such as lowering in XP, or overall health of the City, which will have adverse effects on Superman’s reputation and or story line.

Bottom line, its difficult but not impossible. I hope to see something soon in the near future! If anyone is interested in creating a prototype game or already in the process of making a fan made Superman game, I would love to collaborate and bounce off ideas! 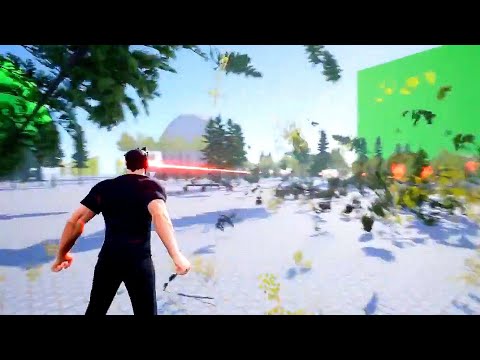 Theres Undefeated…But he missing the most important part, The Super Cape!

I say go for it. Its fun to develop super power game mechanics and play with them in the game too. Many games implement them in some form or fashion.

I was originally aiming for a Super Hero vs Giant Monster concept. But wanted to avoid any Intellectual Property issues. So as a fan of Mecha (hence my nick TechLord - a tabletop Mecha Combat game I designed as youngster) and Kaiju Media I use their inspirations.

Good Luck to You on your Game Dev Journey.