Good afternoon everyone. I am trying to create an open world but ran into a problem. There is a zone that I marked in blue in the screenshot. On the map in World Composition, it is also marked in the engine.

There are no problems inside this zone, but as soon as you go outside this zone, problems with displaying shadows begin. In the screenshot, I showed that the shadow, when the camera approaches, behind the blue zone, seems to be erased.

A character outside of the zone stops casting a shadow too. Also, if the character tries to run out of this zone, the character dies. I am interested in two questions.

The first. What is the name of this zone? It’s hard to google without knowing the name.

And the second question. Is it possible to somehow expand this zone to fix the problem?

It sounds like you’re running into problems with distance from the origin.

Two things to look at: 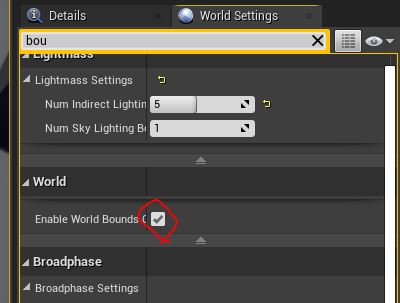