Basically whenever I switch between levels in my project it freezes and then takes about 5 minutes to open a new level. I’m using lightmaps and high res textures, but the levels are not too heavy. They are mostly about 1k meshes each (due to each thing broken down to different pieces for good shadow res). Still, it makes no sense… 5 minutes is way too long. We haven’t tried building the game yet, but does building it decrease the time it takes to open new levels? If not, how can we decrease it? Thanks!

Probably more info needed to answer your question. Machine specs, actual size of textures and lightmaps, meshes, etc. Opening level in editor does not reflect its loading speed in packaged game, but 5 minute time should be a warning sign.

It takes forever with me as well. Any project, even demo projects like Epic Zen Garden or SciFi Hallway can take 5 minutes or more to open. The Editor splash screen shows 94% for a loooooong time, and then it opens. Once it’s open I have no issues. It’s not laggy, the viewport is smooth and runs well.

I’m thinking that it’s doing some kind of online check that is maybe blocked by my firewall, and thus it has to time-out before continuing. Not sure where that would be though.

Size of textures and lightmaps - how to check that?
What about meshes? No idea how to check for those. I know an approximate since I’ve created all of them, but I can’t give an exact number.
The whole scene is probably about 750k - 1.25m tris, 6-7 4k textures, about 10 2k textures and all the rest is 1k or less.
If there’s any way to check exact numbers, please do let me know, I’ll provide you with that information.

So I’m just going to throw this up on here, do with the info what you like.

I recently built a new workstation (I do so every 2-5 years) and this time I wanted to future proof as much as I could, for as long as I could; for the first time ever I cared more about performance than budget.

Get one of those- all your “wait” problems go away.

Windows 7 Pro: starts up instantly and rdy to go (background services, startup apps, etc. all load so fast, to you it feels like Win started instantly from a cold boot)
DCC apps (Maya, ZBrush, Photoshop, etc.): start up in about 2 secs
UE4 (depending on the project): starts up/opens maps in anywhere from 2 secs to about ~30 secs for really heavy projects

You’re problem is hardware related, not UE4. Get a faster HDD and you’ll work more efficiently.

Well, I had a similar problem before. I had shaders compiling every time I open the level, along with asset discovery and stuff. The cause was UE4 not being able to write DDC.
Are you getting shader compiles every launch?

How could I check?

A mid-level PC will struggle to run Unreal, in particular the Editor. UE4 is a higher-end games engine after all.
Suggest you perform tests with a packaged-build on the target games platform, as soon as humanly possible.
Also UDK runs vastly better with a small sacrifice in graphics / usability, a lot depends on the target platform.

How could I check?

After you finish loading the level, properly save it, restart ue4 and open the same level again, do you see Compiling Shaders message? 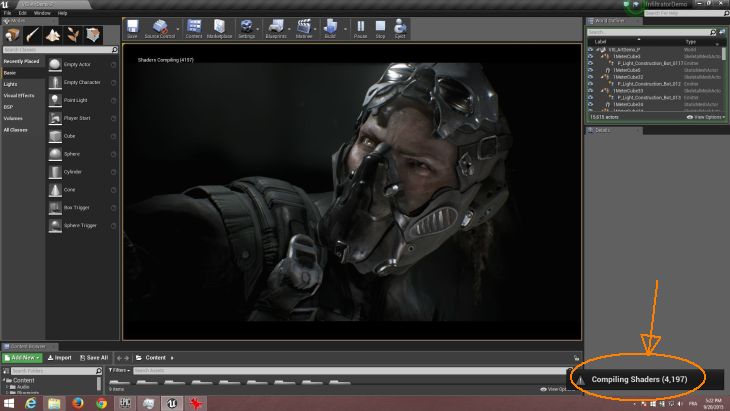 No, it’s not compiling shaders. It’s loading lightmaps and textures as far as I can tell, and that’s what takes 90% of the loading time. How can I improve the loading time though?

Would you kindly post a screenshot of your Light Build Statistics window for the level in question, along with specs of HDD, where your UE4 project is living ?
And try opening one of the levels from content examples. Effects cave or Sun Temple, for example. How are your load times looking for these?

A screenshot of light build statistics would be the window that appears after I build lights, right? If so, it’ll probably take about 8-10 hours. I’ll post screenshots tomorrow, but just let me know if that’s what you need exactly. Thanks!
It hasn’t always been like that though. It used to take about 10s at the beginning. Then, it got longer - 40-50s. Now it’s up to 5min. I’ll try opening an content example level tomorrow too.

What you’re saying makes no sense. End users will play a packaged build of your game; not the editor project you’re working on. Unless you’re releasing marketplace content and you don’t want other devs taking a long time to open your project?..

No, it’s not compiling shaders. It’s loading lightmaps and textures as far as I can tell, and that’s what takes 90% of the loading time. How can I improve the loading time though?

So what you’re saying is that the packaged game will not take so long to open the levels, correct? It’s only slow in the editor?

So what you’re saying is that the packaged game will not take so long to open the levels, correct? It’s only slow in the editor?

Yes, when you package your game for distribution, the cooker will make a compressed, smaller version of your project for people to play. As a dev, you have the editor with all your asset files, which of course are not packaged. A dev will always have a large source project to work on during production; that’s in general, nothing to do with Unreal 4- that’s how game development works.

Unfortunately, it’s hard for a dev to work efficiently if their workstation is slow, runs out of memory, etc. That’s why I suggested getting better hardware- for you to work easier and faster. Of course, this depends on your budget and goals.

Good luck with your game!

If that is indeed the case, then I don’t have a problem. It’s annoying to have to wait for 5 minutes each time, but if the end-result user won’t have to go through that, it’s fine. Thank you all for the replies!