Offset texture by half pixel

I need to offset a texture in a material by a half pixel so that it renders correctly for something I’m doing.
here is a good explanation of what I need Half-Pixel Offset in DirectX 11

Whats the easiest way to go about this?

Bump – I could also use this. should be a feature.

You can try this math, I know it will work with a Screen Size rendered image, but you might need some additional math to determine the correct texel size and do a comparison to the pixels per texel before the pixel math. 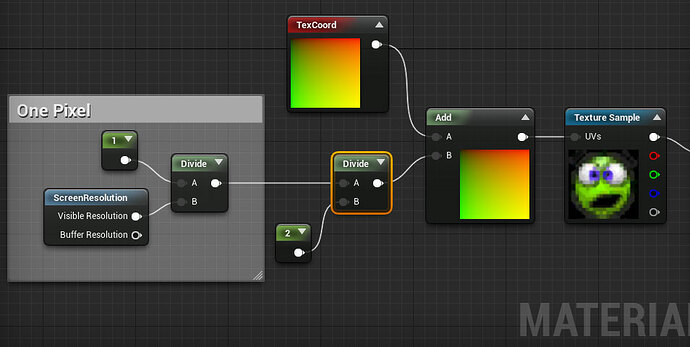 yeah, thats similar to what I ended up doing except I have to pass in the texture dimensions everywhere.

can you put in a request for a texture dimension node?
then it should be trivial to make a function out of it to do this.

much appreciated on the quick reply!

I want to try to get this feature request in for you correctly. The Texture dimension node you mention would be a Texture Coordinate as the engine sees all textures in relation to the 0 to 1 space. I think you want a node that will read the texel location in pixel space. Is that correct? Giving me an exact reference to how you want to use it can be helpful as well

sure, I can envision several ways I can go about obtaining my results. so possibly several requests for you to add. at the core of it, item 1 is at the heart of what makes things trivial in the material graph. hopefully they are trivial to implement as well. I think everyone will benefit from this greatly.

All in all, if we get all this, it will condense the math you did above to possibly a single node without the need to manually setup parameters from blueprints.
I’m looking forward to using such a simplified system.

Thank You for teh additional information. I have passed the information along to our engineers for further investigation and consideration. As soon as I hear anything I will report back to you here.