Here is a screenshot of my issue: 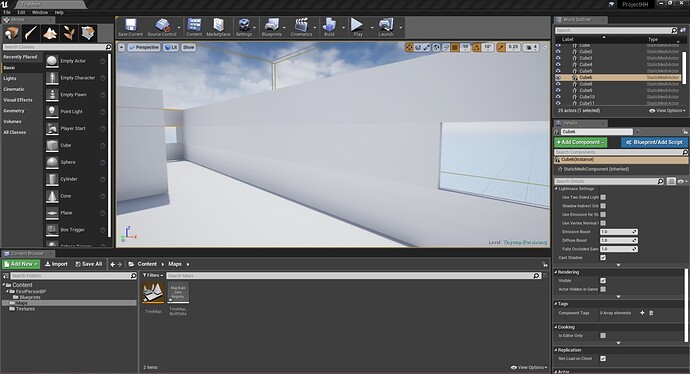 There is only one light in the scene, the wall in the screenshot is composed of 3 different cubes. All of the cubes and textures are the default from Unreal Engine, same thing with the lighting. All I’ve done is taken the fps starter thingy and changed the map.

I’m quite a beginner in Unreal so please include a little instruction sheet or something on anything you recommend, thank you!

Any 3d static object has to have a lightmap setup for it’s exact shape when it’s imported. The issue is that the cube is lightmaped as a cube, but you’ve stretched it out causing the shadow’s inaccuracy. Static objects basically have the shadows painted onto them when you build lighting, like a texture map… which looks bad if the shape has been warped.

If you recreated the wall in 3d software and imported it with a custom lightmap, you wouldn’t see an issue (I haven’t messed with auto lightmap generation… I might look into it later). Although the wall would need a larger lightmap size, specified under the object’s details when double clicked on. The default cube is 64, a wall like that might need 128 or 256 depending on complexity. Really big stuff needs to be broken down into smaller assets to keep the lightmap sizes down or you’ll have memory problems. Max size is 2048, though I try to avoid having any object that large. I have a small, low poly cave broken down into 4 pieces, for instance.

You may run into the problem of static shadows not lining up with dynamic light sources. If you have wavey lines on the ground, you either need a larger lightmap size or need to break the asset down into smaller pieces. I’ve got a temple that i’m going to seperate all the floors out of later to reduce the lightmaps down further. I’ve also had the issue where my character was getting really dark but the environment wasn’t as dark. Turned out that Static Lighting Level Scale under World settings needed to be halved to get the kind of accuracy I needed and fortunately my level sizes are quite small.

Anyway. It’s an unintuitive ordeal but once you get it sorted out, building levels can be pretty cool. For troubleshooting, watch out for using the wrong lightmap channel on imported objects, remap the lightmap after any adjustment, watch out for the lightmap size being too big and breaking things down smaller, tinker with the light settings and world lightmass settings and good luck!

could it be that I still have one side that isn’t even with the others? (They are walls so I didn’t want them to extend a lot, so I only have X and Z equal to eachother while the Y isn’t)

I just setup a temp project and replicated your results. I tried importing a custom cube I made and got shadow errors on it as well.

If you make your walls one object in an external 3d program, lightmap it correctly and drop it in, any weird shadow thing is going to be in the corners where it would be least noticable.

Sorry I couldn’t be more helpful :^\

It’s okay, thank you! I am trying to avoid making it in another program as it’s much easier for me to make slight changes when it’s all multiple pieces

I found a fix for the issue I was having thanks to @Makigirl 's comment on another post.

Unreal when builds lighting it calculates lighting per object this is why you get with these settings shading differences! SLLS: 0.1 - 0.15 ILS: 0.6 and you’ll get rid of those!!

…I would turn off lightmap compression (and AO too till you don’t get your lighting right). Also 100 bounces are pointless: above 10 it’s just random and can produce false results… just keep it between 5-10!"