Link to a download of your game
Team name
List of team members
Name of your submission (Please format it with your team’s name attached ex. TeamName_GameName)

Game Description:
You and your pregnant wife are sick with the blood blight. In desperation you call upon a demon to strike a deal with in order to save your wife and unborn son from a terrible death. Unfortunately, deals come at a price. The price is souls of the innocents and you must begin collection them immediately.

How to Play:
Press Space to spread your sickness.

Here is my super short 3 level game. Hope it brings you a couple mins of joy lol

Game made for 2015 November #UE4JAM. Contribute to Arktiks/DoctorSimulator development by creating an account on GitHub.

Name of your submission
Doctor Simulator

Game Info:
You are on a mission to root out the evil satanic disease that is witchcraft. The only cure - death.

Extra Info:
I couldn’t resist making a little tribute to one of my all time favourite actors and loosely base the game on the same theme as the movie “Witchfinder General”. This time I made absolutely everything myself. 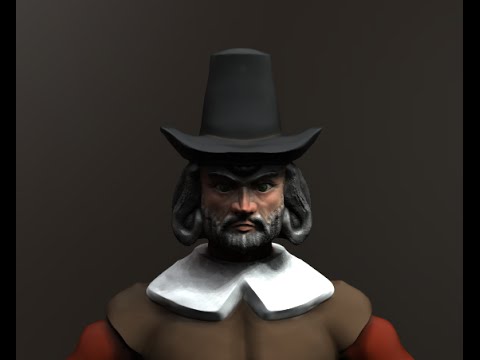 Game Description:
The player is stuck in a giant posoinous hamster wheel, where he need to avoid the spikes.
Everything in the game is driver by the Music and the beat.
All original assets (unless you count the UE4 mannequin)

P.S. you should really put a warning on your Audio visualization Plugin, this plugin does not package, and I had to figure out a small hack in order to make it work.
WARNING: if you want to livestream the game, the game contains copyrighted music.

Controls:
W/Space to jump
A/D Move Right or left, the player will try to counter spin the hamster wheel. 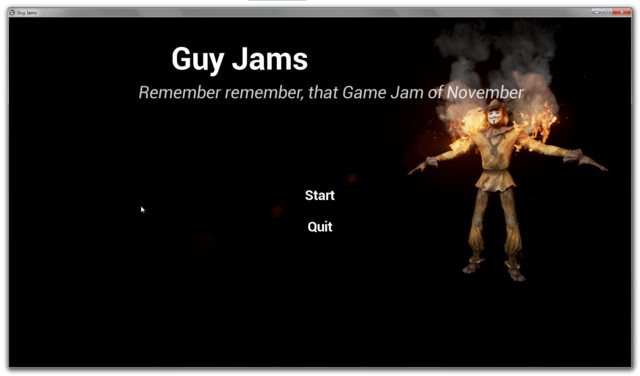 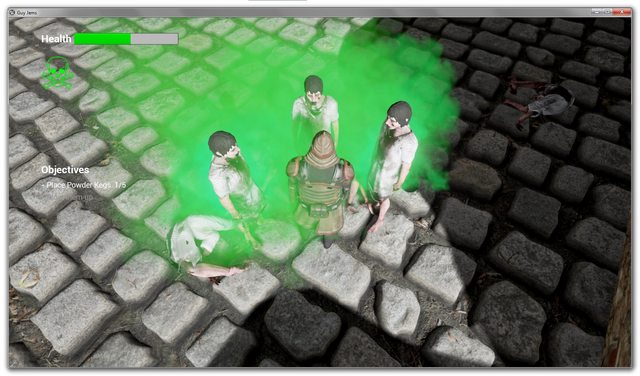 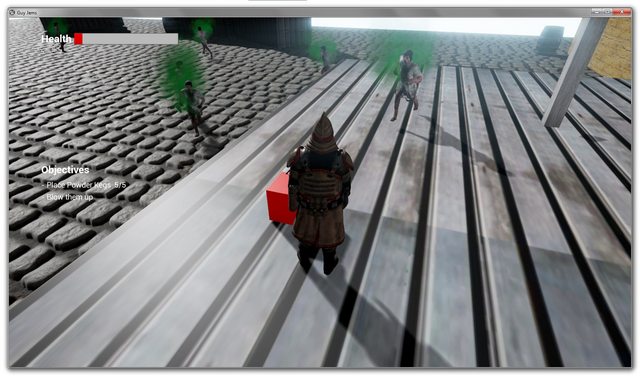 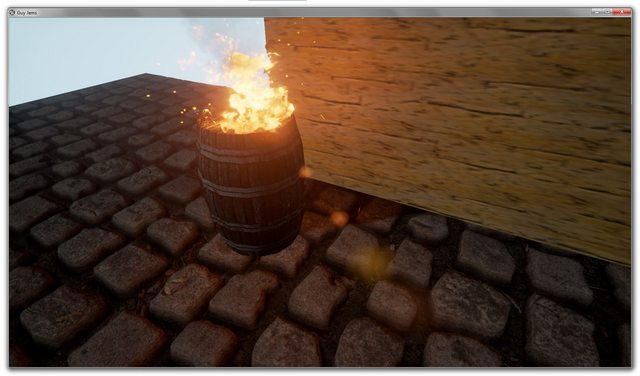 Name of your submission
Guy Jams

Description
Dr. Guy had a bad day, and now the Gallows are being overrun by Zombies. What can we do but knock them down one by one? Blow em up!

Controls
WASD for Movement
Space to Jump
Left Mouse Button to interact with Powder Kegs/Fuse, Hold to swing and attack

How to Play
Smack the Zombies, or blow them up. The latter is the only way to win. Place 5 Powder Kegs in the indicated places, then blow them up using the Fuse at the Gallows to enjoy an attempt of me authoring a Matinee.
But beware, staying close to Zombies for too long slowly poisons you.

Name of your submission (Please format it with your team’s name attached ex. TeamName_GameName)
TeamMat_KitchenCleaner

Info
You are a chef trying to keep the disease in your kitchen from getting to your meat. Click on the floating disease to wipe it out. If you meat has been infected, purge it with devil fire, give it an acid bath or send it to space in a rocket to have the disease removed. Just drag the meat to any of these cleansing objects to have the meat-disease destroyed. The disease will start to move faster the longer you last, so be careful. 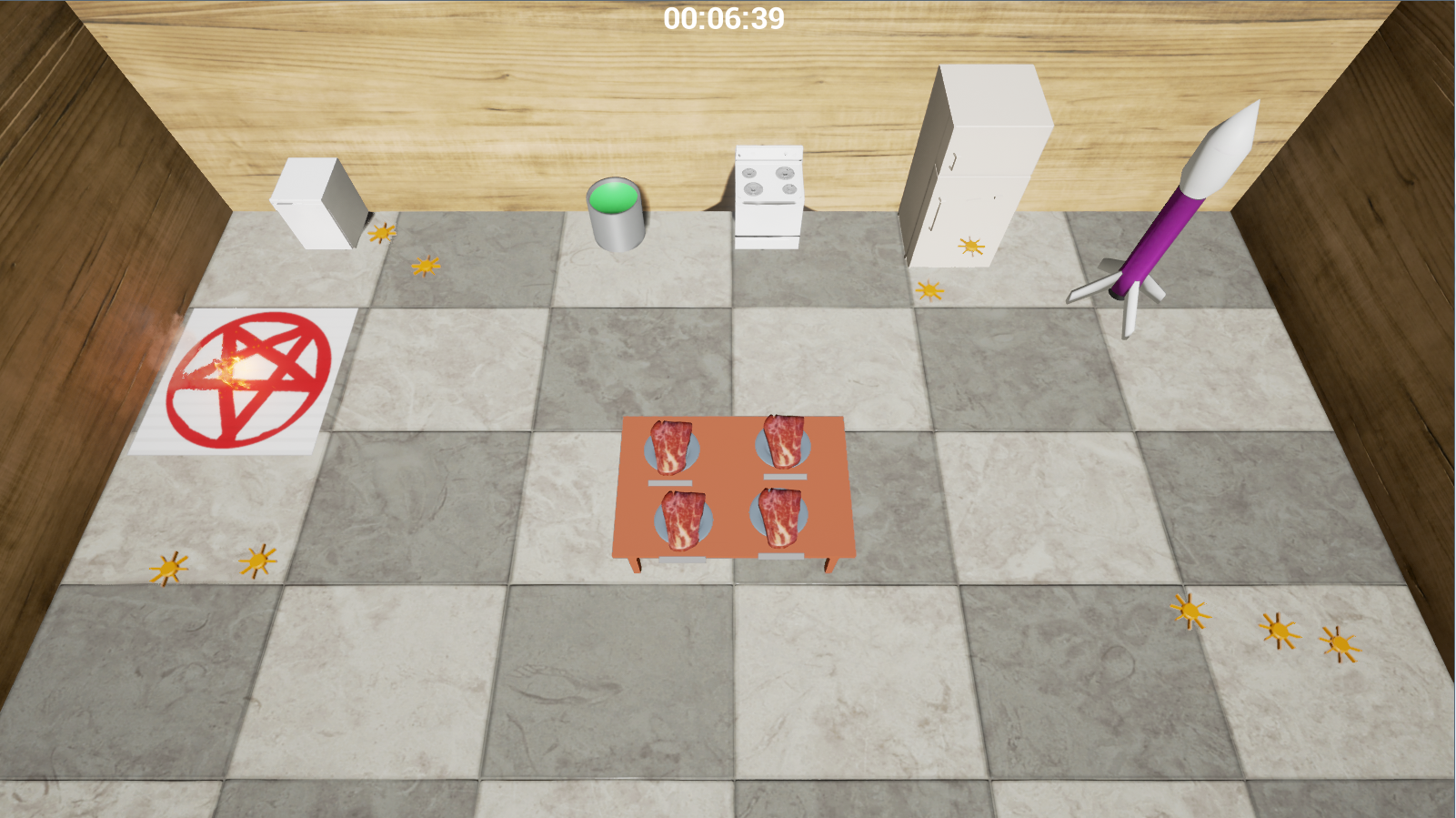 Game Description:
Viruses have invaded your body. Time to do the only thing that makes sense: grab your laser gun and go hunting.

The project source contains a variety of features and coding concepts using practical examples including AI and multiplayer support. There is no step-by-step guide, instead the documentation aids in walking you through the available code. Download...

Another really good idea for a jam, this i could have used more time with; but who couldn’t have? Looking forward to the awesome! 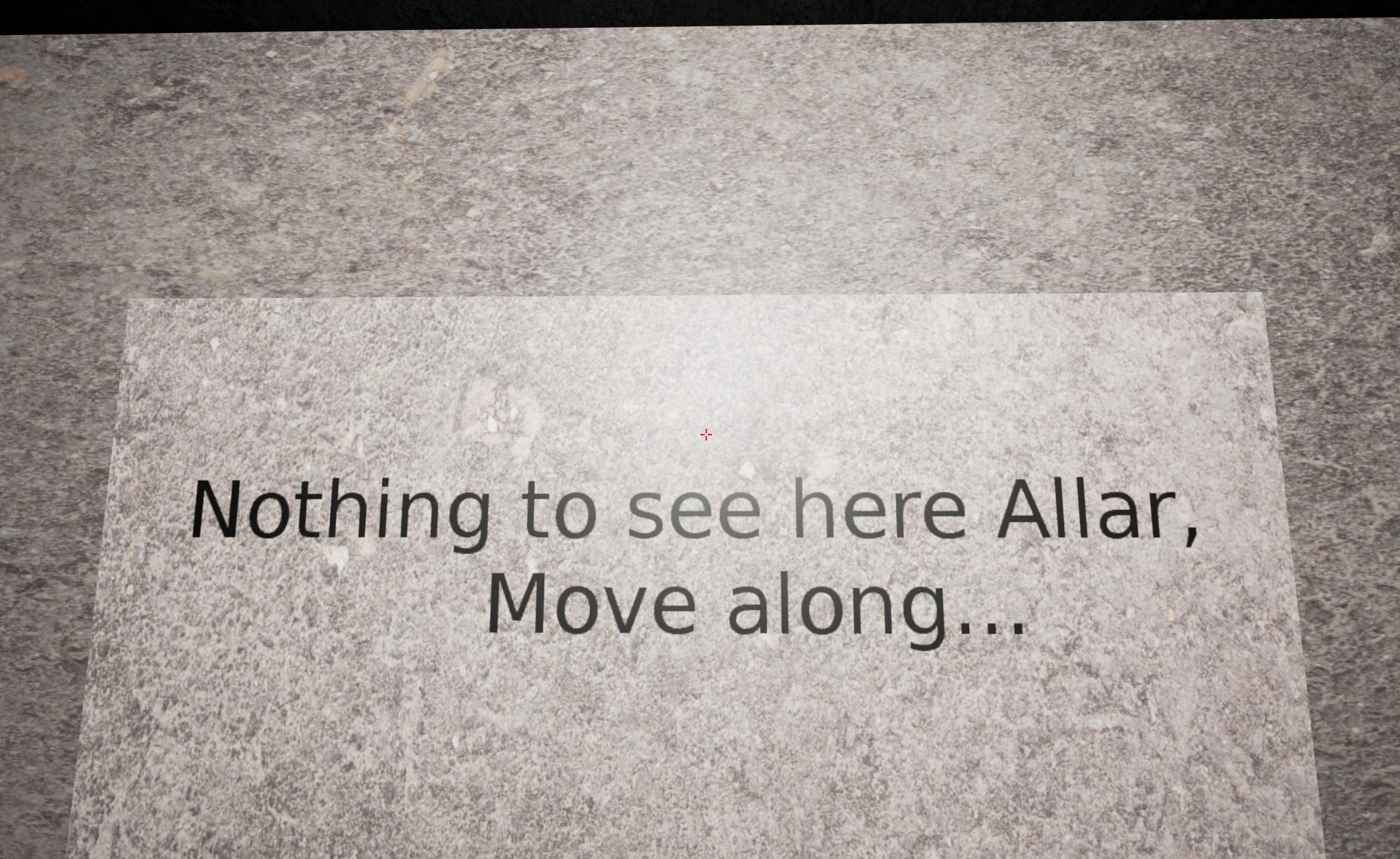 **Description: ** The zombies have come, and in order to save your family, you need to collect special medical packs. Collect all of them and make it through six levels and your family is safe.

Controls: W, S, A, D (to move), Mouse to spin, Left Click to fire, R to reload, and ESC in game to pause/return to Main Menu.

Description:
You are a doctor and it is your job is to save some patients from the feared “The head shrinking disease”.

Description
Centers For Disease Destruction is a administration sim that takes a serious look at global capitalism as it affects healthcare.

Description:
Collect the viral bodies and convert them to anti-virus by the end of the path!

Ultimately, this was an exercise in trying to learn and work at the same time, with the final goal being: complete the project and turn it in. I would love to greatly improve the project (as there is MUCH to improve), but this one has met it’s goal. I greatly enjoyed my time on it, as well as participating in this this jam!

Game information:
Your lab accident causes three nasty diseases to spread throughout the streets. Escape the contamination and “save” strangers along the way using dubious medicine.
Remember to save the best dose for yourself. You’re going to need it.

The diseases will make you:

Name of your submission
Baguetteam_WhoMustDie

Description
you are replacing a doctor, charged with finding who, among the three patients, is one that is contaminated. To do this, you can use a whole range of experiments to be performed on the sick. You can also ask the guard to do the dirty work for you. You must choose just one patient to kill or … Maybe this job is too hard for you and you will take the last option… not to choose …

Description
You are a nanite, a tiny machine racing through the veins of a patient to eliminate a virus infection. Due to hacked nanites being used in recent assassinations you will be deactivated immediately if you go rogue and attack the patient’s own cells.

Controls
Mouse to pilot the nanite.
Escape to exit to desktop. 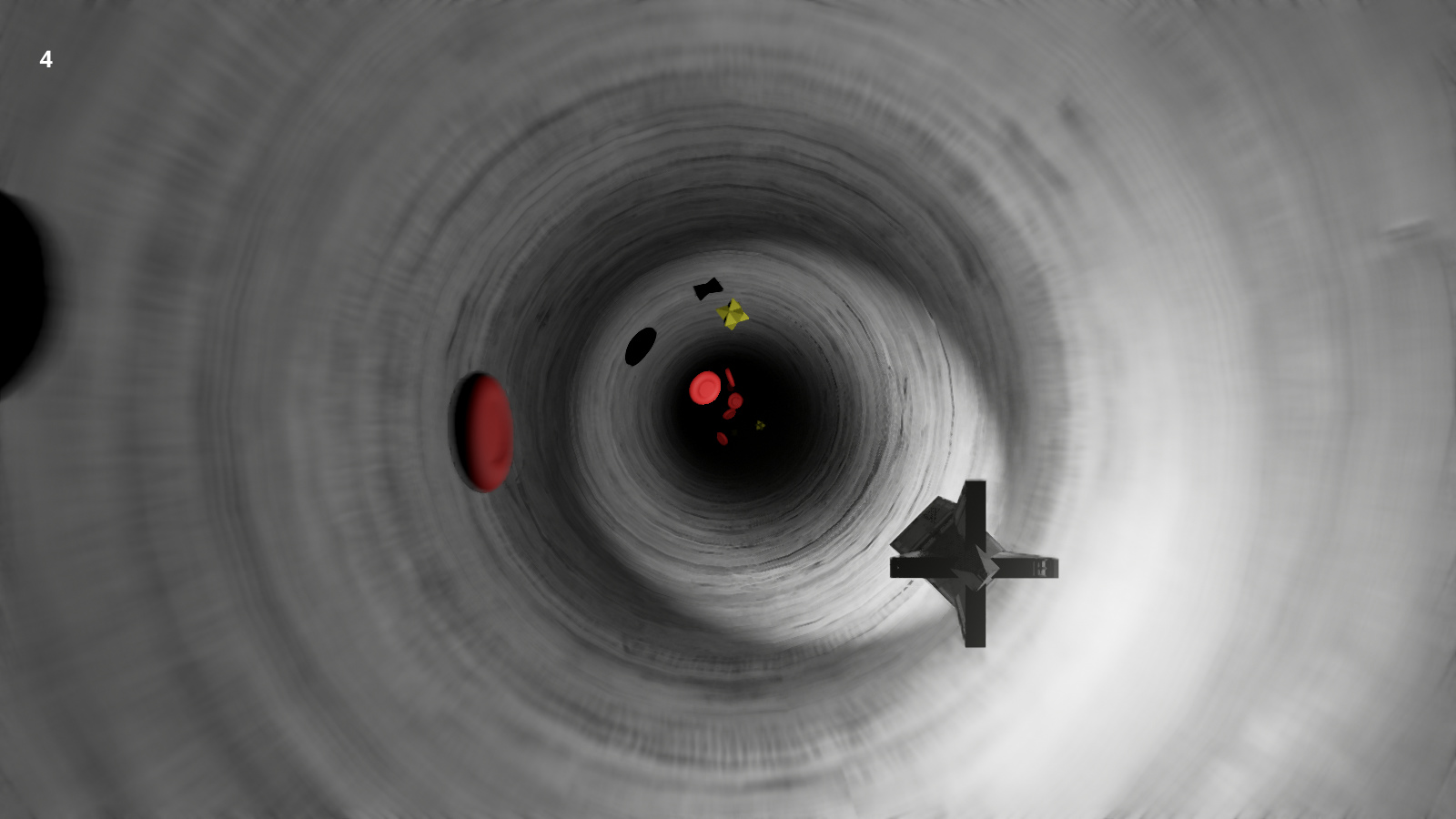 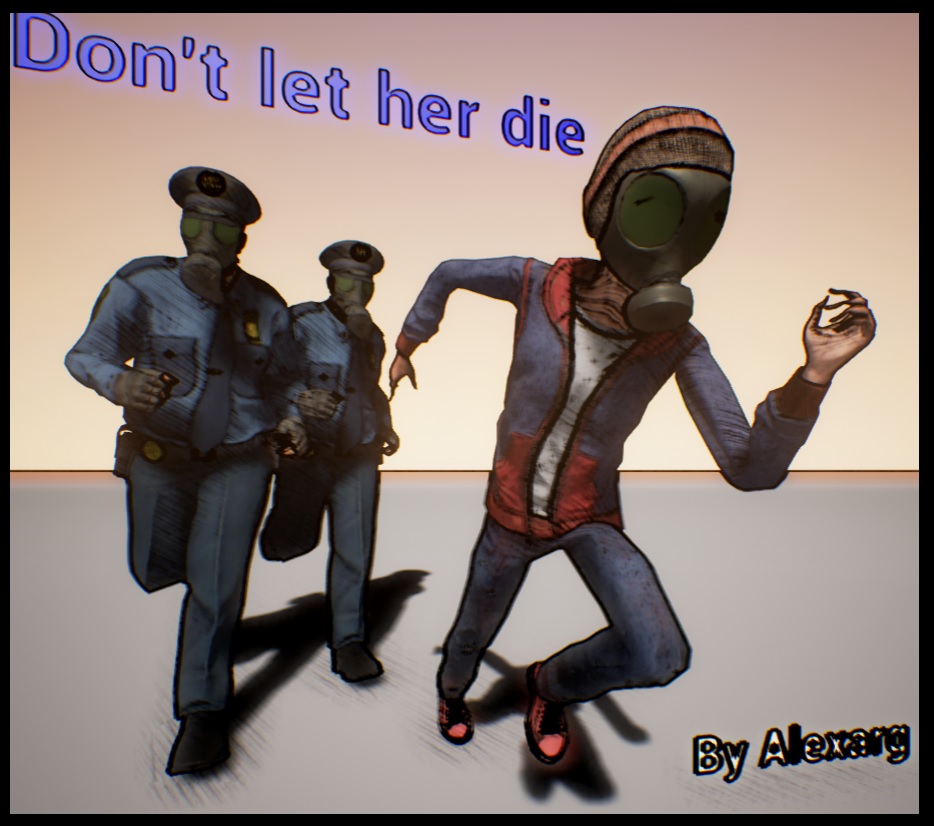 Description
In a toxic world not far in time, where things like food or medicine are commodities that not anyone can enjoy, sometimes a boy must be outside the law to help the less fortunate.
Help the boy to find and bring to his sister, Tiffany, her medicines.

How Play:
Try to find your sister and deliver the medicine to her before she dies, while taking care that the police don’t caught you with the stolen medicine in your hands (they let you go if you don’t have it with you).

**Notes: **
Minor bug: if you get out of time or get catched, try to click on the button, otherwise the mouse pointer can disappear.
Sorry if you see spelling errors (non English speaker) and I had to hurry to finish this =)

Good look to everyone! 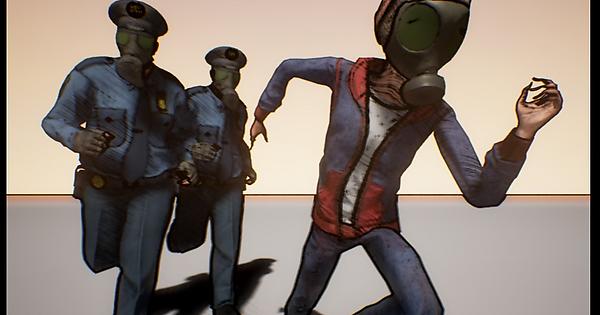 Boy it has been a wild ride! As with each gamejam when I am figuring out what my game is going to be about, I also factor in that at least one major element of the coding is something I have little experience in. For example, last month I made my first paper2D game. For this month I decided that for my submission I would take a foray into the wild world of procedural generation. There are so many different methods and so I just ignored all of the internet’s prior wisdom and experience from tutorials and examples and made mine from scratch. It’s probably not the most efficient, but I got it working pretty smoothly by Saturday. I also have relatively little experience with AI, so creating enemies that would roam, attack, etc was a treat!

I hope you all enjoy playing my game!

Description:
The year is 2115 and the world has become gripped with war. The internet, which was once seen to be the way to global peace through accumulation of knowledge and communication has become so over saturated with information and entertainment that vast portions of the population have become stupefied and violently irrational. In an attempt to combat widespread ignorance of history and brainwash its citizens into seeking peace, the British government has created mandatory historical -simulation therapy. In order to receive their certificate of completion, citizens must complete rigorous simulations of British and world history going back to its foundation. You have arrived for another day of simulations.

Traverse through the dungeon levels setting fuses on your barrels of gunpowder. Set all 6 fuses and escape before they blow and you will succeed!

Some historical background for you: The Gunpowder Plot of 1605, was a failed assassination attempt against King James I of England and VI of Scotland by a group of provincial English Catholics led by Robert Catesby. The plan was to blow up the House of Lords during the State Opening of England’s Parliament on 5 November 1605, as the prelude to a popular revolt in the Midlands during which James’s nine-year-old daughter, Princess Elizabeth, was to be installed as the Catholic head of state. During a search of the House of Lords at about midnight on 4 November 1605, Fawkes was discovered guarding 36 barrels of gunpowder—enough to reduce the House of Lords to rubble—and arrested. At their trial on 27 January 1606, eight of the survivors, including Fawkes, were convicted and sentenced to be hanged, drawn and quartered.

Download Link:
Download Link
[6:38am] EDIT: The default .exe link is broken. Please navigate to GunpowderPlot/Binaries/Win64/GunpowderPlot.exe to play.
[Nov. 19] EDIT: After the jam I fixed a few common bugs that people pointed out to me after playing. You can download the (hopefully) bug free version here. Patch notes are included in the .zip file.

Notes
Once in a blue moon a level will spawn with no connection to the exit or objective. I’m truly sorry, there is a bug in my procedural system somewhere that is creating that. If it happens press “K” to regenerate the level.

Pictures:
Here are some pictures to give you an idea of some progress and features. I’m will most likely make a video later that demonstrates the dungeon generation system I made, but for now, see the imjur album I made below:
Gunpowder Plot procedural generation album