Niagara: transition from beam to ribbon?

I know this can’t be done in Cascade but I’m not familiar enough with Niagara’s craziness to figure out if it’s possible.

What I want to do is spawn a series of particles in a beam formation, and then have the tail end of the beam blend into a ribbon. I’m creating a thruster effect which is a bit like an acetylene torch 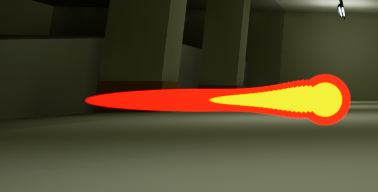 I can’t just use a ribbon (with particles being sent in that direction using velocity) because it needs to be “rigid” in its orientation along the main part of its body. As it turns or moves in game, I need the main part of the “torch flame” to have a static shape and size; I don’t want it to create smooth ribbons all the way up to the base of the torch, which is what a true ribbon emitter does. What I DO want is for the all-red tail of the flame to behave as a ribbon, leaving behind a world-space trail of particles that fade out with time. So it starts as a rigid locally-consistent beam, and that beam is “smeared” into a world-space trail over its length.

Currently, I’m using two emitters for this; the first is the beam, the second is the tail. This works okay, but the issue is when the emitter rotates too quickly, you can see the disconnect between the beam particles and the tail particles, because they have to overlap. What would be ideal is for the particles which “stream out” to always be appended to the ribbon trail sequence of the beam itself and get caught in the same ribbon renderer, but I can’t figure out how to do this. The Beam Update module always forces ANY existing particles in the beam to conform to the defined beam curve, there doesn’t seem to be a way to apply the beam curve to, say, the first 200 particles, and then spawn new particles after these which are always appended to the back of the chain.