First of all, I am very new at Unreal and blueprints. I have a background at coding though.

I am trying to spawn a Niagara system at location depending on what key I hit on a MIDI device.

I managed to do something so far.

When the system spawns, I set the spawn rate of the emitter with an user parameter. So when it spawns, the emission start at 0 but right away it starts to emit 300 particles.

I also have a custom event that should set the spawn rate to 0 again when the key on the MIDI device is OFF. But that’s where it gets tricky for me. I managed to kind of make it work. But it works as long as I don’t hit one key then another one and then release the first one.

it works one at a time basically. So I was hopping to find a way to add an ID to the system when it’s spawned so I can later select it again to set the spawn rate to 0 when the key is released. I guess it’s possible? or maybe I should approach this differently?

Hope that makes sense. I attached to this post a screenshot of my blueprint to better understand maybe. (the NiagaraID nodes are just an attempt to create an ID but I actually don’t know how to use it) 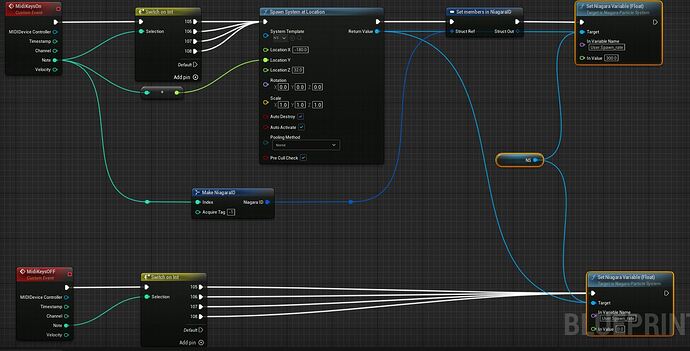