EDIT: Looks like it works in the 4.22 but “Collision Query” now is deprecated. 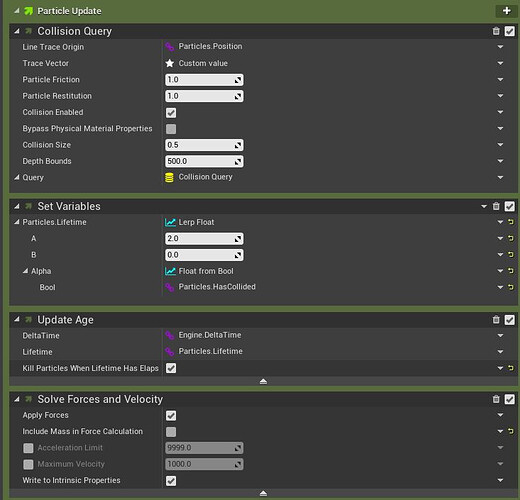 SSSSS.JPG734×705 57.4 KB
I have done this to kill particles when they collide. But there is something weird.

Is this a bug? At first I thought I was doing something wrong (and probably I am), but then, why inside the blueprint viewport are being killed?
Is there anyway to solve this?

how did you get the Particle.hasCollided ?

You can use Expression -> New Expression and then a ternary operator to select between two values.

You can use Expression -> New Expression and then a ternary operator to select between two values.

Exactly same result. It only works inside the viewport of a blueprint. But it doesn’t work in the level viewport or ingame. (With “works” I mean that particles are killed when collide)

Edit: Now I am testing it using the 4.22.1 version, collision query now works as inteded and kills my particle but it is deprecated so now I have to deal with the new and more complex collision system and again my particles are not diying… >.<

It works fine in 4.22.3 with the Collision module