This hallway scene inspired by a Deus Ex concept is available now to all active UE4 subscribers on Marketplace. I’m posting this on behalf of Wiktor Öhman. This is a great example of the sort of content that can be created with Unreal Engine 4 and Wiktor did an amazing job with it!

I’ve been an avid UDK and Quixel tool user for a long time, and during these years I’ve established a pretty decent workflow which allows me to quickly try out ideas and iterate on them without much trouble.

When I got access to Unreal Engine 4 and was about to start on this new project I had a clear plan in my head: I wanted to see how well my legacy DDO → UDK workflow would translate to the new Quixel SUITE → UE4. Turns out, it translated incredibly well.

I chose to base my environment on the Deus Ex concept for two reasons. First, it’s Deus Ex, which I love, and secondly, it has a lot of clean and metallic surfaces which could prove to be a difficult thing both to texture and to make visually interesting.

During the first couple of days with UE4 I mainly watched the video tutorial seriesand read through the documentation, which really got me up to speed quickly. Everything felt very streamlined and easy to understand.

I modeled one of the tiles and baked out a tangent space normal, AO, object space normal, gradient map and a color map. Then I proceeded to add details to the normal and AO that would’ve taken unnecessary time to model by instead using the new NDO, a tool in the Quixel SUITE for sculpting and designing normal maps inside Photoshop.

Next came the really interesting part – the texturing. One of the things that had me both worried and excited about UE4 was the new shading system. I still hadn’t made an entire scene with PBR, and I wasn’t entirely sure how UE4 would work with my textures. I went ahead and textured the tile quickly using DDO, which took me about half an hour, and then imported it into UE4.

I started by creating a master material which was pretty basic. It did its job and looked really good straight out of the box, which was a huge relief, seeing as my workflow was pretty much intact. I did, however, want to make a couple of changes to the workflow and the master material to allow me to quickly adjust the reflectance values in-engine.

What I wanted was the ability to quickly make fine adjustments to the reflectance values and the colors based on a mask. I created a mask with two values in each channel (RGB) and the AO in the Alpha. The two values were 50% grey and 100% white. I then separated these values in the material editor and used them to mask out areas of my base color, specular, metallic and roughness maps.

Now that I had 6 different “material groups” I could quickly adjust the values, and it allowed me to have several different real-time editable material types in a single material, such as plastics, glass, and metal and so on.

At this point I was pretty happy with my master material, but when looking closer at my asset I realized I needed some micro detail when doing close-up shots. The first thing that came to mind was to add a detail normal, but I quickly decided against that, because I’ve never really been a fan of the results you get with that. Instead, I went through the Megascans material library that comes bundled with DDO and took one of the roughness maps associated with one of said materials; I then coupled the roughness map with the unique roughness map created for the asset.

I didn’t know what to expect, seeing as I’d never tried this before, but when I saved the material and previewed it, it looked really good, so I decided to go with this approach.

I ended up using two different Megascans roughness masks (or scuff maps, if you prefer) for the scene: one brushed steel and one scratched aluminum, which I switched between depending on the target surface. These scans were also used for the unique texturing with DDO, and helped me create believable clean surfaces easily.

All in all, this was an extremely pleasant experience without any frustrating moments, and I was really happy to see such a good compatibility between the Quixel SUITE and Unreal Engine 4.

Texturing the entire scene took less than 5 hours all in all. It was easy to organize the scene, and light it, and the new material editor feels really, really good. Everything was put together in 4 weeks (including the time it took to create all assets from scratch), and for me this goes to show how getting into UE4 and Quixel SUITE is incredibly fast and how much these tools contribute toward the marriage between quality and efficiency.

As a side note, I got the chance to try out the Blueprint system a bit when animating the fan, and I was pleasantly surprised to see how much easier it is to work with than Kismet. I will definitely be trying to make more complex stuff using the new visual scripting system.

UE4 is a huge step up in all areas, I would say. The fan is flying

Besides that, thanks for the indepth info in this thread!
Really nice to read your thoughts and experiences with the engine.

Really nice… but uhm…
The fan is flying

The fan is flying

This is Next Gen, Luos. Make some fan particle effects, and roll with it.

Wonderful work btw Disting, You mentioned about Micro-Detail, usually done with normals but this time you used roughness?
Was that because the roughness values hold so much information rather than just the lighting changes you get with a normal?

With the use of a Master Material also, is it much more advantageous FPS/Performance wise than separate masters? or is it just something You prefer to do cause your used to it?

I can understand that the less materials you have per project the more you will save, so making Instances off of one material would be amazing; But, just curious to know,
If you found it limiting in anyway, or difficult especially with compile times with complex materials?

I find with the project im on now, with separate materials all with their own instances, that we have VERY high compile times, even on basic materials unrelated to anything else, I think the sheer volume of materials causes this though, I can’t imagine what else, as they are no where near as complex as you Master Material…

Do you also have any references or tutorials on how to go about building a Master Material like yours?

Its very interesting and very complex, I’m still trying to understand What each parameter does, and Why it exists…

This is Next Gen, Luos. Make some fan particle effects, and roll with it.

there, I fixed it by making the fan a particle with orbit:

(sorry, im getting rather bored by waiting for my particle tutorials to upload.
But, sorry for hijacking thread.

I am honestly amazed by all the work done for this hallway.

Do you need to have the 4.1 update in order for this to work?

Do you need to have the 4.1 update in order for this to work?

Yes. The content was saved with the 4.1 version of the engine.

I noticed a little bug with the reflection actors. They are all set to .15 scale and only one of them is really affecting the scene. This is giving some wonky reflections as the actual influence is MASSIVELY bigger than the scene suggests (3000.0)

Setting the scale of each of them to 1.0(Doesn’t affect the render, just the drawn influence radius) and the radius to 450 fixes it and provides much more accurate reflection in the scene (However, you’d have to be “looking for it” for it to be an issue, I think)

Again, amazing work. After dealing with Vray for a week, the PBR shader is SO MUCH BETTER! Dat floor scratchyness! 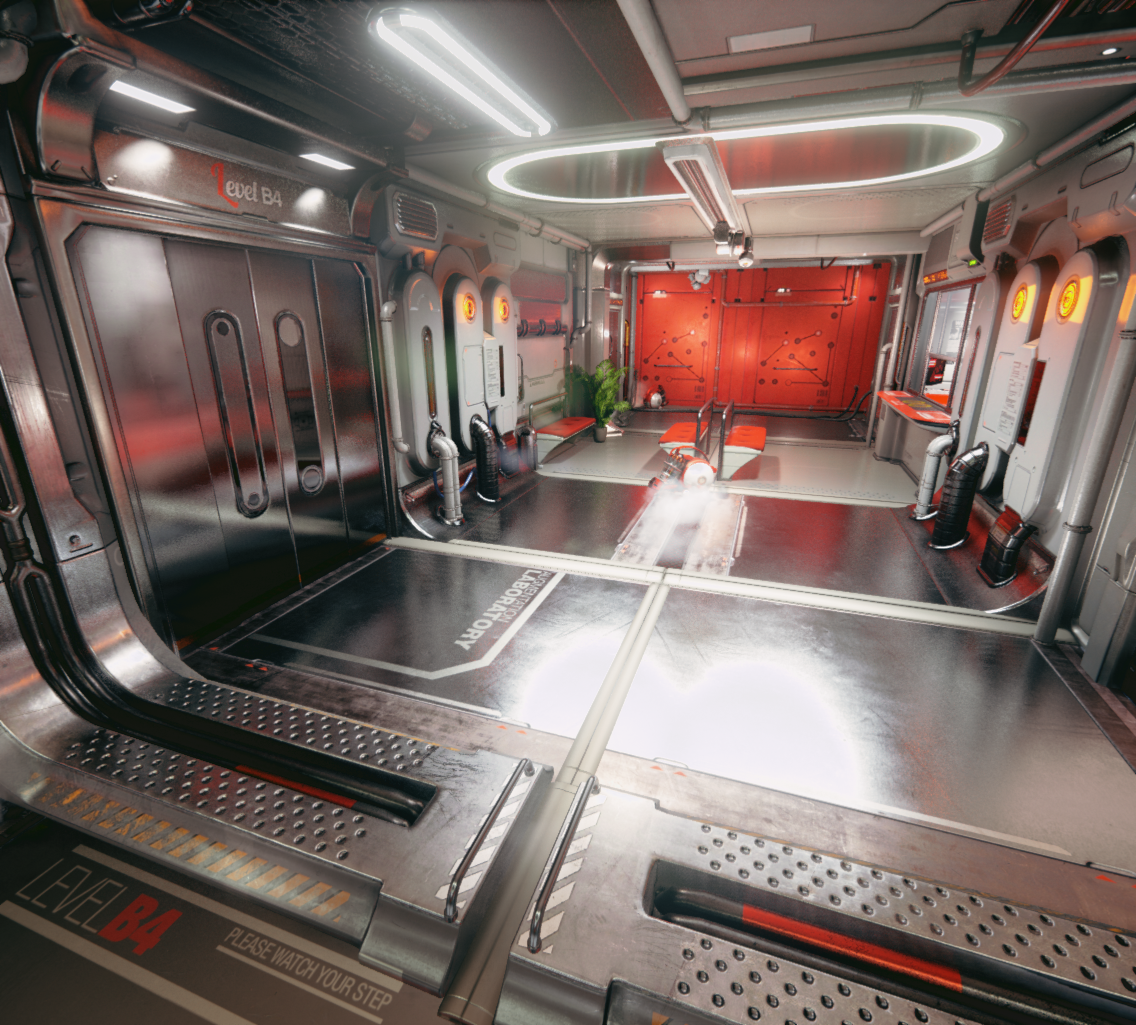 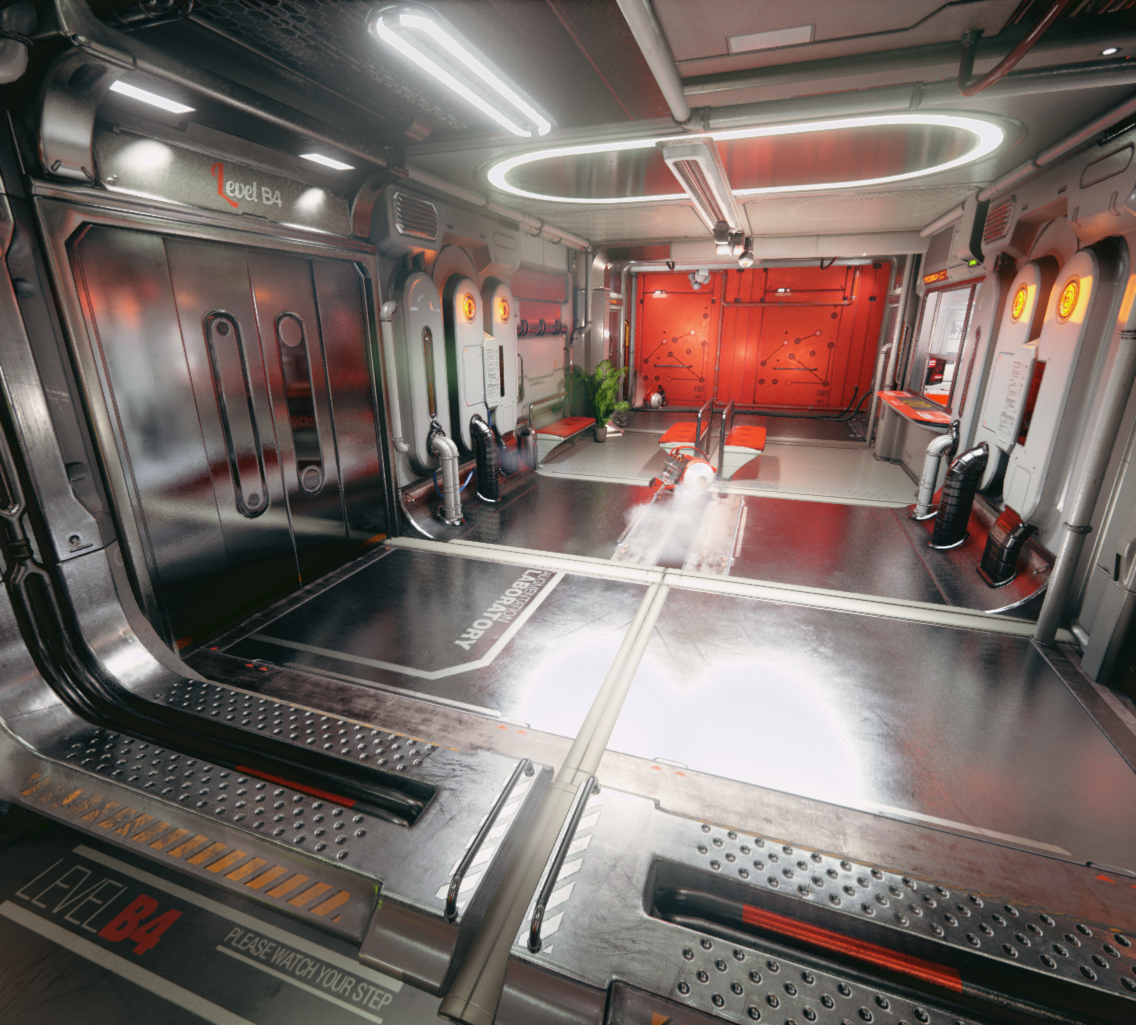 Like I said, not a HUGE difference, and something you’d have to be looking for.

Nice, I saw this the other day on Polycount. Is this similar to other content on the marketplace where you can use materials/textures in commercial projects? Or is this one different?

I thought it would be many more years before we could play a game that looked like this, honestly.

Nice, I saw this the other day on Polycount. Is this similar to other content on the marketplace where you can use materials/textures in commercial projects? Or is this one different?

Clearly a feature and not a bug.

You may have to close and reopen the launcher after updating.

As you guys are in the closed beta for quixel suite, can you give a more precise ETA than “within a month or two”?

Ditto for being unable to download this, i get the subscribe to download button.
I got it by launching the engine, closing the launcher…then selecting marketplace from the engine launch window