Hi,
I saw there was an update to the Lyra Starter Game on the launcher today, but there’s no information about what changes have been made.

Any chance you could start doing release notes for Lyra?

I think, you can guess only same as how Lyra features works. But good question

Good question, I would also like to know what is changed.

I’ll chime my vote in on this as well. Please post change notes when updating the Lyra starter game.

Noticed that when I got around to reading the UE5 5.0.2 update notes there was a lot of Lyra project updates and bug fixes mixed in with it. Seems like, for now anyway, that Epic is pushing Lyra update notes in with the engine update notes. 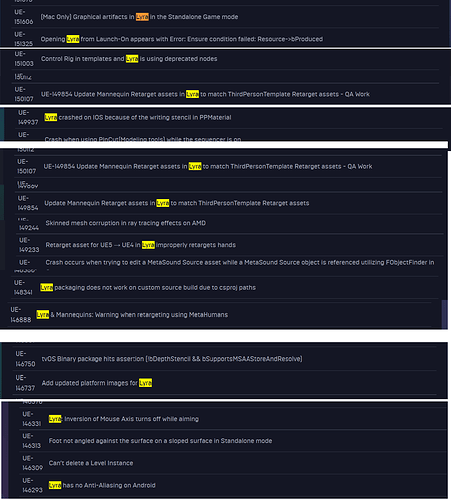 Yes very annoying, EPIC PLEASE upload the project to github immediately, Some of us are actually using it!!!

Please and thank you.

Looks like there’s another new Lyra update today – but no patch notes, so I have no idea what updates I should be looking for to pull into my custom project.

If Lyra is going to be advertised as something that is intended to be a “starter project” that you’re supposed to build on top of, it really needs better support in the area of giving people the option to help find what they should be updating in their own projects, that were built on top of older versions of Lyra.

did you just copy over the updated files to your project?

Principally, I try to avoid changing any Lyra files, and build my own custom logic as additional plugins. Then I can just create a new lyra project and copy my content over it.

Designing that in a modular way is a bit of a pain though, if you want to use any lyra content that’s in the main content folder and not already in a plugin

After spending multiple hours downloading and recreating successive CitySample and Lyra projects, I decided to make a python script to generate a sha256 hash of every file in the project and compare them between the two folders.

Turns out that the only file that changed, in both of the last two updates, was Config\DefaultGame.ini

The epic launcher’s patcher should probably be a bit more intelligent, to not require users to download and regenerate 100GB of tens of thousands of files, to update a line in an .ini file.

UE 5.0.3 came out this week, so I decided to update my Lyra project and see what’s changed.

Looks like the only change between 6/21 and 7/14 is still the ProjectId in Config\DefaultGame.ini

So far it has been 4 days since 5.0.3 dropped, and still there has been no actual update to Lyra in spite of what the release notes say.

@Amanda.Schade @SkyeEden there are at least 2 bug fixes related to LyraStarterGame listed in the 5.0.3 release notes you posted. However after updating to 5.0.3 I see that LyraStarterGame content has in fact not changed at all. Creating a new Lyra project yields exactly the same result as in 5.0.2. No updates have been released for it. Is there a subsequent Lyra update that has not yet been pushed out? If not, perhaps the release notes are wrong? Please and thank you for any insight you ca…

While the release notes mention Lyra issues they may have been issues in the engine that caused them, with the patching being applied to the engine.
Just a theory though.
(Great website and YT channel by the way https://x157.github.io/)

It’s true, if they were underlying engine bug fixes that were classified as Lyra problems, it’s possible they were fixed and released in spite of no Lyra code updates being made available.

Given the complete lack of response from Epic in the past 2 weeks, let’s hope that is the case.

Upgrading the Lyra Starter Game to the Latest Engine Release

Documents the major changes to Lyra for each engine version and includes information that help you upgrade existing games to take advantage of the newest release of Unreal Engine 5.