Wear the Gear VR and head straight into the action with its new controller. And with the ergonomic design, it's easy to go on longer adventures.

Sounds like a pretty good new iteration to me

Now we just need for Epic to coordinate with Oculus and add timely support for new features for 4.13 :rolleyes: :o

What made you think Samsung / Oculus were abandoning Gear VR ?

Google Daydream seems to be a vaporware. I bet Samsung won’t let for of Gear VR for years to come until Daydream is proven to be better and more profitable.

I’m quite sure that Daydream will be the next big thing in terms of expanding the audience for sharing VR content, also considering the fact that the GearVR is just something to see 360 pictures, for development there is a long way ahead and developers are not that interested since its release…

Hopefully things will change, but this is GearVR 1.1, a bigger FOV and a different color isn’t so much as an improvement in my opinion

I’m quite sure that Daydream will be the next big thing in terms of expanding the audience for sharing VR content, also considering the fact that the GearVR is just something to see 360 pictures, for development there is a long way ahead and developers are not that interested since its release…

Then I am not sure why you develop for Gear VR using UE4 if you say Gear VR is something to see 360 deg. pictures.

Actually people are not that interested in games (in conventional sense) in VR. People want to consume experiences and videos/movies in VR. Not so much games. Even with that there are plenty of games being released on Gear VR. More than on Rift/Vive for sure. Too bad Unity offers far better support than UE4

I don’t believe for a moment Daydream will offer wider audience reach. Samsung is #1 on the market with its top smartphones. So, you already have largest audience with VR enabled phones and yet not everyone uses VR anyway. Daydream will not make it a larger audience. People still have to buy new top of the line phones + Daydream HMD. Play Store is severely saturated and since Google will provide curated VR store, how that will make it different from Oculus Store ?

Hopefully things will change, but this is GearVR 1.1, a bigger FOV and a different color isn’t so much as an improvement in my opinion

It’s not going to change much in the nearest future unless there is a killer app/game released for Gear VR (which will motivate devs to look into VR development and encourage consumers to buy Gear VR). Plus, having poor support in UE4 doesn’t help it.

I am getting GVR 1.1 as I think better comfort, USB-C, wider FOV and upcoming accessories are worth upgrading from older GVR.

I’m developing with it just because its wireless, basically using it as a prototype for what comes next.

VR reached a wider audience because of games and, as of now, everyone is focusing on just developing games with it.

Oculus was a niche product, and yet a lot of people bought the Oculus itself and upgraded their pc to meet the requirements, and they did that just for play games.

As for 3D TVs I don’t think that this “watching movies in VR” will really take off, mostly because is not that comfortable.
They will need the top smartphone of course, and the actual case for the phone to turn it into a HMD and the controller ( which has a single gyro inside ) will probably cost less then the GearVR.

Every 2-3 months a new smartphone comes out, so my S7 will become “obsolete” in few months because new hardware is on the market, and considering how well they sell its no wonder that Google bet on Daydream, because they want to reach the casual audience with the VR.

It’ll be like the Nintendo Wii, everyone bought it but very few people play it after a while and there won’t be any killer app made for that, even if the concept is brilliant.

Oculus and HTC are doing weird stuff with the release of their games because of exclusive, and I’m quite confident that Daydream will fill that gap for casual audience, with simple, quick games and app to play while you’re waiting the bus or something like that.
Companies with a very simple concept became huge in short time, so I expect something like that to happen on Daydream as well, considering that you will be using your head and a dedicated controller.

Here are some facts: 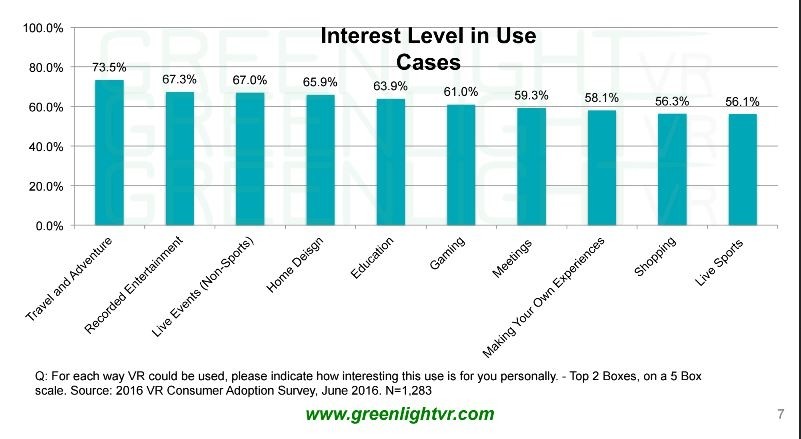 What do the majority of people who don't yet own a VR system want to do with VR? It's not gaming! 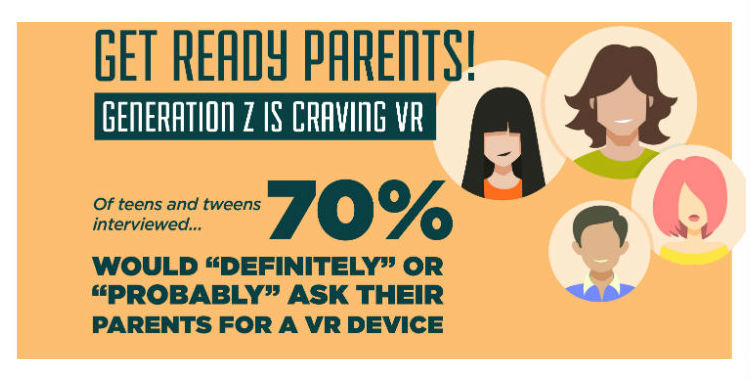 So no, VR didn’t reach audience it did because of games. It’s been said by Oculus, Facebook, Google, and various other sources that games is a small segment of VR. Gamers don’t rush to play in VR. I personally still prefer conventional gaming on PC than in VR. It’s much easier get anyone hooked to VR by showing them experiences than games.

Neither Rift nor Vive can brag about their audience numbers. It’s niche and will remain niche due to complex setup and costs. Gear VR is in a lot of hands already.

Again, iPhone is not going to have Daydream. So toss away that audience. What you are left with is Samsung, because that’s a leading smartphone seller for high end Android smartphones. So if you already have Samsung, why buy Daydream HMD when there is Gear VR, that is better and already has established market? So at the end of the day, you still have Samsung/Gear VR dominating mobile VR.

You Daydream fans think that somehow, magically, everyone who doesn’t own Samsung S6+ will drop their phones and buy more expensive Daydream phones + Daydream HMD. I am just puzzled what makes you think that.

no IPD Adjust, not gonna get it. Unless I somehow magically get a s7 which I don’t see myself manifesting or making a request into the matrix for right now, the phone I mean.

Apparently you are reading what you want to read and only your opinion matters, since you toss out every possible scenario I think it might happen, explaining why I think Daydream will fill a gap in mobile games, but then again that won’t happen because you said so…

All I’m going to say is wait and see

Motorsep, i think you (and many other people) are underestimating the new Daydream controller. Even without 6DOF i believe it’s quite genius and opens up many more possibilities for interaction than what’s possible on GearVR. You can see lots of examples on Googles’ YouTube developer channel.

I think Oculus/Samsung are once again being a bit short-sighted by no making tracked controllers part of the package, and they will face a similar situation to people comparing the Rift vs the Vive experience.

Daydream controller is cool, but it has nothing to do with how widespread Daydream will become and quality of platform/software/tracking.

Once Gear VR gets Rink, Daydream controller will become obsolete. Even if Rink doesn’t happen, perhaps Samsung will release 6DOF controller for Gear VR and then Gear VR + Oculus will still be ahead of Daydream.

History shows that homogeneous hardware is one of the key factors to success. Android devices are all different, even when they will be compliant with Daydream specs. Various hidden tweaks to OS and drivers make it problematic developing for various phones as is. With Gear VR you have only 2 SoC and the same exact OS for both. It’s easier to develop for, less headaches, etc. etc.

Well, history also shows that relying on separate optional peripherals for the success of your main platform is not such a great idea… so… we’ll see i guess