The wait is finally over; Book #2 has finally been completed and is ready to read… RIGHT NOW!

For those who don’t know about these books, here’s a little background information as to why I’m doing this and a little about myself:

My name is Ryan Shah.

I’m the Project Lead at Kitatus Studios, who are currently working on Super Distro in UE4 for PC, Mac and Linux.

We’re also using Unity, but for the Wii U version of Super Distro, as we’ve been given the privledge of being “Nintendo Developers” from Nintendo.

While working on both these projects, I noticed how much I’ve learned to depend on Blueprints. So much so, that I prefer it to standard coding a million times over.

As I’m also working in Unity, I noticed a lot of people on the Unity forums and out-and-about on the Internet could be benefitting from Unreal Engine 4 in their projects.

It’s just a simple fact. I’m not trying to start a fanboy war between different engine users (As I previously stated, I’m working with both Unreal Engine 4 and Unity), but there are a number of projects in Unity which could utlize the features of Unreal Engine 4 and become even better then they currently are.

I have noticed however, the reason a lot of these games are not built with Unreal Engine 4 is because the designers / programmers are turned off of Unreal Engine 4 because of the fact they believe they HAVE to learn C++ and the fact that the Blueprints system seems so confusing (When it’s really not) and they are scared to try a new engine as it looks complicated at first.

Realising this, It inspired me to work on a book, easing not only Unity developers, but anybody whose wanted to try Game Development into Unreal Engine 4 and Blueprints. But I didn’t just create the book for them, I also created it for each and every user of Unreal Engine 4 who wants a better understanding on the Blueprints system and for the people who want to code a whole game from Blueprints but just can’t figure out how.

The aim of the book is to subliminally teach you the Blueprints system, so by the end of the book you can feel confident enough to try your own tasks within Unreal Engine 4 and create your own projects.

The book is written in a very simply to read laid back way, as I wanted to keep away from boring people with very long passages of text (Like this friggin’ post, haha). So I included lots of pictures and simple explanations (I like pictures) to help you get your head around the Blueprints system without being confusing or frustrating.

I was approached by Packt about going with them to sell the book and that also got me thinking. Why the heck would I charge for the book? I left my job to develop Super Distro (Which I’m still developing at the moment) and working on this book was completely my own choice. I lost a few weeks worth of developing for Super Distro to make this book a reality but I didn’t do it for money. I did it for the love of Unreal Engine and game development.

So I thought to myself, “Hey, Why don’t I just release this book for free?” and that’s what I’ve done. The book is £0 / $0 / Insert Currency Symbol Here 0. If you want a physical version of the book, that will only cost as much as it takes to print the book and I won’t be taking profit from it. Why? Because I want to contribute all of my know-how to the community to help others achieve great things with Unreal Engine 4.

The free offer is exclusive to the Unreal Engine 4 forum community (As you guys 'n gals have been awesome!) - Everywhere else it’ll cost a low-fee (As Amazon won’t let me upload such a book for free :< ) but the money received from the Amazon version will go on the hosting of the book’s content files for many years to come!

This is Book #2, which is all about creating a Main Menu system in UMG as well as autosaving / loading the user’s settings! This is shorter then Book #1 and is what I consider a “Mini-Book!” 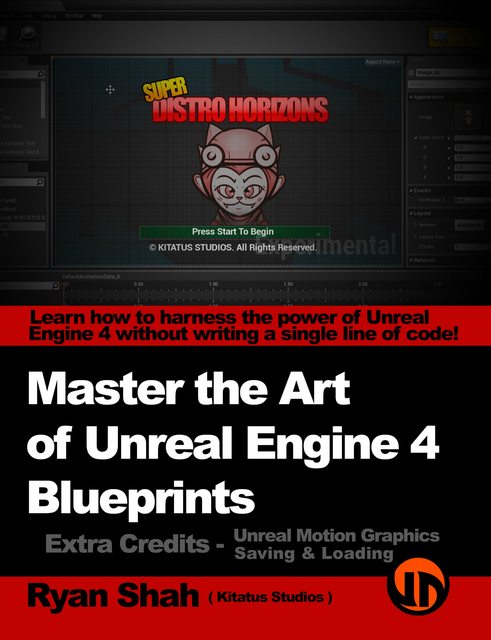 I made this out of love for you all, So I really do hope you enjoy it!

UnrealDevs is a network dedicated to experienced game developers. Whether you come from Unreal or other game engines, the UnrealDev network allows you to develop along-side other experienced community members. Follow UnrealDevs on Twitter for all the latest information andcheck out website for Community Showcases, Portfolios Tutorials and more!

Be sure to also check out the UnrealDev’s Youtube channel for some AMAZING videos in regards to Game Development and Unreal Engine 4!

A number of people have asked how they can support what I’m trying to do, so I’ve created a Patreon page for those who want me to be able to continue to create free content for as long as possible! - Link: Patreon

Have a lovely day everyone and enjoy! <3

Out of curiosity, why UMG for this book though? Seems it might be worth it to wait for 4.5 or 4.6.

Yoohoo ! Thank you once again Kitatus ! Omw to read it ^^

Out of curiosity, why UMG for this book though? Seems it might be worth it to wait for 4.5 or 4.6.

Because you can create amazing things with UMG and even though it’s still counted as an “Experimental” feature, it’s fully functioning and any changes will only be improvements to the system. When you read the book, you’ll see how I’ve used more Blueprints tied to the UMG as apposed to coding IN a UMG to make sure it’s as future compatible as possible!

Yoohoo ! Thank you once again Kitatus ! Omw to read it ^^

I hope you enjoy!

Thanks for your hard work!

Thanks very much, Ryan.

Unreal is an awesome community and people like you help it growing! I’m still confused with blueprints, but I’m really interested in learning. You provide me with a real opportunity to grasp a deeper understanding of them. Thanks for that!

Unreal is an awesome community and people like you help it growing! I’m still confused with blueprints, but I’m really interested in learning. You provide me with a real opportunity to grasp a deeper understanding of them. Thanks for that!

And this, right here ladies and gentlemen, is why I do what I do. I’m glad I can help. If you’ve got any questions with your Blueprints or anything, feel free to email me: contact@kitatusstudios.co.uk and I’ll try my best to help!

Not a problem, Enjoy!

Thanks. Much appreciated. It takes a lot to take time off work or personal project(s) to make things for the community, for free, no less.

Thanks. Much appreciated. It takes a lot to take time off work or personal project(s) to make things for the community, for free, no less.

Not a problem; It’s totally worth it when I know it can be helping people that need help with (in my personal opinion) the best engine on the market

I have no idea what is happening but Woo!..?

A lot of people have been asking about the physical version… Here it is!

The proceeds of the book (Most of it goes on Printing costs!) go onto hosting the book’s files as well as going towards a more permanent home for the book project files .etc!

KitatusStudios Thank you so much ,if I see French version of your physical books , i will buy it

Thanks! It’ll be translated one day, but I don’t know when exactly; I’ve got to find someone who’ll volunteer to translate first as I’m not too confident in my French!

Thanks! It’ll be translated one day, but I don’t know when exactly; I’ve got to find someone who’ll volunteer to translate first as I’m not too confident in my French!

It’s a good new for we French , i think , french version will be a succes because , at the moment , we have not UE4 documentation translated.