Hi
I have some landscapes I have already created that I was just using a water plane with so I was very eager to swap out the planes for for some proper water that i could also go under.
But im having some real issues using the water ocean body as anytime I try to place the spline where the shore line of the island is supposed to be it massively deforms my already finalized landscape to much, And on another island its just flattening it out.

If i place the custom water actor instead, I get the traditional water plane that looks great But there is no post process underwater effect and I can t seem to turn it on.

I watched quite a few videos on this but not seen anyone encounter my issue or work with custom water.

I have the same issue. An existing landscape and a few waterplanes. I also want to swap these out. In the unreal doc I read that the custom waterbody is the only one which is not affecting or carving the landscape. This would be our choice. But how to set it up.I want a water volume with underwaterpostprocess.

I read you need your own custom mesh: but a 3d shape or a plane?

Sadly all vids and tuts are explaining the other waterbodies and not an in depth custom setup.

Maybe we can keep in touch to see if there is a solution so we can share it to each other?

Hello,
I have been running into similar issues but I have had to modify landmass to account for this. It takes some tweaking. The one I am stumped on now is the ocean spline points, specifically the width of the shoreline. For the life of me I can’t get that to change in size as far as width. Anyone have an idea of what to look for or how to modify this?

most of the videos are frankly useless at this point. YT click bait.

Documentation is not much better.

Everything I’ve tried so far with the Water Body Custom hasn’t worked. I even manged to break it once to the point that it doesn’t render at all.
I would love some documentation explaining the Custom Water’s use. It stated it could be used for pools and stuff and that’s exactly the reason I’m attempting to use it. I’ve plans on doing the landscaping applications in the same project but if what you’re saying here about it messing up finalized landscape then that just won’t do.

Now starting to experiment with the new water system, which is really cool, I found the same problems. I did expect, that I can just add WaterBody actors to places in an already sculpted landscape, e.g. a lake on a mountain, but it does not work. If for example a lake is added at a higher elevation, there’s even no water getting rendered at all, but just landscape deformations appear.

There are lot of parameters, and I played with them, but always landscape gets deformed. From what I understand, that’s how the system is designed, using the LandMass plugin, which deforms the existing landscape.
From what I found, the only way to get it working:

This does not solve the issue, that adding water bodies in an already existing landscape destroys all sculpt work done before. And also, changing water body actors parameters later on also affects the landscape again - so ending up in adding a new layer again and again to fix sculpting.

So I’m also somewhat confused about the workflow as it is meant to be. Will need to watch some tutorials again, especially the one by Sjoerd de Jong, now with having some own experiences.

BTW: I thought, it might be useful to start a discussion about the many water system parameters and their meaning: Unreal Water System - meaning of all those parameters - General Discussion - Unreal Engine Forums

There’s an “Affects Landscape” Checkbox at the bottom of the Terrain details - from the description, it looks promising. But when unchecking this, not water is rendered at all. Not sure, how this is meant to be used.

If you set the height map settings to additive on the Lake water body it will not effect terrain above the water (if the water body is at a zero offset).

I’m trying the ocean component and there is no underwater shader as it’s shown here Diving Into the Depths of Water as a Feature in Unreal Engine 4.26 - YouTube
For me It’s just a flat plane with the waves, any idea why?

Hi zildazz, thanks for the reply. I still do not get it working, but thanks for the hint on the “Additive” Blending… Experimenting with this, but despite the description “Useful when you want to preserve underlying detail or ramps” - it totally destroys for example my volcano, where I want to place a lake into the crater. It’s kind of playing with parameters, but nothing helps. I managed once to get some result using “Min” Blend mode, but cannot reproduce. Still experimenting - it’s kind of a learning curve, I’ll need to experiment - as the plugin says “Still experimental”

Hi DEV7591, looks like I could reproduce your issue with missing underwater post processing material. Is this the effect you mean, just having ripples but no real underwater shading when looking upwards from within a lake?

while it should be this one?

I just came across this effect while playing with Channel depth parameter. Good one using 500 as value, bad one when increasing to 2000. Just found that while experimenting… Maybe this is your issue as well?

Hi DEV7591, looks like I could reproduce your issue with missing underwater post processing material. Is this the effect you mean, just having ripples but no real underwater shading when looking upwards from within a lake?

I just came across this effect while playing with Channel depth parameter. Good one using 500 as value, bad one when increasing to 2000. Just found that while experimenting… Maybe this is your issue as well?

Hi mate sorry for the delayed response, I never received a notification, found your post when making another attempt to solve this problem.

Yes, that’s exactly my issue, tried what you suggested but sadly doesn’t work for me, I move the slider left and right to ridiculous values and the underwater effect still doesn’t appear.

EDIT: This is happening for me with the CUSTOM BODY, I mentioned the ocean before but somehow the post process started working for that, but not for this one.

I think the whole problem I have with the water components is that they don’t like my landscape, somehow.
If I create a new project with a plain landscape everything seems to work but not with the heightmap based landscape I was already working on

As to the waterbody influencing existing terrain, watching the livestream with Sjoerd de Jong from 07.01.2021 (https://forums.unrealengine.com/unreal-engine/events/1849539-inside-unreal-water-system-deep-dive)turned out to address exactly that issue. Good to see, that Epic is aware of this.

Sjoerd de Jong explains, that he also had his terrain created before adding the water and he shows a workaround by modifying materials BrushAngleFalloffMaterial and BrushWidthFalloffMaterial, somewhere around 34:00.

Thanks to him, things are getting clearer.

Did you find out why the underwater postprocess doens’t work?
Having the same problem but it works in another projet and not in the one I’m working on.
Same default settings for every water component.

To those having issue with the underwater post process not showing, I had the same before i realized you need to enlarge the collision box in the setting, if you scaled the points or manually dragged em out, the collision doesn’t adjust automatically. I still cant figure out how to manage to get the ocean border to correctly adapt to my landscape tho, getting some weird square hole all around it. Anyone knows a solution ?

Also notice the Water Ocean actor needs to be near origin (i.e. don’t transform it).

Awesome worked. Collision is not the setting I thought would be used to expand underwater post processing size. TY for finding it.

Did you also get the Post Processing to work for WaterBodyCustom? No matter what I do with collision, it just doesn’t show the underwater effect 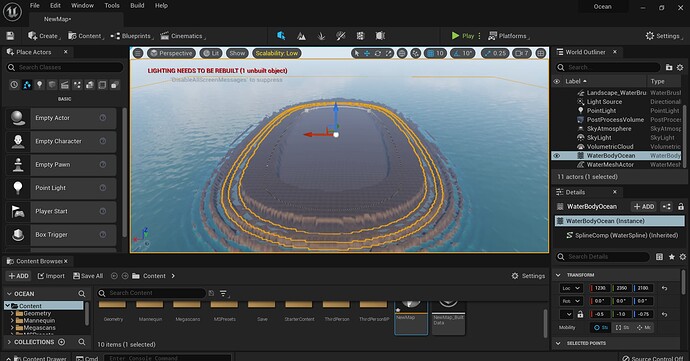 hello Unreal Response is verybad with tons of bugs