Hi, we have a problem and hope to find some help in the community.

We are working with AR Shared World classes and local Lan-Session on iOS.
Problem is that our replicated Actors freeze on clients and do not move for around 2 minutes until movement replication suddenly starts.

We set up AR World Map synchronization (shared AR world) according to this article:
„A preview of persistent and shared AR experiences in UE4 4.21“ on Medium from Joe Graf. Link: https://medium.com/@joe.j.graf/a-pre…1-c47b3331a4b1

Since this preview from october 2018 no form of documentation, content example or tutorial ever followed, so we had to guess, check source code and try to get things working.

After the client connected to the server and the Server spawned a Character, we can only see movement of characters and actors on the server.
On the client the replicated actors remain still at there spawn transform.
It takes several minutes of waiting until movement finally also replicates to clients.
After this mysterious waiting time, that we cannot explain, everything is replicated/synchronized pretty well.

Each player controls a character to move. The characters are not possessed, because the AR Pawn that holds the AR camera needs to be possesed of course (it is set to not replicate). Inputs for Characters are sent via RPCs to the server, to add server authoritive movement to the character.

Maybe less important, but still mentioning: On each character are 3 physics simulated actors attached, whose movements are replicated too. But a test with a new project, the standard UE4 mannequin character and nothing attached gave the exact same result of a long pause before any movement replication starts.

This only happens when the function „SetARWorldSharingIsReady“ in the ARSharedWorldGameMode is used.
If we don’t call this function, then no AR data will be delivered from server to client and the movement of actors is instantly replicated as expected.

This leads us to believe that there is something going on in these ARSharedWorld classes rearding networking.
https://github.com/EpicGames/UnrealE…eality/Private

Connection is saturated for several minutes after AR Shared World data was sent.
Using stat net, on the server the “saturated“ stays at 1 during the transfer of AR data and the initial movement freeze, then changes to 0 when movement replication begins. We wonder why the connection remains saturated even after all the AR data was delivered?

Other stats can be seen in the attached screenshots.

Thank you very much for taking the time to read! 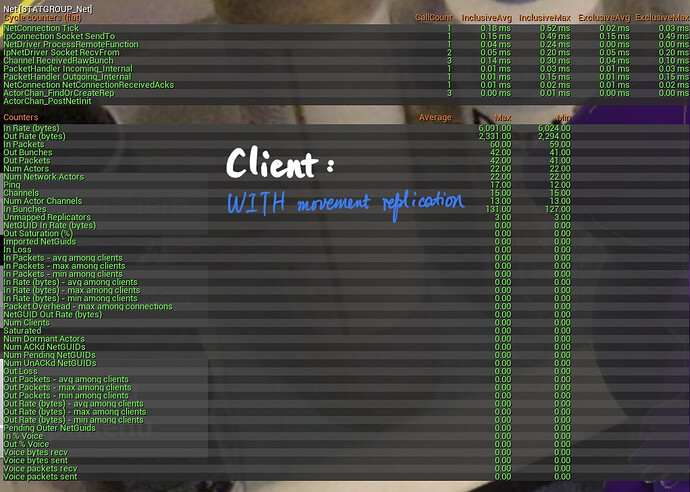 Hello.
I have the same problem.
ARWorldData has been successfully synchronized, but the actor cannot be duplicated afterwards.
I think ARWorldData and PreviewImage need to be sent in some other way, but have you found a solution ever?

Hello,
no, sadly we haven´t found any solution. We have checked the ARSharedWorld classes in source code, but still no idea.

This function may help.

I am also finding AARSharedWorldGameMode::Tick is a private function member, so how can it be called by the engine? By reflection system?

Thanks for the reply, we used blueprints, called SetARWorldSharingIsReady and assume it succeeded, as the AR sharing process worked fine.
It’s only Actor Movement (and skeletal mesh animation) that is blocked, after ARSharing finished.

We made some process with two steps:

We gave command line arguments when the server opens the multiplayer player map: -bIsLanMatch and -lanplay

Changed settings in the DefaultEngine.ini to higher values.

and probably some other settings i currently don’t recall to higher values.

(Internetspeed AND LanSpeed to high values because an older forums thread reports the Engine did not use LanSpeed in lan mode, so just to be sure we changed both values.)

This seems to work at first glance, but we are not sure if there are any downsides to this. Waiting for 4.26 before further testing.

@svandex
For you problem with AARSharedWorldGameMode::Tick, try a C++ post or the discord server https://unrealslackers.org/ , Good Luck

Can everyone tell me how to make a shared ar experiences in 4.27