Move large group of meshes all at once

I am working on making a top down shooter and instead of making the player move up I am going to make the ground and all the objects move down. it seems ok to move a few things at a time but I would like to move a nice set with a lot of objects. I was thinking a “for each loop” would work to move the group of objects but it takes almost 4 seconds for the “for each loop” to finish.

I would appropriate a better method to move a mass amount of objects. 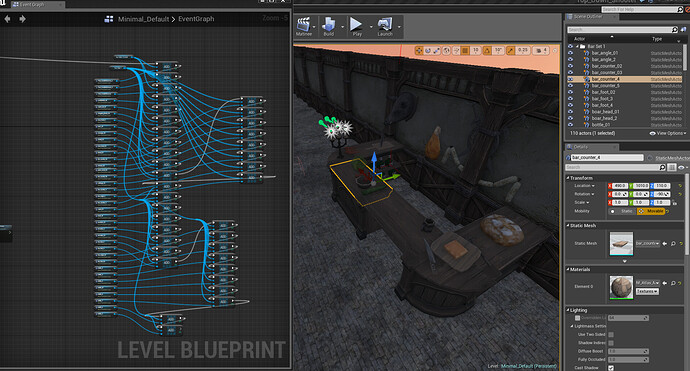 Let me start by saying that it is always better to move as few objects as possible. By that I mean if you can you should only move your character and not everything in the level.

It’s not only bad on performance but also horrible to create a new level as you would have to add each object to that blueprint every time… just a tedious thing one shouldn’t have to do.

If you have to the next best thing (since the amount of objects you move is bad… not the size or amount of polys) would be creating everything which belongs together as a mesh and move it as one piece. Just putting everything together as an actor should be enough, you don’t have to go back to your 3d modeling tool or anything and design everything in there.

I would simply move the camera up. It’s cleaner and faster.