I have followed Unreal’s documentation for iOS provisioning and Apple certification to a T and that part has worked great. Using the my Development certificate and provisioning profile, I can Launch from the editor to my iPhone, and it works! Using the Distribution certificate and distribution provisioning profile that isn’t covered in Unreal’s documentation, with Build Configuration set to “Shipping,” I can also successfully build an .ipa file to upload via Xcode’s Application Loader, but I get this error: 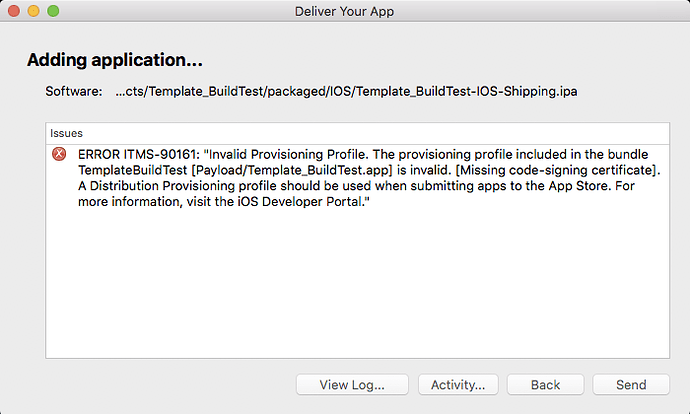 I removed my Development profile and certificates to minimize risk of error.

Alright well, it’s been over a month. Unreal’s iOS builds seem broken to me since multiple successful Unreal iOS builds do not properly upload to Apple’s servers via Xcode’s Application Loader. All of my signing and provisioing and certificate requirements check out, I have recreated them specifically for distribution countless times. I’d also like to point out that this is a unique issue that is not answered in any of the related questions on UE’s AnswerHub.

So I’m giving up on iOS, I no longer have time for this. I guess Android all the way it is then. Thanks errybody for all tremendous help.