Welcome to the May UE4JAM Submission thread!

Here is our submission… by funkinessfactor…(Graham Chow, Elizabeth Chow and Louka Chow)

Here is a teaser picture (but you can probably guess this guy is going down). 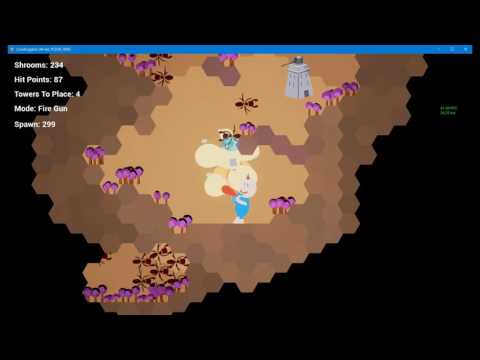 Instructions:
This is a platformer where you can jump [space bar] and move [a] and [d] key. There are three modes [tab] to toggle between them:
Gun: Your guy will fire a rocket towards the mouse cursor on left click
Build: You can build and destroy hexagons with the mouse - this consumes shrooms that you collect by running over them
Place Tower: You can place a tower like in a tower defense game. You only get 5 at anyone time. Ants can destroy them and then you get it back.

Ants can attack you with a non-ranged acid attack. They generally stick to the walls or other ants.
When you build or destroy a hexagon, they take a while (few seconds to become solid), ants can travel though them during that period (aka the ants only take into account new hexagons when they re-plan their path).

You win by getting to the back to the top, hence what goes down (you) must come back up (to win).

A sci-fi horror ambient track that slowly fades in and slowly fades out. Good for adding an air of uneasiness on an empty planet or spaceship. The source is a very heavily distorted clip of myself making noises with my mouth. MP3 320kbps,...

This jam theme was kind of hard and I went a bit risky this time. I also had bug, where on packaged builds sometimes the meshes wouldn’t simply be there. The latest package was meant to be for debugging, but then it suddenly worked on that build. And stopped working after that again

. So that’s why there’s this boolean print string, sorry :rolleyes:

Also if someone doesn’t get the theme connection, rollercoasters must go up before they go down.

I also made time lapse of some first day progress, but then I forgot too record the later parts 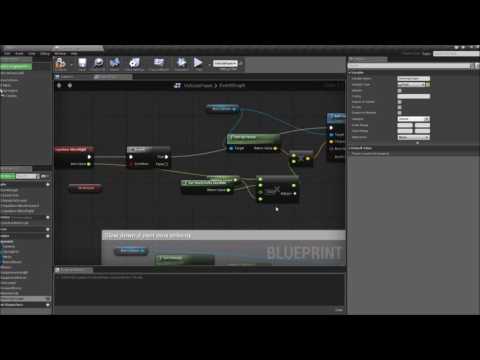 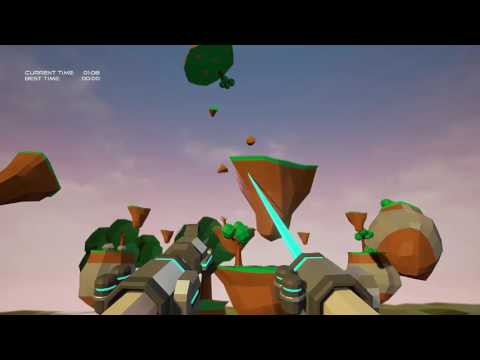 “Hook-Up!” is a Single- or Multiplayer “Rope Swing” Game. Your goal is to swing through the broken world and reach the end as fast as possible.

You can play it with friends and climb to the top together while comparing times or play it alone.

Instructions are shown after starting/joining a Server (Singleplayer - Game).

Description: A 2.5D point and click puzzle game where you have to lower spheres to get all the lights to a green color, however lowering a sphere might lower or lift up other spheres.

The game’s logic(programming) got somehow deleted half way through the game, so if there’s any bugs let me know and we’re sorry in advance. Also there’s some issues with the fps, so this might not run perfect on lower-end pc’s.

You can press “Y” to show FPS. 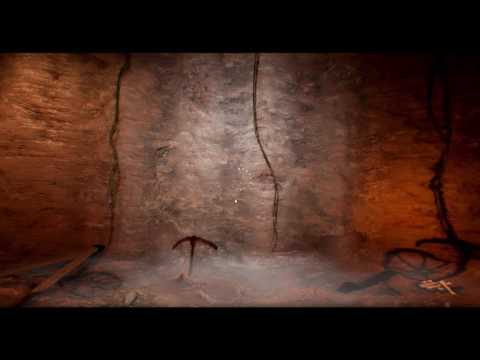 Sources:
Charlestons reused some of the tessellation from another project and adjusted it to fit our project.
Background music and correct-location sound are royalty free music assets.

Description:
Ready for some fishing? Grab your trusty, stick-like (sticky?) fishing device and get going. Simply click the water surface and wait for something to come up. Refraction may not be your friend here, though.

Assets:
All Assets were created during the past two days, with the exception of the wooden floor material (M_Wood_Floor_Walnut_Worn from StarterContent) and the water surface (BP_TranslucentWater from the Water Planes Learning Sample). Some help/inspiration from other StarterContent and ContentExamples.

Turns out I actually found some time to join in for this one. But as usual, there’s a ton of things I’d really liked to improve (like the fish AI) or include (like a settings screen), whilst lack of time didn’t allow me to. I do hope it runs better on your machines than it did on my iGPU, when PIE was fine the standalone build was running rather sluggish and even throwing some alignment off that I couldn’t really debug properly in time. But there it is, enjoy! 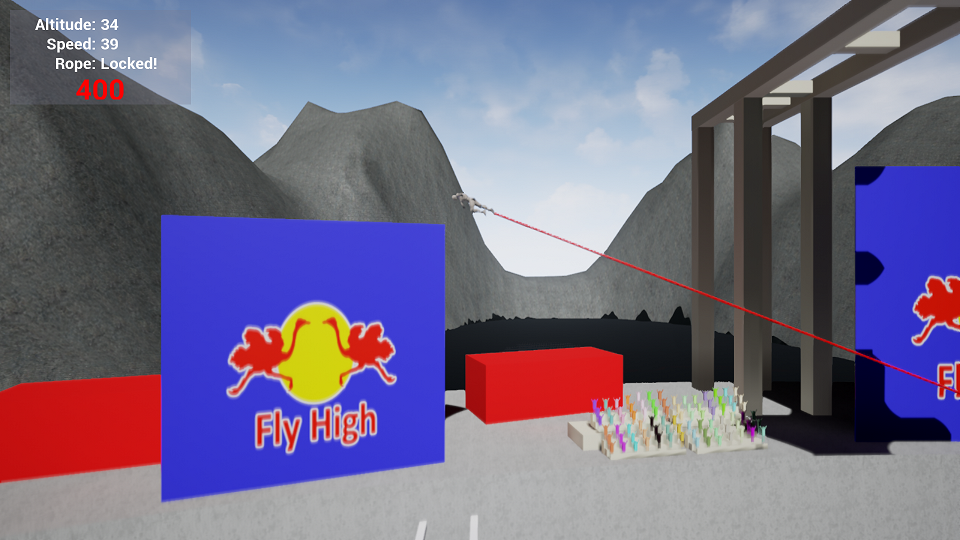 Edit: I was informed that the archive could not be opened.
I know that it is just after deadline so I’m probably disqualified

**Description : **
Bungee Jumping (There are some differences, I know bungee jumping doesn’t work like this in real life :P)
Steer with A and D, use Space to jump, lock and release rope.
Rope will extend until you lock it with Space. You can adjust it’s length this way.
Collect as many points as you can and try to land as gently as you can.

**Assets: **
Ambient sport event sounds from freesound.org.
Everything else was either made by me or comes from Starter Content.

**Notes: **
I run out of time on this one. Getting physics right in UE is hard. 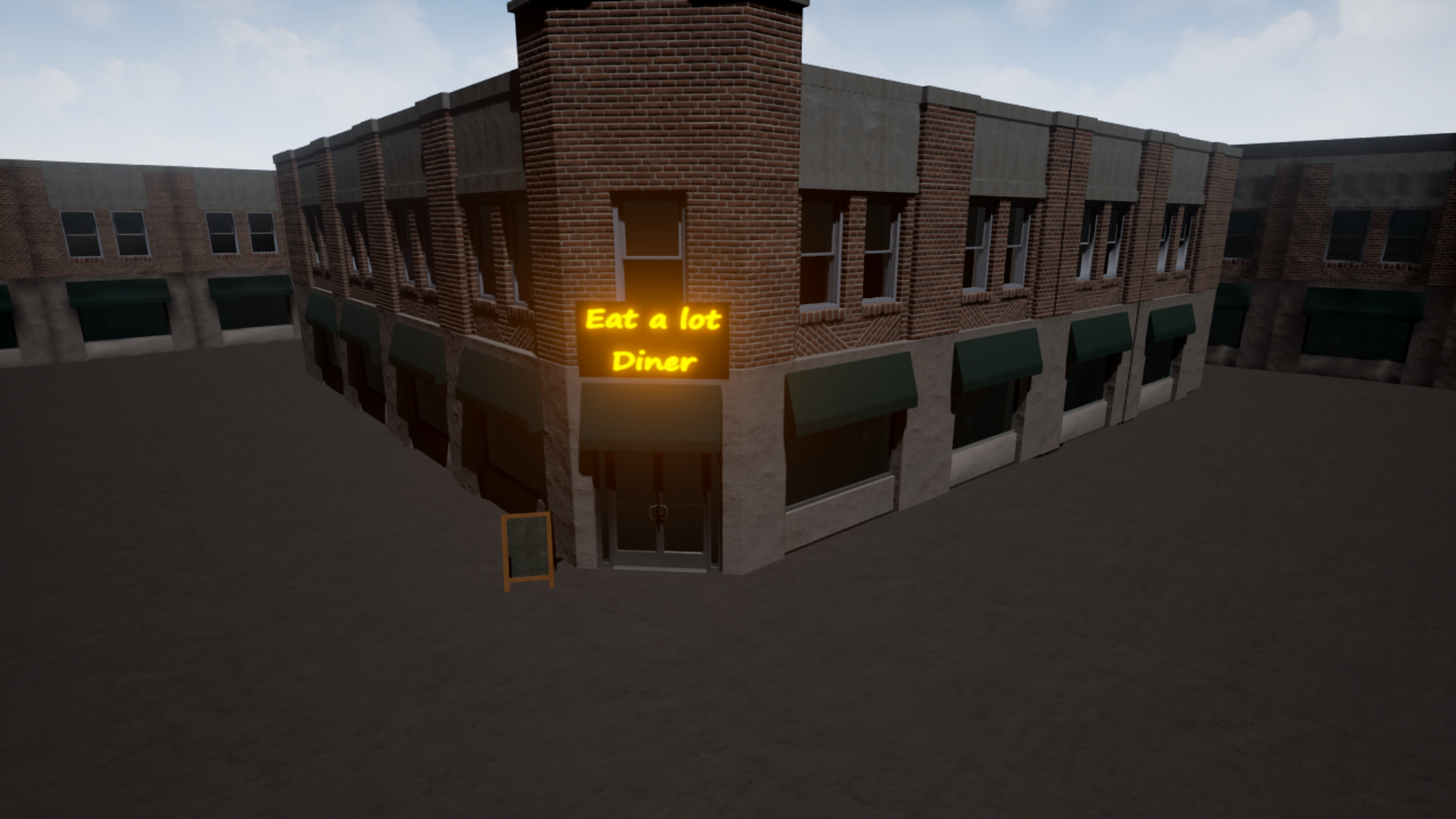 Description:
You have recently received prosthetic arms and have joined an apple eating contest at your local diner. Try to beat your nemesis by eating the most apples. 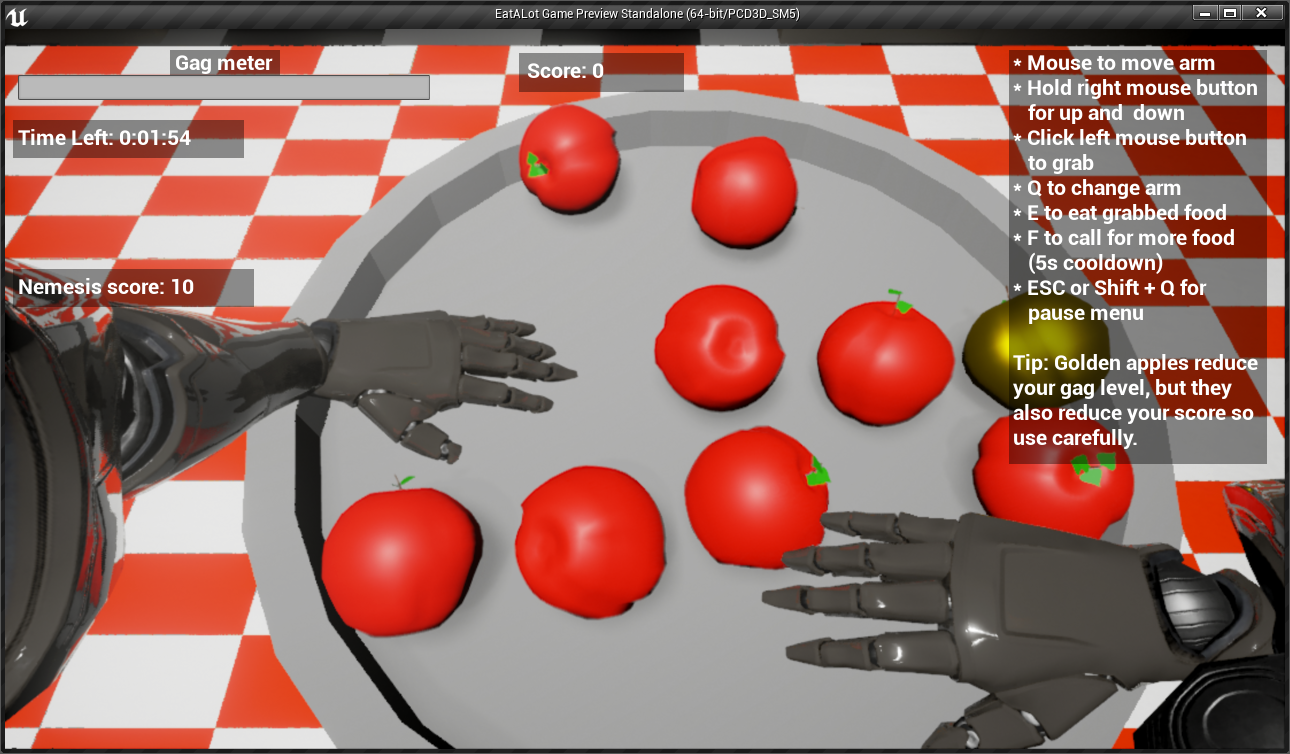 Another fun jam. Learned some stuff, had my ups and downs; but it’s all good.

There is a bug in the first level that doesn’t reset the player if the goal isn’t reached. If the player wants to reset the level to try again in the submitted entry, just go to the pause screen (by pressing Tab) and then push the “Level 1” button near the bottom and the level will start again. If you would like to play the game without the bug, on the bottom of this post is a link to the game with that bug fixed; but it is not the submission because it was well past the deadline for this game jams deadline. Used starter content (for a material) music from NCS (No Copyright Sounds, Links below) 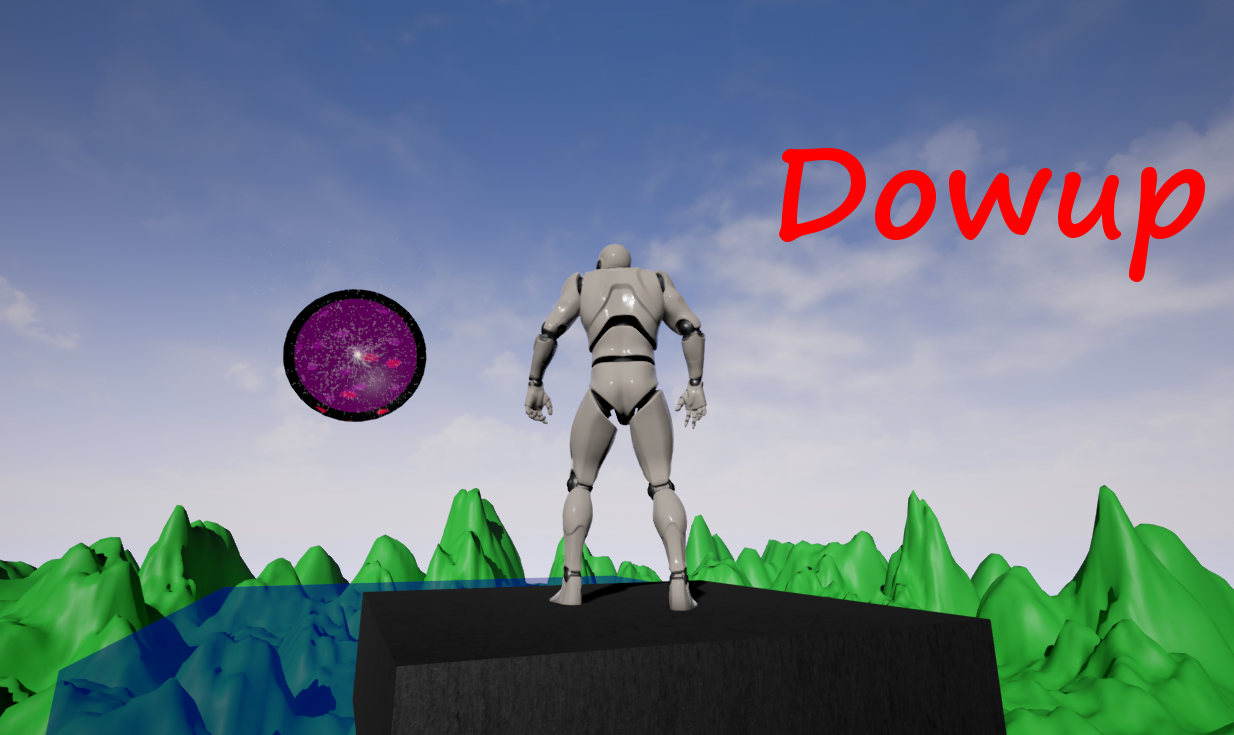 Downloadfor the fix to the respawn bug in Level 1 (not the game jam submission).

Description:
In a world where rockets and cities are fighting against each other, here’s your job to save the city. To do this you have placed a wind blowing fan on your car, and you can now blow those dangerous rocket away from the city.

Good luck and have fun

Description:
The world has fallen apart! You need to get home, but the only way to do that is through Pointals! Fall down onto the fallen platforms, collect enough points then climb back up to activate the Pointals!

A nice little platformer for you to play, enjoy!

Everything apart from one sound effect and music were made by CalamityPixel.

Submission - Help I Need an Adult - A Bad Day

Used Audacity for Recording the Excellent Dialogue.
You can also find the complete source to the Game at - GitHub - MWadstein/UE4-May2016-Jam 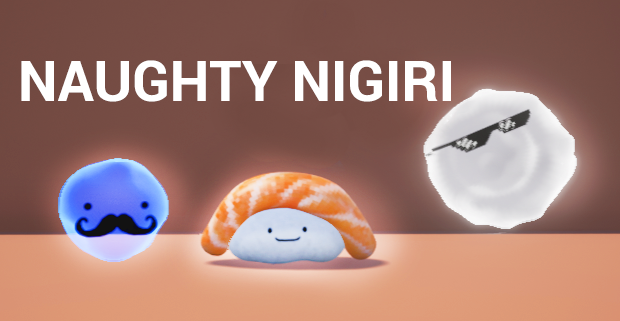 Description : You play as the only piece of sushi that survived being devoured by a giant monster. The only escape is to make the monster sick, and get up out of there before you are digested!

Recycling has taken over, and the town dump is failing. The owner has said that if the dump doesn’t have 100,000kg of stuff stored in the dump in the next six minutes, you are going to lose your job.

Find stuff, and get it to the dump or you are fired!

Mouse to move camera, WASD to move character. Right/Left Click sucks in objects and blows them out. Score by spitting items into the town dump!

Attribution:
I made all assets and effects for the jam, except for the background music. Credit for that goes to Eric Matyas @ www.soundimage.org

Game pad should work as well, but wasn’t tested extensively. I hope you enjoy!

A SteamVR/Vive Game: A gameplay re-enactment of the physics in primordial space prior to the Big Bang. Close anti-matter rifts and see if you can survive the onlsaught of anti-matter particles. Survive and allow Matter to thrive!

**Objective/Theme fit: “What comes down, must come up” - **
Challenge of the game is to keep closing the rifts which is being bombarded by anti-matter particles, making it dwindle down. Closing rifts will help size it back up again. As Spahaleron Prime, you need to swoop down and grab matter particles and bring them up to the opened rifts - that is, before Matter particles fall down (they gain gravity after a set period).

Game is time based and your cue is the music cycle/tempo, if you manage to keep the matter pool up by constantly closing rifts, you get to the victory end game - see playthrough video below: 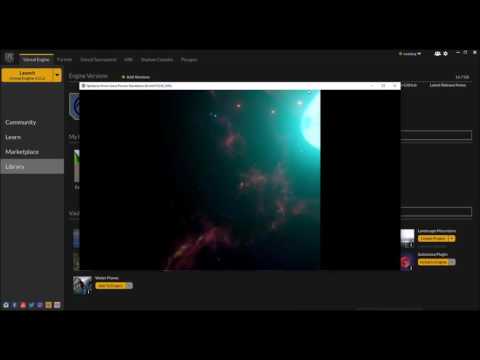 Controls:
Flying: Point to where you want to go with the Vive controllers and hold either the thumpad Up or Down button to fly towards that location.
Grabbing: Press trigger to grab particles, there’s a small range for the pickup. If you release the trigger, the matter will be released and will bubble up. You can also try throwing the Matter particles up to the rifts, but be sure your aim is good

Credits:
**Original Music **by Kevin Macleod with slight modifs to fit theme/mood, SFX by Corsica S
Assets tweaked from Phoenyx/Alien skies purchased from the Marketplace.
Dialogues are my own 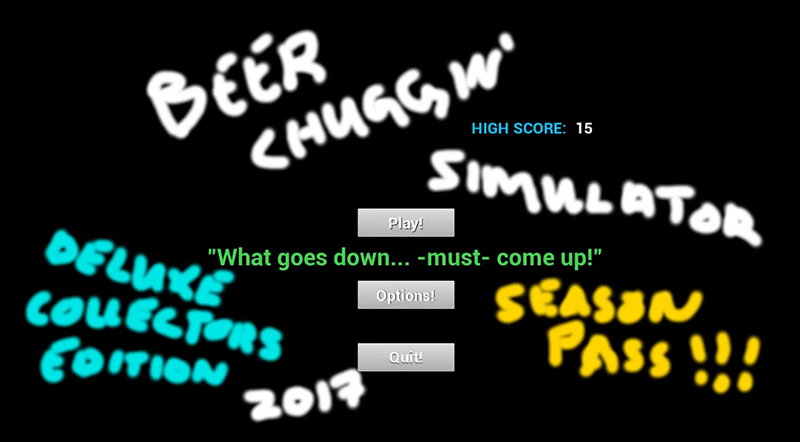 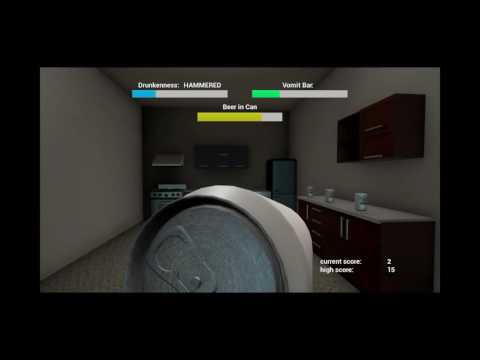 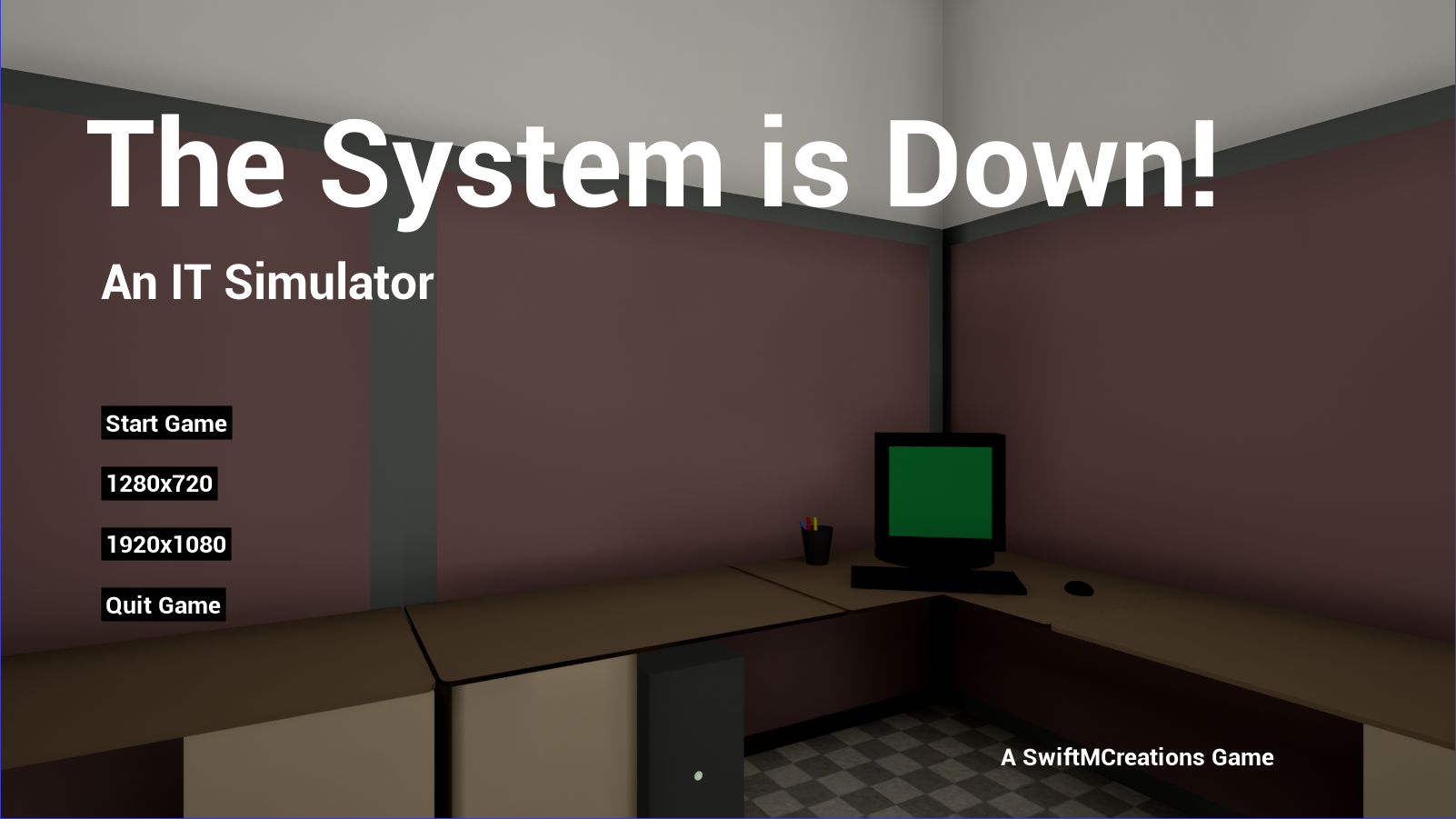 Sourced assets only include two particle effects from the starter content, a starter sound file, and the material for the floor (also starter content). Everything else was created for the jam, during the jam.