When I first create a material and bring in 1-2 textures, it lags insanely to the point where my mouse is next to unresponsive and ticks across the screen. If I hit the save button at the upper left, it corrects itself and runs perfectly smooth.

When I make a change to any parameters, the editor goes back into crazy lag as it starts to compile shaders. Even when I have as little as a single diffuse, normal and 2 constants for rough/metal, it compiles upwards of 140 shaders (worst case was 1004) and takes 1-2 minutes to complete. During this compile time I am lagging so badly that it’s best to just not touch my computer. Once the compile is completed, it seems to once again correct itself and be 100% perfectly responsive and smooth.

I don’t think my specs are bad and I’ve tried turning off the real-time previews, but nothing seems to help the issue. It’s making it next to impossible to fluidly iterate through my material settings to get a good look without wasting almost 95% of the time just staring at the “Compiling Shaders” box. I’d venture to guess that it’s slowing down my production time by about 323,448.314%.

Is this just me or is this basically how the material editor runs in general for everybody?

This is odd that you are experiencing this issue with the set-up you provided. Whenever you make changes and apply the material, it will compile the shaders as needed. Although with a very simple material set-up as you described, it should not be taking that long to compile, or giving you such trouble.

First try updating your graphics driver to the latest version to see if this helps resolve your issue.

Could you also provide me with your dxdiag so I can further investigate as well?

I just updated to the 11/4 drivers from NVidia and the issue is a bit better, but still somewhat persists. Compile times seem better but my mouse is still lagging while it’s doing it.

Looking at your dxdiag I noticed your BIOS has not been updated since 2008. If this is the most recent version of your BIOS available then that is fine, but this could be causing your computer not to perform as efficiently as possible. Try finding an update to your BIOS and see if this does not help improve your performance.

I also noticed you are only using 4 CPU’s under you processor, which is a fairly low amount for the recommended specs.

I was under the assumption my system specs fit within “recommended specs” due to the following statement:

Here’s what we recommend to get started developing with UE4 right now.

Are these actually listing the “Minimum System Requirements”? Does it actually require a hex-core +?

Yes these are essentially the recommended minimum, but the engine can run on lower end machines as well. Just not extremely well which is why we give these specs to the users as the recommended.

I asked another member of the team about your specs and you should be within the good range of running the engine so it actually is not your set-up. The issue must be occurring elsewhere in the editor.

On that note, try editing the your “Engine Scalability Settings” to see if this reduces the lag you are experiencing. Use the image below as reference as to where to edit these settings. 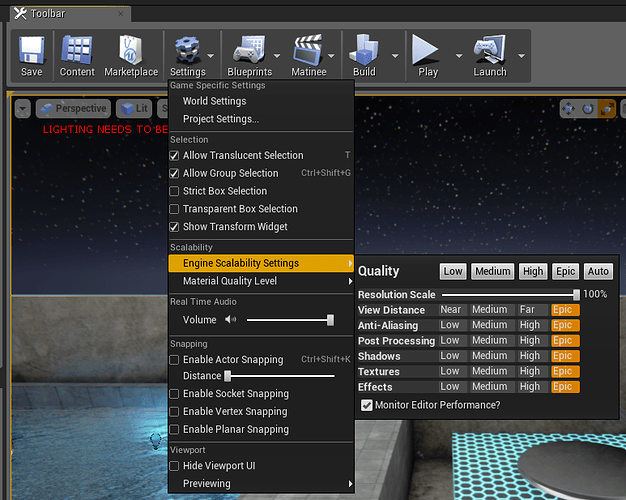 Sometimes using the “Auto” button works well on how to gauge/find optimal settings for your computer.

Oh sweet, I’m still new to the editor and didn’t actually see those settings. Everything seems to run a lot smoother just dropping AA on that actually. I think I’m good now and can call this resolved. Thank you for taking the time.

You are quite welcome! Let us know if you need anything else