Hi everyone!
I am starting to mess around in UE5 and testing out Lumen. First thing I noticed is that a fresh scene tanks my framerate.
I tried to build a small forest scene with nanite and some trees/foliage, which I already optimized with LODs.
When I run the GPU Visualizer, I get this result 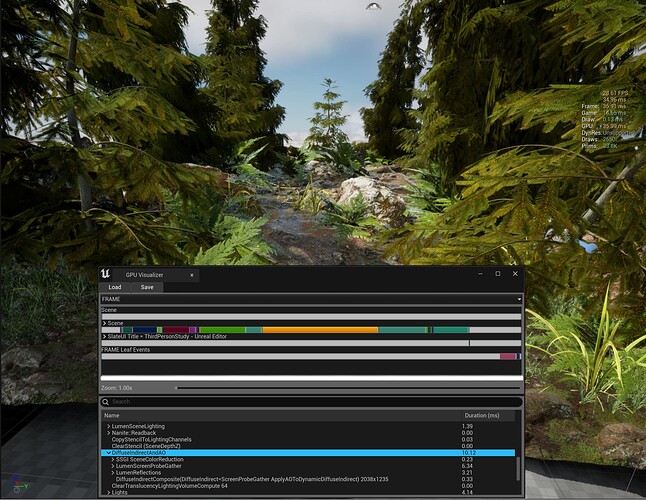 DiffuseIndirectAndAO1920×1484 332 KB
The Diffuse Indirect and AO seems to be really costly
I already optimized shadow maps, but as you can see from the GPU ms that’s not nearly enough.

Other useful info:
I have basic Lumen setup, with 1 directional light and 1 skylight. 1 Volumetric Cloud.
A few Megascan assets, and the birch trees assets from the marketplace (with heavily reduced LODs).
Here are my project settings (that I messed around with) 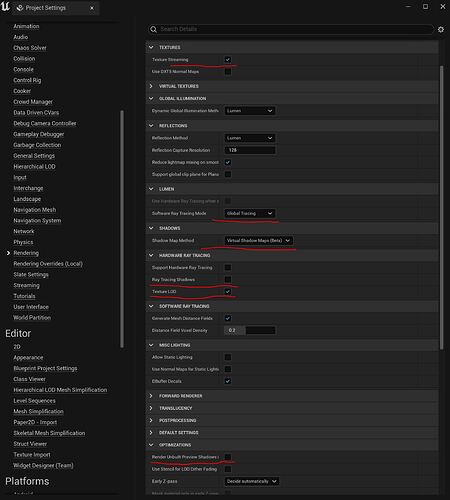 If this topic is useful, I hope it will help others like me, who are new to UE in general, but who also want to learn the new tools as they become the new standard.
I love Lumen and Nanite so far! I hope I can get them running properly on my machine.

UPDATE:
By changing the Engine Scalability Settings, towards the high-medium, for the first time I saw all the ms and framerate go in the green. But it still dips in the yellows when I put a character and start moving around the scene.
Material quality is low.

Well you didn’t list your GPU, which is what does the overwhelming majority of the rendering work.

It’s not a low end system but it isn’t high end either.

You should be aware that Lumen at “Epic” scalability is expected to run at ~8ms on next-gen consoles including the PS5 (roughly equivalent to a 5700XT, supposedly) at 1080p. They’re targeting “High” scalability for 60 FPS projects.

In terms of optimizing, it’s not easy… There are hundreds of cvars for Lumen that you can tweak but none of them are documented. I asked about better scalability options in the Lumen thread and was assured they were focused on providing better options in the future. For now probably the best thing you could do is render at a lower screen percentage.

I would also note that you should not be profiling in editor. Use a standalone process or packaged project.

Wait till the console commands get thinned out a bit, better documented, and general optimization is applied. Then tweak things to your heart’s content.

Thank you both.
@ Arkiras:
Yes, I indeed tweaked the quality through the Engine Scalability Settings to a lower value than Epic.
I wanna share my settings also for anyone who has a computer like mine. With these the graphic loss is not huge (especially for the awesome lumen shadows and lighting) but I was able to run the scene at 30-40 fps.

If you have any other suggestions I would love to hear them.

It would be nice to see a demo from epic on how to optimize a scene with lumen and (not only) nanites for medium to low end pc.

As a note: I noticed that Effects below High, Shadows below Medium and Anti Aliasing below High, do not look great.