I tried to find other posts regarding this, but I didn’t really find much. I’ve tried creating a VR scene from scratch, just dragging in some assets to see how Lumen lights.
While doing so I’ve set everything to use Lumen. hoping that it would work with SteamVR.
The preview in the editor looks nice, but it seems that in the actual VR preview, the GI pass is actually being skipped, as all the bounce light is missing from the scene.
VR: 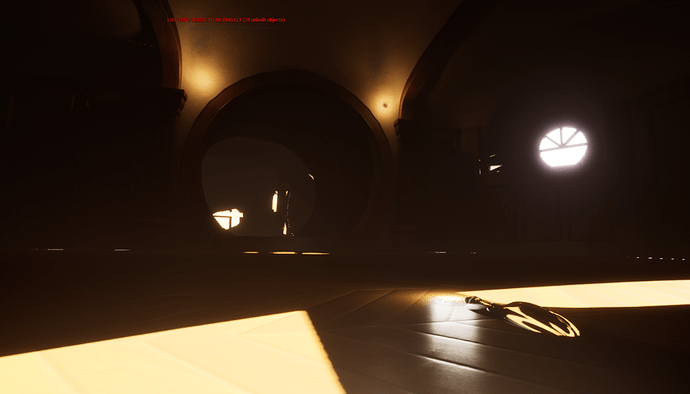 This also lines up with the preview in the Editor with GI being turned off.
Editor (GI off):

It would be great to know if there is a fix or if it’s at least the plan for Lumen GI to eventually come to VR in UE5.

It’s the feature I’ve been looking forward to the most!

It is highly recommended to create your VR project using the VRTemplate in UE5, because the project settings and plugins are already configured for the best VR experience. If you create a VR project in UE5 Early Access, you must disable Lumen by setting Project Settings > Rendering > Global Illumination to None. Lumen is an Engine Default in UE5 and is not currently supported on XR platforms.

It was stated however that they should at some point later.

That’s a shame, I’ve heard that nanite isn’t supported, but according to yesterdays livestream Lumen + VR should work… so I was hoping for the best ^^

Yes, I know, I watched it too, and I was surprised by the answer given to this question, as it is something I already investigated.

But unless there is a special way to make it work with VR I don’t know of, other sources state Lumen (and Nanite) don’t support VR for the time being

Maybe (hoping) it’s in the works. Watched the stream as well so spend a few hours today trying to get lumen work in vr.

Yeah… it’s a shame, but since they also mentioned that nanite will be coming eventually, and that he assumed that Lumen is already in there, sounds like it’s definitely going to work eventually

yesterdays show (june 10) revealed lumen is not coming to VR at all. Two highrez screens + high framerate makes it impossible. Too bad.

It seems to be a technical issue that may challenge the way nanite and lumen have been setup. I would imagine that VR would require some very specific solutions too. Foveated rendering combined with a form of ‘Foveated’ Virtualized Everything (Texture, Mesh [nanite], Lumen [Shadow Maps etc] or something. In order to get perf where it needs to be with VR, it likely needs to be constructed from the ground up, but idk. If I were a skilled programmer, I’d build it and let EPIC buy me out. LOL Gotta have eye tracking for the foveate stuff to work too and that’s very platform specific rn.

i have gotten lumen and nanite to run just fine side by side on 2 cloned clients. the limitation is inside the single engine viewport. it cannot do split screen modes either. any display of a secondary camera causes this. havent tested render targets yet either. im thinking ndisplay with vrpn setup properly might work out given they each run their own process but this would take a lot of work. ive gotten ue5 to run ndisplay but i cannot figure out vrpn and using ndisplay in frame sequential mode didnt help when trying to run stereo mode or side by side. the best i could think of is a render target thats cloned and cut a little differently with an offset for the eyes so technically its one big screen made into a vr type visual. not perfect but might look ok. thats where vrpn comes in too and hoping urneal doesent have a fit with all this. probably wont work out well. also quest 2 loses controller functions but not the tracking when in non-stereo vr mode. you can use virtual desktop with xbox 360 controller trick that it does but you lose tracking with that and only gain gamepad inputs.

Telling me they can’t just calculate Lumen for one eye and propagate to the other eye? Why would they need to double up on calculations. Bounce light is kind of universal.

ive been googling every day for someone to save us all from boredom and get some of this action in vr. ive quit making my vr game until this is fixed

Then you are going to be waiting a very long time. Epic said in their recent Lumen live stream that they will not be bringing it to VR due to performance issues with getting it properly working in VR, which is a HUGE bummer. Honestly, the fact they got Nanite and Lumen working this well is already black magic in my eyes, in time I bet they could do it, but if they do it probably won’t be for a long time. :\

Telling me they can’t just calculate Lumen for one eye and propagate to the other eye? Why would they need to double up on calculations. Bounce light is kind of universal.

And yet, some VR is just a single screen with 2 lenses and a custom aspect ratio. It doesn’t have to be perfect to use the same calculations. True Indirect lighting is indirect lighting regardless of the viewport, at least within a radius of the viewport. There are solutions like VorpX that make some non-VR games enjoyable in VR. I refuse to believe a prototype isn’t possible.

I’ve never used VR, but I know it gets complex and having a high framerate is necessary in order to prevent motion sickness.

I refuse to believe a prototype isn’t possible.

From the stream, I got that it was “possible”, but not practical.