I think you should check the Meerkat demo. Maybe not related 100% directly (or not only) to Lumen GI, but quite sure indirectly, at least. Or if you could report it to the respective team…: 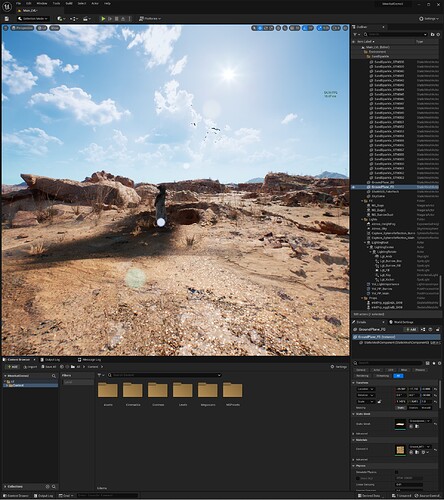 You can compare that GI and those Eagle shadows with the UE5.0 and RT GI enabled (quite better) version: 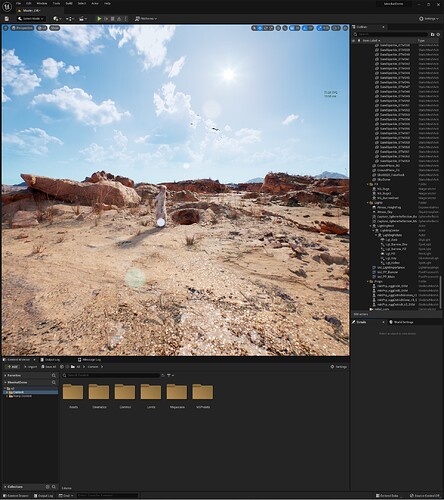 In addition, in that UE5.0 RT GI enabled, you can see the high 70FPS framerate. If I enable Lumen, it keeps more or less the same, that’s ok, but if I additionally enable RT shadows on UE5.0 the framerate is higher, like 80FPS. However, if I do the same in UE5.1, FPS with Lumen are lower, like 55FPS vs 60 of RT GI. But, if I additionally enable RT shadows, the framerate goes to somethig like 4FPS! (versus 80 in Ue5.0)

In summary, you can create a Meerkat UE5.0 and 5.1 projects, and compare them using Lumen vs Lumen, but also RT vs RT and RT vs Lumen.

I did see a drawcall difference between day& night: 315 vs 1958 so I’m investigating that one. Might be something with spots that have a self-illu material in the night scene.

It’s probably a CPU bottleneck due to this high amount of draw calls then.
Have you found what’s causing it? I’m actually pretty curious.
Might it be an issue with occlusion culling in VR when loading the night scene?
Did you try enable/disable Round Robin Occlusion to see if there’s any difference?

IMO, the team should focus more on improving HW-RT Lumen and increase its speed compared to Software-Lumen. Otherwise, RT cores and Ray accelerators are being wasted and a lot of performance will be left on the table. @jblackwell @Daniel_Wright

I am aware that Software and HW-Lumen are different techniques (Signed Distance Fields vs triangle Raytracing) but there must be ways that combine the benefits of both techniques and speed up the calculations using the additional hardware in modern GPUs. 4A Games did an amazing job with their GI solution in the Metro Exodus Enhanced Edition that runs with HW-RT on consoles at 60 FPS, so I am pretty sure it’s possible for Epic to find a way to achieve that as well.

I’m trying to get the Lumen GI to look more like the path tracer. I really don’t like these dark AO-like shadows in the corners in Lumen compared to path tracing, but I can’t find a way to get rid of them. 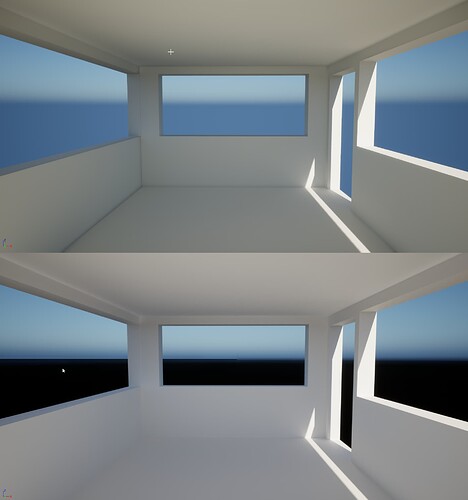 I tried to disable Screen Space Directional Occlusion but there’s barely any difference: 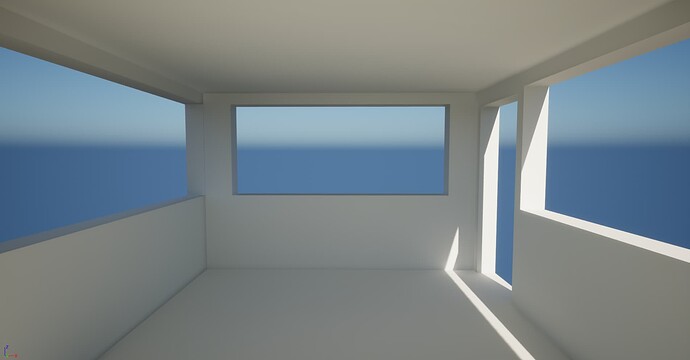 Is this just the way Lumen is? If there’s anything that can be done about it, I’d love to know.

I’m not understanding how the Lumen Reflections “Quality” setting is supposed to work. The tooltip says increasing the value is supposed to reduce noise. But it does not seem to be the case…

Using 5.1 with Lumen set to use hardware raytracing. The reflective material here is just a glossy mirror (albedo: 0.85, metal: 1.0, roughness: 0.2)

Anything above 4 isn’t worth using/trying. Increasing screen percentage/resolution helps a bit. light sources themselves are decently stable but anything emissive or reflections of that are pretty unstable.

Anything above 4 isn’t worth using/trying

Have you checked out the Lumen Team’s Siggraph presentation? Daniel Wright shared a link with me in the forums, and they also had a presentation on how ray-tracing large scenes works.

From what I’ve read and understood via the presentation and Github comments, they have already implemented perf. improvements for hardware lumen that didn’t make it into a few of the UE5 demos (Fortnite I don’t know about). It includes how they handle distant geometry via the far-field, how BVH trees are constructed and streamed, and a few other things. They did mention that that performance on PC may be improved when Unreal Engine gets bindless resources for ray-tracing, so there is room to go.

I agree with you that 4A’s implementation of RTGI in metro exodus is extremely competent. From what I’ve learned/played however, their system only robustly handles diffuse, opaque geometry; shinier, transparent, and alpha-masked geometry see limited or no support. Lumen trades performance for feature robustness in this case, but there’s nothing to say the tech couldn’t be made more scalable.

In terms of mixing SW/HW RT, I wouldn’t know the performance implications necessarily, but I’m curious what you see as the benefit. Lumen can hand off between different ray-tracing methods, so I suppose the performance would determine how useful it’d be.

For maximal tracing quality, you can always go lumen.screenprobegather.referencemode. It’s designed to match the path tracer by just cranking the ray count and disabling importance sampling, with generally good results.

Going off of the lumen team’s talk, the ‘AO-like shadows’ are their contact AO implementation to add some shadow resolve that lumen’s screen probe method can’t handle. There’s most likely a CVar to remove them, I wouldn’t know it off the top of my head alas.

I brought this to @Daniel_Wright’s attention, he mentioned that glossy reflection quality is a priority for them to fix. There are Cvars that let you raise/lower the roughness value of surfaces for lumen to trace better with, but that could mean a lot of art direction changes with legacy content.

I know they scrapped cone tracing for pipeline consistency/ technical issues, but I’m wondering if they’d consider bringing it back for SWRT. From all the lit. I’ve read, cone tracing can integrate varying roughnesses extremely well, and even the light leaking/over occlusion seems less distracting than the temporally-unstable fizzle.

t’s probably a CPU bottleneck due to this high amount of draw calls then.
Have you found what’s causing it? I’m actually pretty curious.
Might it be an issue with occlusion culling in VR when loading the night scene?
Did you try enable/disable Round Robin Occlusion to see if there’s any difference?

Soryy for the late reply - your post totally escaped my attention. I haven’t found the cause. Activating RRCulling doesn’t do anything. Just did a new test - some objects were added to the scene since my last post though;

Hoping 5.2 will come soon with some new improvements for Lumen & VR

Has anyone managed to get an ocean to reflect inside of Lumen reflections? (That is, one bounce with color instead of black.)

Even Epic’s water plug-in is not visible in reflections (though apparently you can enable them via a console command, which I wasn’t able to get working but Epic’s plug-in looks like Fortnite anyway and we need more realistic water).

Yes, one way is to use the Raytracing Switch in a highly reflective material to revert it to either a color or preferably some kind of environment map when calculating RT. I have a water example in a thread about this topic. I also have a YouTube video about it.

I took a peek but was having lots of unrelated issues with the project. I did render out a cubemap though and the dull metal doors looked great in the cube map. I’m pretty confident the technique would solve issues handily. Definitely. For movie renders, archvis and who knows, maybe even some real time cases having to jump through 100 hoops just to get an approximation of a second bounce is really pretty wild. Hopefully we get a bounce counter like in true RT. And also hopefully we can eventu… I believe in the current lumen implementation that it’s very difficult to impossible outside of screen-space. There’s no easy representation for the lumen scene to reflect water color correctly, especially considering how SingleLayerWater is made up of a lot of shader tricks and isn’t as physically based as other parts of the engine (laymen’s terms).

Theoretically, you could represent the ocean in software RT like this: Use the water height to drive a heightfield representation in the lumen scene (just like how landscapes are represented), with stochastic translucency to account for light partly reflecting off of and scattering into the water. That may even be something a tech artist could set up without programmer intervention, but it would certainly be a hack.

I don’t see an easy way to do anything for HWRT though: the densely, dynamically tesselating surface with constant movement would likely have massive BLAS update costs under the current lumen paradigm.

A while back in the lumen thread Daniel Wright mentioned the lumen team getting close to supporting a form of multibounce reflections with the radiance cache as fallback. While this isn’t quite the multi-bounce hit counter I think many of us wanted, it does serve to alleviate a bit of a content bottleneck in the form of no reflections being available in the lumen scene.

I love all of your hacks and strategies @BananableOffense , I think they’re an amazing asset in so many scenes and circumstances, but I also believe lumen having native support for these technologies without artist setup will be the key to seeing larger adoptation and freedom of workflow.

Having an issue with raytraced lighting popping in & out? (Bottom of the door frame) There’s some strange filament/solar flare looking rays coming from the door frame too. Any ideas what is causing this? I am new to UE so it’s most definately something I’ve done wrong but hoping for a solution as I can’t seem to figure it out.

Here you can see the flare like issue zoomed in.

I believe the first thing you’ll want to do is disable all post-processing effects, to eliminate the possibility of bokeh, bloom and/or lens flare causing the issue.

Assuming you’re using lumen (this is the lumen thread), then my guess as to what’s happening is that your mesh is emitting more light in the lumen scene (don’t know if it’s emissive or not) than the screen traces are recognizing. Thus, when the object becomes on-screen again, lumen decreases the amount of lighting.
Given how the flares appear and fade, it looks like some sort of temporal ghosting, which tends to happen when bright objects become occluded or revealed.

Does that help answer your question at all?