I installed the UE 5.0.0 version on my new M1 Mac (Big Sur 11.4), it runs smoothly, BUT Lumen does not work. I have no realtime GI, I get the usual pre-lumen “Lighting needs to be rebuild” messages. Lumen is activated in the project settings though.

Did is miss something? Is it not working on a M1 Mac?

Full Disclaimer. I am by far not an UE Pro *smiles

Hi, I have an M1 Max and I’m sure since your question was asked 6 months ago, you’re probably very aware now that Lumen, Nanite and Ray Tracing aren’t available for the M1 at this time (but really hoping they become available)

I’m not into game dev, just looking at virtual production for low-budget projects using pre-key’d green screen footage, so our use cases may be very different.

For me, options seem to be…

Hi @johnmichael ,
We’re in a similar boat. My plan is to be making short films on my Mac with UE. Right now I’ve just been doing tutorials to get up to speed technically. I’ve been using a MBP 16 Intel so I still have access to nanite and lumen. I’m waiting for native support for m1 with nanite and lumen before I upgrade but you presented a very interesting option I didn’t think of, to render on the cloud. How is it going for you? Have you done a project like this, working on the Mac and then letting irender output it for you through the cloud? I’m very interested in your workflow.

Hi, I took a bit of a breather from figuring out workarounds for Mac UE

I was leaning heavily towards just pulling awesome megascans into Blender for now, which is doable with the paid subscription to megascans, but then I realized (to my understanding anyway) that even with a paid megascans subscription, to legally use those assets in a project, final renders MUST be performed in UE… putting me right back at square one with Mac UE rendering challenges. Dolp!

Refreshed & ready to give the Mac UE-to-cloud PC idea a go in the next couple weeks though – will let you know how it goes! Or, if you beat me to it, please let me know how it worked for you! Cheers

Had no idea about the megascan issue with blender, good to know! Good luck with your next round with UE and M1, I hope you get it working. I’ll be eagerly watching from the sidelines. I’m still a super beginner, just hacking my way through the tutorials! 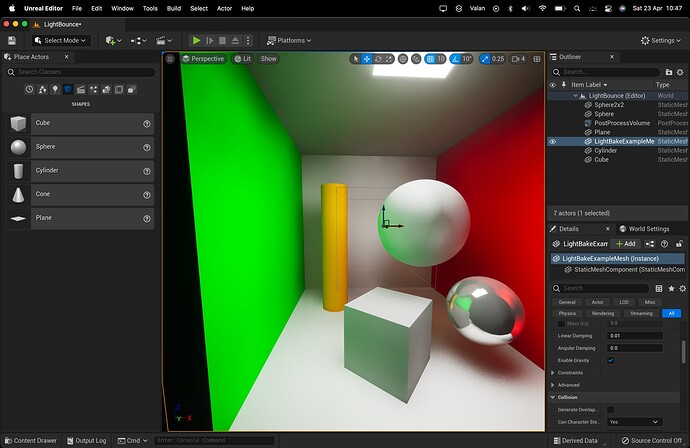 Fantastic! I honestly didn’t expect lumen to work on the Mac. My primary use for UE 5 is for short films so not having lumen or nanite wasn’t a deal breaker. Actually Ray Tracing works well with my experience with UE5 so far, so as long as I can watched it at a decent frame rate while creating, I can just let it all render when I’m done.