Lumen and Nanite for MacOS

Given that the beta of UE5 has created quite a stir, I was keen to jump and see if it was time to move away from Unity. One of my main reasons to use an engine is that I can very simply publish a game on multiple platforms - so I have pretty much the same code to produce a Steam distribution on Linux/Mac/Windows and the appropriate app stores for Android and iOS.

I use a Mac as my development machine. Over various iterations of my projects I can be pretty confident that the executables I make will just work (although I can use a VM if I need to test on Windows/Mac specifically)

However, the lack of Lumen or Nanite support on MacOS at this point has stopped me a bit dead. I was really interested to see how they performed and perhaps send a few test levels off to users to compare, but given that I can’t use them on my development platform - makes things a bit pointless to try.

It’s all just a bit vague at the moment. Lumin and Nanite support on Windows and Next gen consoles only at the moment. Is it possible to get some clarification on support for MacOS and Linux at least?

Bump. We have around 20+ Macs in our college lab running UE5 and it would be great to know if these features are coming to Mac at all! I personally have a Windows machine, but it would be a shame for so many people to miss out.

Be aware that while I would think they can make it work on Mac, most Macs do not have capable hardware, it would likely need a system with a good dedicated GPU or one of the higher end M1 Macs.
They also might not develop support for the Intel based Macs since Apple is moving to their own chips.

Ive just picked up a M1 Pro without knowing Lumen and Nanite are not available on Mac! Any official news on Mac support? Does the EPIC war with Apple have an impact on this?

Although I don’t want to speak for Unreal them selfs, but I might be able to shed some light on the issue, both Lumen and Nanite has hardware incompatibilities with the Apple own hardware… its not a performance thing its a code compatibility thing.

For example the Lumen uses path tracing to deal with light dynamics, and although the Mac hard can do it, its completely different architecture to the Nvidia and AMD, They would need to support Metal for starters…

For a very similar reason the base engine would not able able to use Apple Graphics for like Nvidia Cuda or AMD equivalent so they would need to use Metal once more, and combine the logic of the Apple Neural engine, plus graphics cores.

The real problem is not “can they do this” the real issue is it worth Building and Supporting a variant of the Unreal Engine to support these features with very few developers on the Mac to support it.
Also there is that little beaf with Apple over Fortnight and what not… on the side as well.

But that been said I am optimistic for this reason manly, a lot of mobile games, and more importantly cinema and new online projects are using more and more of Unreal Engine, and they all use Mac’s predominately. They won’t want to miss out on a market that is growing for them… so it might come out some time after the launch of Unreal Engine 5… but it will be supported eventually

Hope that helps and give some content… in short if you have project work… use something else in the mean time… unless you don’t need these two technologies, but cheep an eye out as I am sure it is coming.

Unreal already supports Metal, I don’t see the issue to be honest.

Clarity would be great with this one.
I would love (absolutely LOVE) if they came right out and said either of the following:

Either suits me. Then we’ll know where we stand and what to do. At the moment, we have nothing.

I know some of this isn’t their fault (Apples Nvidia embargo etc) but it has been absolutely infuriating waiting for updates on this sort of thing. It’s been the same with raytracing on UE4. A system requirements page, yes, but no word on Mac support- to my knowledge anyway. I’d be over the moon to be wrong on that.

I wouldn’t expect it any time soon, since UE5 is still in early access. If they would have to do a lot of development to support both Intel-based Macs and M1 then they might skip the Intel-based systems since they’re getting phased out. As for M1, the number of Unreal Engine users that have a capable M1 Mac is probably very low so it might just not be a priority.
But if they intend to support Mac then I’d expect it eventually as long as it’s possible.

I am also hoping support is coming. I’m currently using an Intel Mac with an AMD 6800 using an eGPU, and keep running into walls. It would be nice to be able to use some of these features, since, at least in theory, the hardware ought to be able to handle it.

We’re also desperately waiting for Lumen and Nanite support for our new m1 max (s). What’s most frustrating is the “unreal” silence in this respect. Is Epic not interested in the mac community? Can’t they share the UE5 roadmap, so that we can rest assured that this will indeed be supported? Unity is already running natively on macOS. Come on Epic, let us know when this will be available!

To all it may concern, it seems that at least Lumen is working on MacOS in Unreal 5 Preview 1 now!

My characteristic test of “is the darn thing even trying” is to make a small hallway and see if the realtime GI tries to fill things in - which it does! 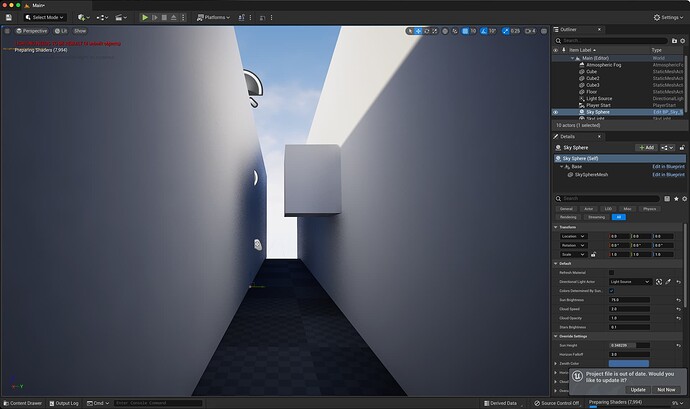 Now if anyone can help see if Nanite is on, that’d be great!

Note that I’m on a MacBook Pro with an AMD card, not M1, M1 Pro or Max or anything, just slow ol’ Intel and AMD

Lumen can be enabled and may work as it should now on mac. But when exporting with “render widget” it crashes if Lumen is on. Perhaps someone more familiar with the forums can report this to Epic staff so they know since lumen for rendering would be great use cases for Macs.

I can confirm that Nanites are not working for Macbooks yet.
Lumens however is, so there’s hope that eventually we’ll get nanite support for mac.
BTW not having it just stopped me from creating my indie game project.

which mac are you running?

I am not getting colors from material showing up on other materials like on PC. I made a simple red material and white and a single light (Lumen shows active in project settings) but zero red shows up onto the white. Light also is not bouncing around an unclosed room when I let light in. Maybe there is a setting I have off?

Same here. I’m going through the First Hour in UE5 tutorial as a quick orientation. In the “Working With Visuals” section they have you turn Lumen on and off in Project Settings to see the effect of a coloured window frame bouncing light onto the wall. Either way you toggle it there’s no colour bounce.

Also baking lightmaps is not working for me. Also crashes.