I just wanted to know if we are supposed to be able to use the menu item when we work from a windows machine. We are able to build packages just fine using a remote build machine for iOS and we can manually use iTunes and update the package. My question though is if the Launch on iOS device is supposed to work in this case. It seems to go through the normal remote build operations but ultimately fails. Here are the details:

So that is an error trying to load the iTunesMobileDevice.dll in to the process space. That is the dll from iTunes 11 and earlier. The program detected that as the valid iTunes install from your registry entries. Do you have iTunes 11 or iTunes 12 installed?

And it should work either way, but the bad image format tells me we are trying to load an x64 format dll in to an x86 format program. This may be due to an iTunes detection mismatch.

Ah, ok well then that’s the problem. So my guess is that when you upgraded from 11 to 12 the old registry entry is still there. You could try re-installing 12 or you can look for a registry entry called HKEY_LOCAL_MACHINE\SOFTWARE\Wow6432Node\Apple Inc.\Apple Mobile Device Support\Shared\iTunesMobileDeviceDLL, if that exists go to where it points and rename the iTunesMobileDevice.dll to iTunesMobileDeviceTemp.dll and verify everything works. I will put in a fix for this for an upcoming hot fix where I favor iTunes 12 over iTunes 11 (currently it is flipped).

That’s correct on PC. On PC we don’t have a way to launch the actual programmatically. So you still have to manually launch it on your device, but you don’t have to go through iTunes to install.

That was exactly it. I actually did this and tested it just prior to you suggesting it since I remembered that hotfix. So, now it gets further but stops here:

OK. So is there a way to see any output log when I manually launch it after that?

Not yet. I am working on something for that as we can get a connection to the device. It will be available in a future release.

You can also pull logs off the device utilizing the iPhonePackager program in Engine/Binaries/DotNET/iOS directory. I will be pulling that functionality in to the editor in a future release as well.

Awesome. Thank you so much for the information!

I see documentation on how to do a Backup documents… but it looks like you can’t do this unless you are running it on a mac as well correct?

No, you can do it from IPhonePackager, there is an advanced tools tab where you would then select Other Deployment Tools. On that dialog, select your device and then select Backup documents. It will ask you to select the IPA with the Bundle Identifier for the app you want to back up and then it will copy the data back from the device.

Did you try it after the iTunes re-install? It uses the same program to connect and copy from the device, so it probably was affected by the same issue of finding the wrong dll to use.

I never reinstalled iTunes. I just removed the the invalid registry key and restarted the UnrealEditor and that cleared up my last error. I did that all before launching the iPhonePackager for the log retrieval.

ok, when you run it, there should be a DOS window in the background. When you go to the Other Deployment Tools panel, what output shows up in the DOS window?

So, you don’t need to rebuild unless you want to get a fix. It turns out my fix for connecting to devices from standalone IPP was not integrated to 4.7, so that is why it is not working. If you have GitHUB access to main branch, get change 2432273. That fixes this problem and will allow you to get the logs on PC. You should only need to rebuild the DeploymentServer.

It couldn’t connect to the device. I will show you everything as soon as I can. I’m rebuilding w/the latest 4.7.1 source at the moment. It will probably be another hour =) Thank you so much for helping. These indentations are becoming quite large! =) You guys should have something local in Raleigh for developers to come talk w/you all. I’m right up the street on Six Forks!

So how do you easily find the gitHub commit so I can merge it into my local branch? All I have is your 2432273 # but searching for that doesn’t yield any results. I know I can look for it manually but is there an easier way? There are a lot of commits!

btw, I found a commit with my username on it (psauerbrei72) and from there just had it show me all commits I have made and looked through them. I couldn’t find a good search criteria either.

Here is the error I’m getting. I’ll let you know if my source was not updated properly but I just rebuilt w/the requested changes. 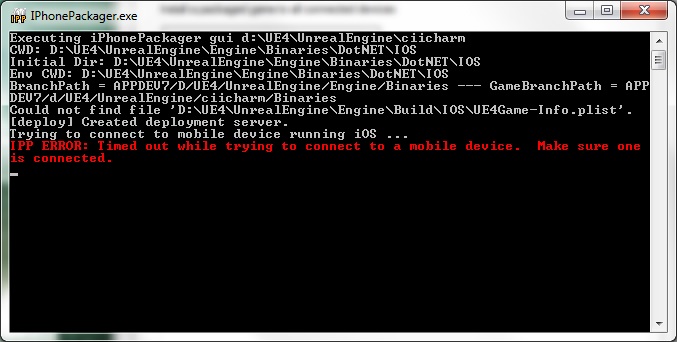