Shortly after parking your van at the curb, your partner gets out and makes his way to the mansion up the hill. You fire up your Zeus 2000i and begin scanning the airwaves for the target AP. A slight grin begins to form at the corner of your mouth when your favorite three letters appear next to the SSID: “WEP”.

Attempting a connection to TCP 8443 returned an error with a helpful piece of information - Navajo 0.17.2a. A quick search through the exploit database returned multiple hits for Navajo web servers including an authentication bypass exploit for that release…

This will be the first of a multi-part series on Klepto’s hacking gameplay. We will cover the in-game OS and other gameplay elements at a later date. 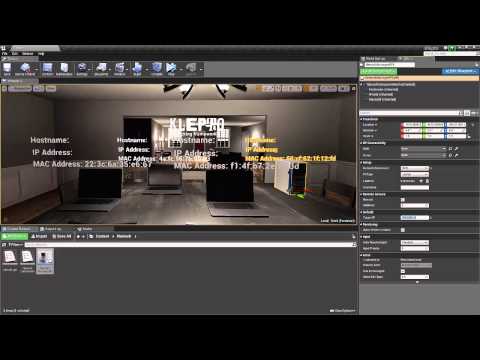 Hacking gameplay is unlocked when the player advances to The Professional skill tier. In addition to gameplay, several new high-tech upgrades are unlocked for the player’s vehicle allowing them to eventually upgrade to a mobile command center.

Hacking will come into play for various reasons including bypassing security systems, overriding surveillance systems and hijacking home automation systems. Additionally, there will be multiple mission opportunities from Contacts that involve obtaining or planting files on target PCs.

We will not be masking a puzzle mini-game under the label of hacking but instead approaching it as a simulation with a few entertainment stretches. To do this, we are implementing both a network simulator and a simulated operating system inspired by Kali Linux.

Players will have the option of automated tools and scripts that are easy to use for new players but lack the speed and flexibility of the manual work. For the Interested players, an opportunity to dive deeper into the game mechanics to gain access to otherwise limited functionality will be available.

We are simulating a variety of network functions to keep the gameplay realistic and dynamic. Watch this week’s Dev Video for a closer look. 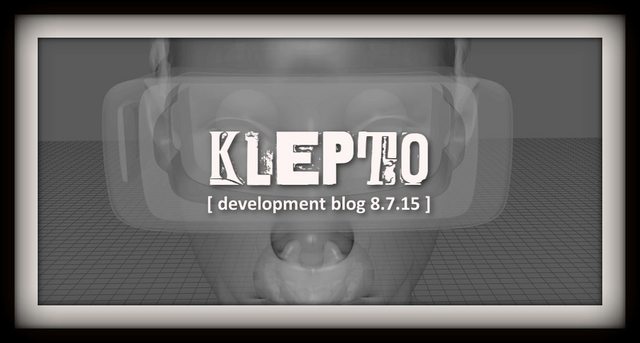 Lots of work this week on the multiplayer code. Here’s some footage from our first co-op multiplayer session. 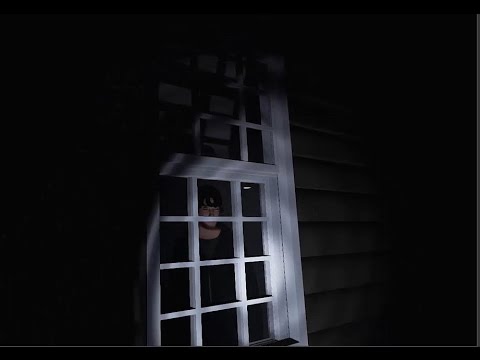 Logan completed the first track of the game’s score. Listen to the music and his sound design work in our recently released trailer. 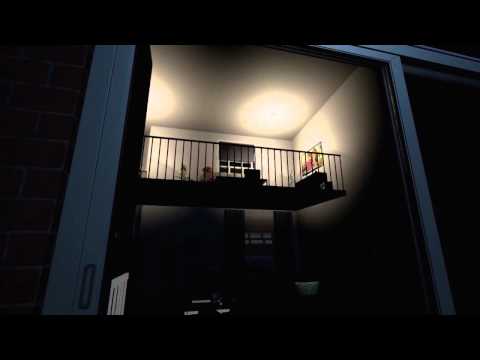 Alex and Nate finished up the police car this week. 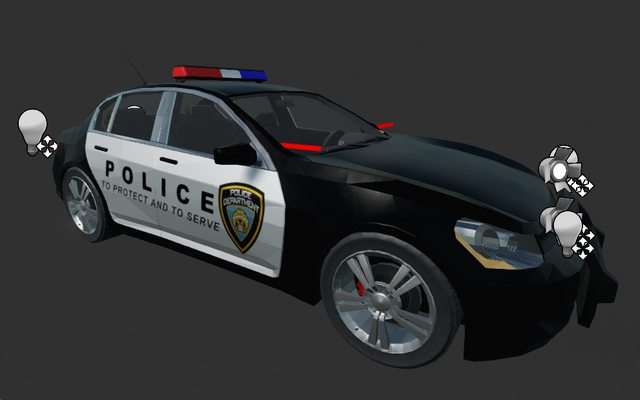 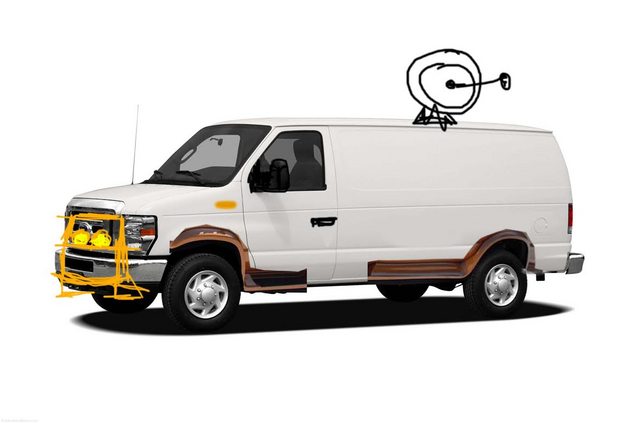 Dmitriy completed another piece of furniture with plenty of places to store potential loot. 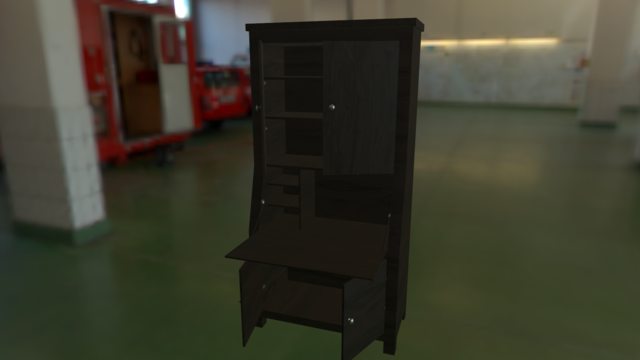 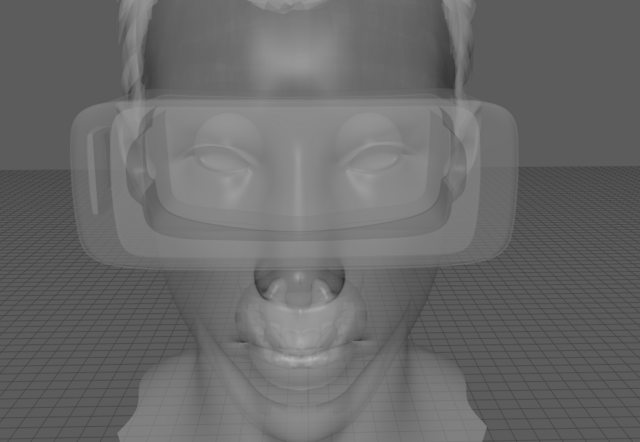 You havent had any updates lately

You havent had any updates lately

Sorry, all. I’ve been slacking on getting the updates distributed to the various locations. Rest assured, pace of development has not slowed (quite the opposite, actually). Here’s what’s been going on in development since my last post (click on the pictures for more details). 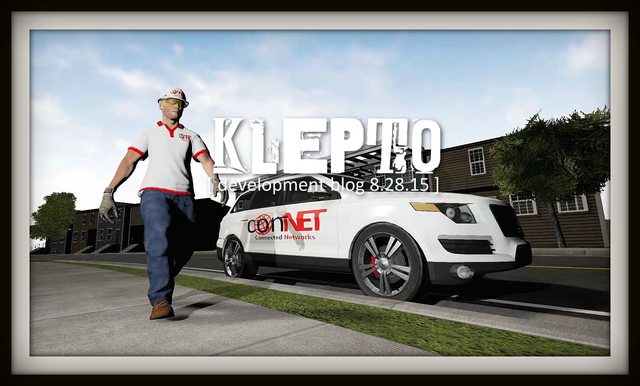 Things are ramping up in preparation for next week’s Steam Greenlight launch. The primary focus this week has been recording footage for the Greenlight trailer and gameplay videos. We’re also finishing up the KleptoGame.com website and designing some apparel with TeeSpring including Klepto hoodies. 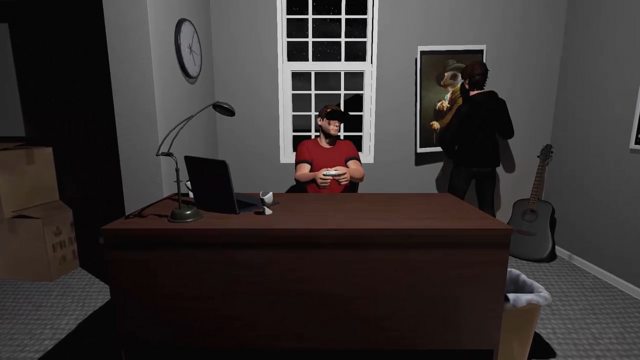 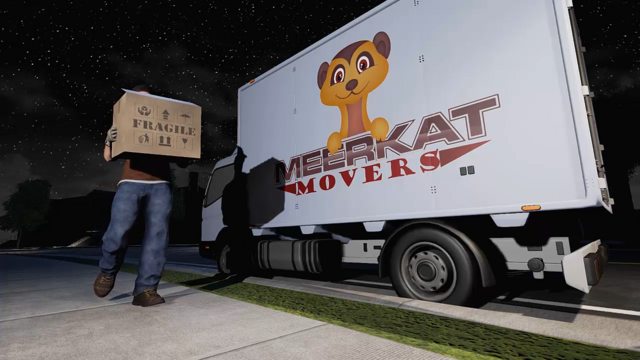 Additional work on the functionality side has been completed for the disguise mechanics. 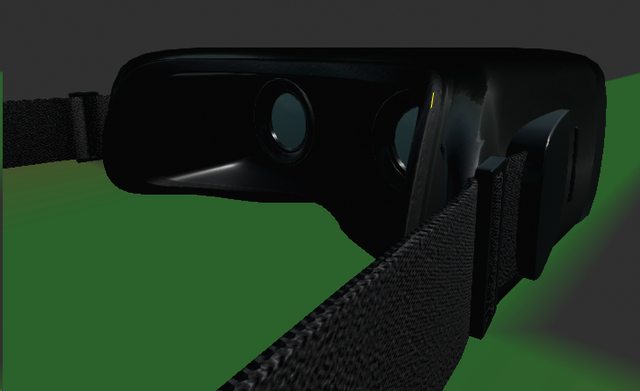 The art team is still churning out new assets and polishing current ones. 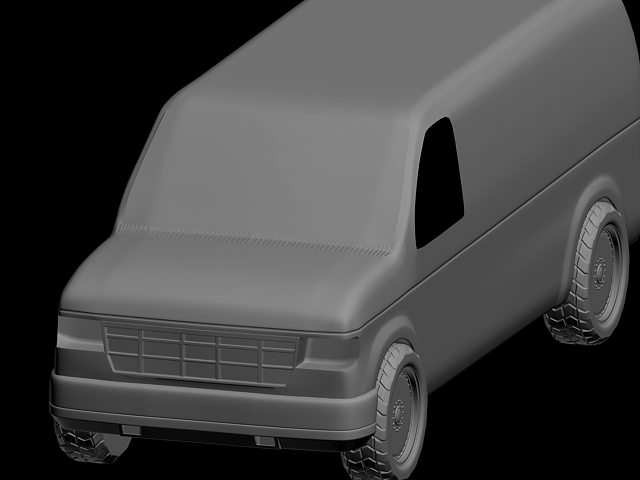 Sorry to keep it so brief this week but I’ve got to get back to work on the trailer or Nate’s going to start docking my pay. Although, I don’t think I can get much lower than $0.00, can I?

What a cool concept for a game. I’m looking forward to this game a lot!

Here’s a teaser screenshot from the upcoming Greenlight trailer: 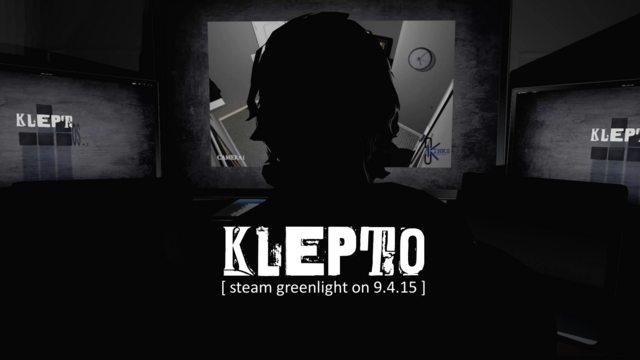 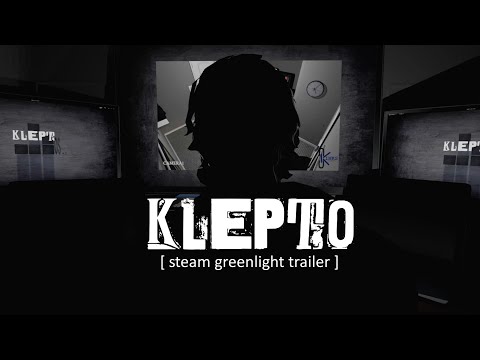 We’ve just launched our Steam Greenlight campaign. Be sure to check it out and show your support by casting a vote. We’ve also posted a new trailer (above). We hope you enjoy it!

We had a great launch day and off to a good start for our second day on Greenlight. We’re over halfway there so keep those votes coming!

We just finished up Day 1 on Steam Greenlight. My poor F5 key… 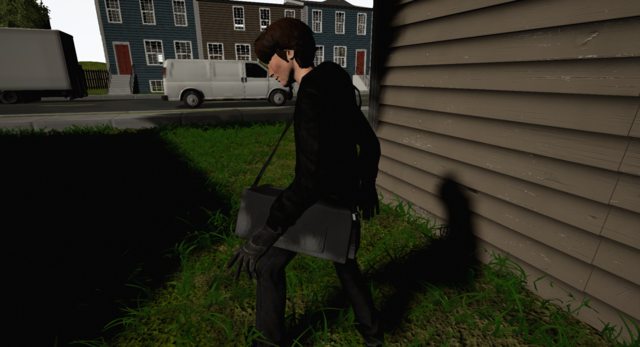 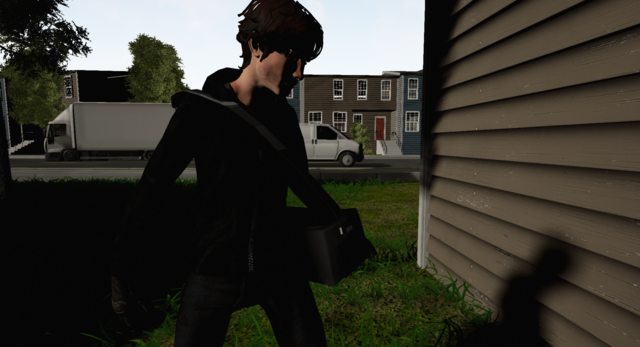 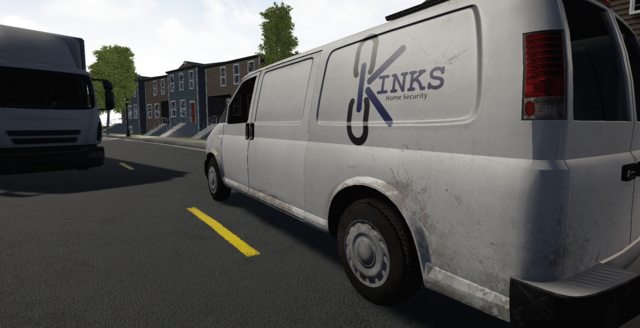 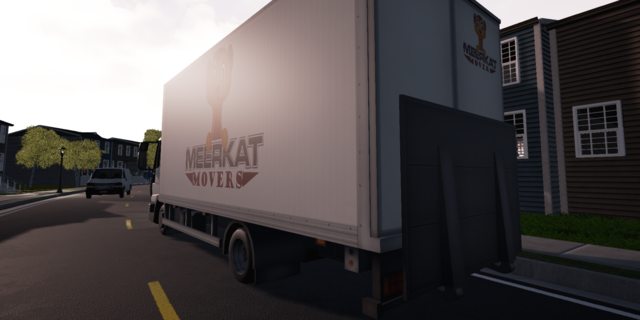 We’re a week into our Greenlight campaign for Klepto and so far we’ve made it up to #27 in the top 100! We’d love to get the community’s support to help continue pushing us up to the top 10! If you have a moment please check out our Greenlight page and give us a vote!

I quite like the idea of this, im a fan of stealth games

We’ve posted an update detailing Klepto’s multiplayer gameplay. Be sure to check it out and comment with your feedback and questions.

Klepto has just been greenlit on Steam. Thank you everyone who voted! 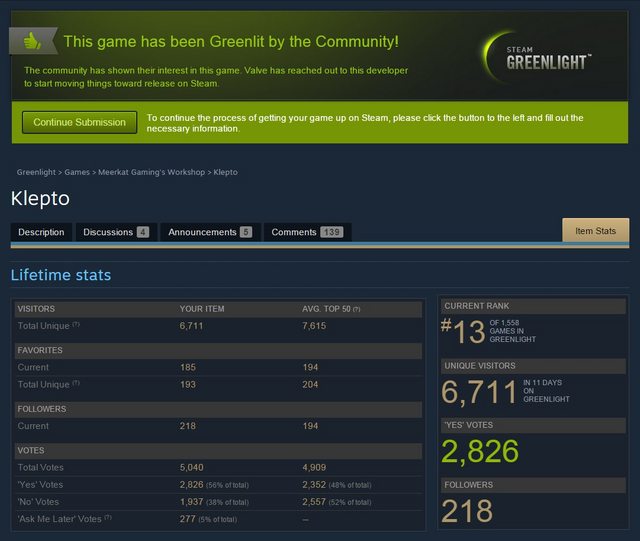 Thanks! Now I can finally stop mashing F5 on our stats page and get back to developing

Actually, could you give some advice on how to tackle getting greenlit? For example, did you contact media outlets, YouTubers, etc? Where did most of your Web traffic come from? The answers don’t have to be long, but I think any advice you say benefit the community immensely. Also, congratulations!

Actually, could you give some advice on how to tackle getting greenlit? For example, did you contact media outlets, YouTubers, etc? Where did most of your Web traffic come from? The answers don’t have to be long, but I think any advice you say benefit the community immensely. Also, congratulations!

A majority of our traffic originated on Steam. The night before our campaign launch, we sent out a press release with the Steam Greenlight url. This was picked up by a couple of sources. I’m not 100% sure how many votes that helped with but an important step regardless. On day 5, we posted to a Reddit. We intentionally waited a couple of days in an attempt to rebound the expected traffic decline. This seemed to really pay off. You can see the spike on Tuesday from those posts followed by a pretty consistent amount of traffic following. We did our best to humanize our posts. We didn’t want to come off as some faceless unknown company but instead approached them as ourselves, the developers.

Regarding social media, we mainly just used Twitter. All of our posts contained a new screenshot, link to the greenlight page and the #indiedev and #gamedev hashtags (also #screenshotsaturday on Saturday posts). We also stayed very active on the Greenlight page with announcements, discussion posts and comment responses. We didn’t approach any YouTubers b/c we didnt have a press release to distribute at the time.

I’m not an expert at marketing. I hope we can one day have someone dedicated to this task on our team because this ended up being a lot more time consuming than I anticipated and cut into a lot of my development time. It’s a relief that the campaign has finished and I can focus more on dev work. However, we still have to maintain interest for the next several months while we finish the game. Speaking of which, our latest Dev Blog has just been posted!