Hey I’m submitting this one… called “Fire in the Hole” 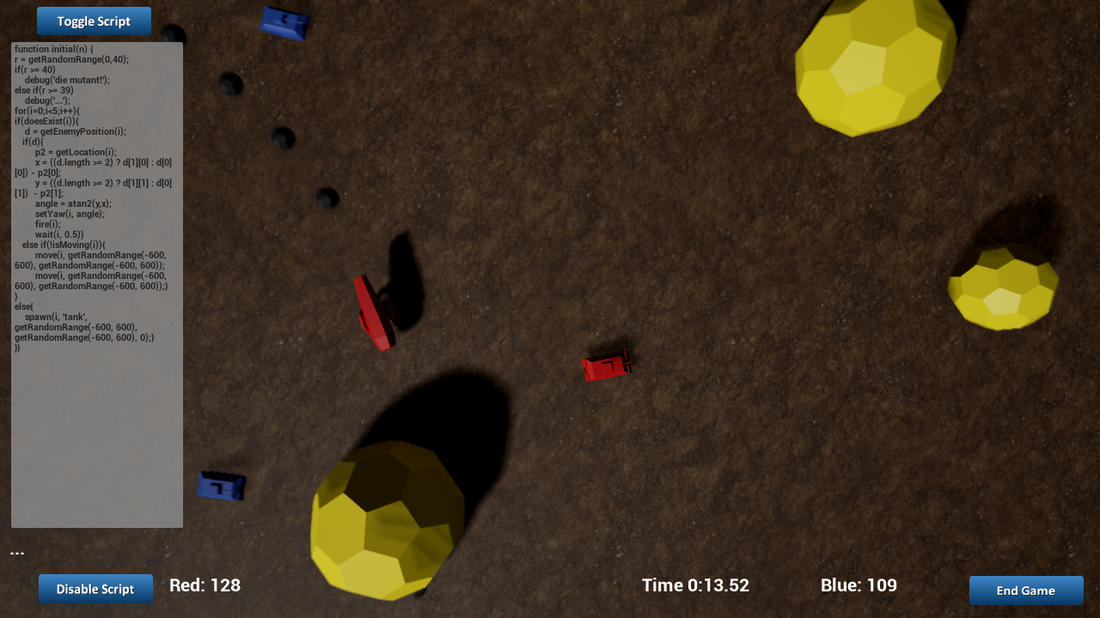 It is a cloud enabled game where you write javascript to control your forces. But don’t worry there are two training levels. If you get past this, you get to share your script for others to battle against.

assets used: duktape javascript engine, everything else fresh for the game.

This is way after submission, but I though people might be interested in my blockly integration PoC… 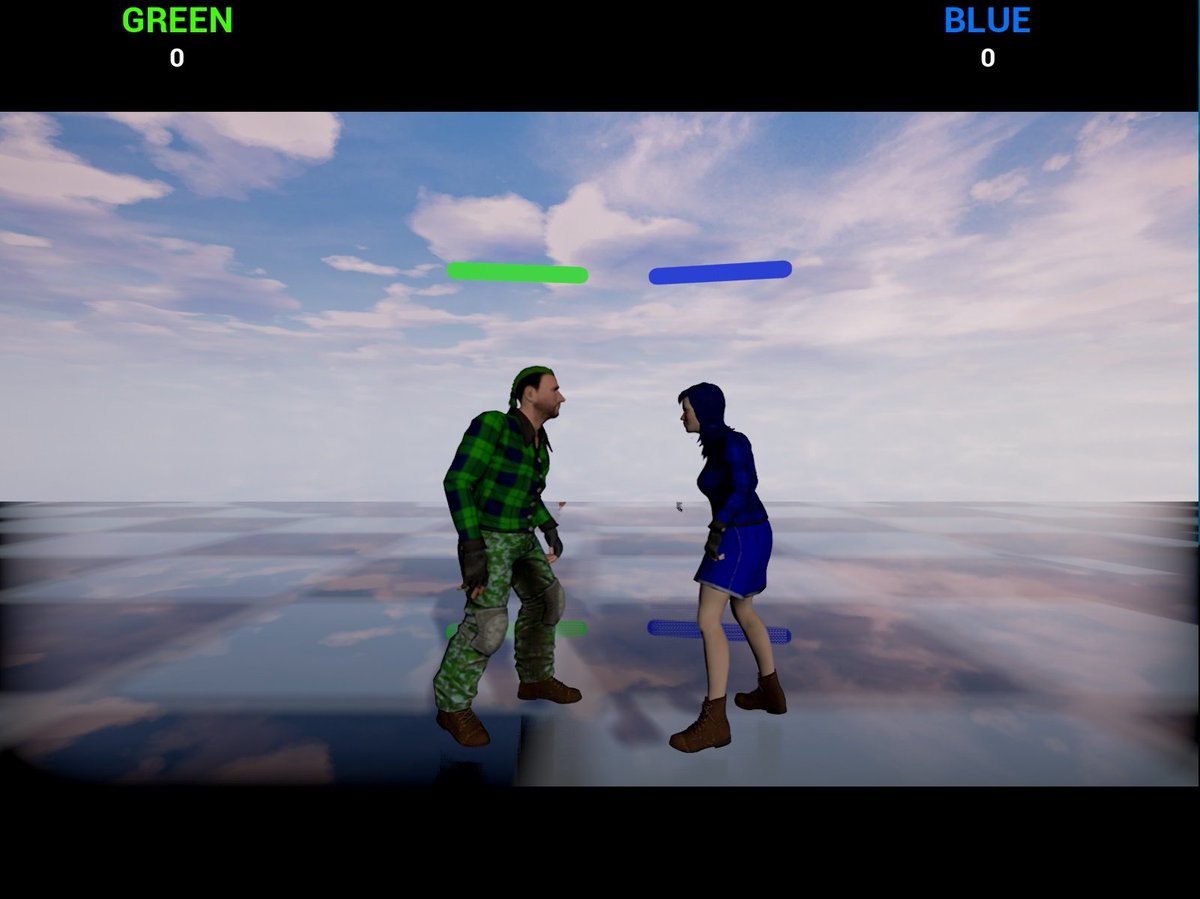 You are trapped in a hole in the ground and must keep the fire alive for as long as possible. How long can you last? 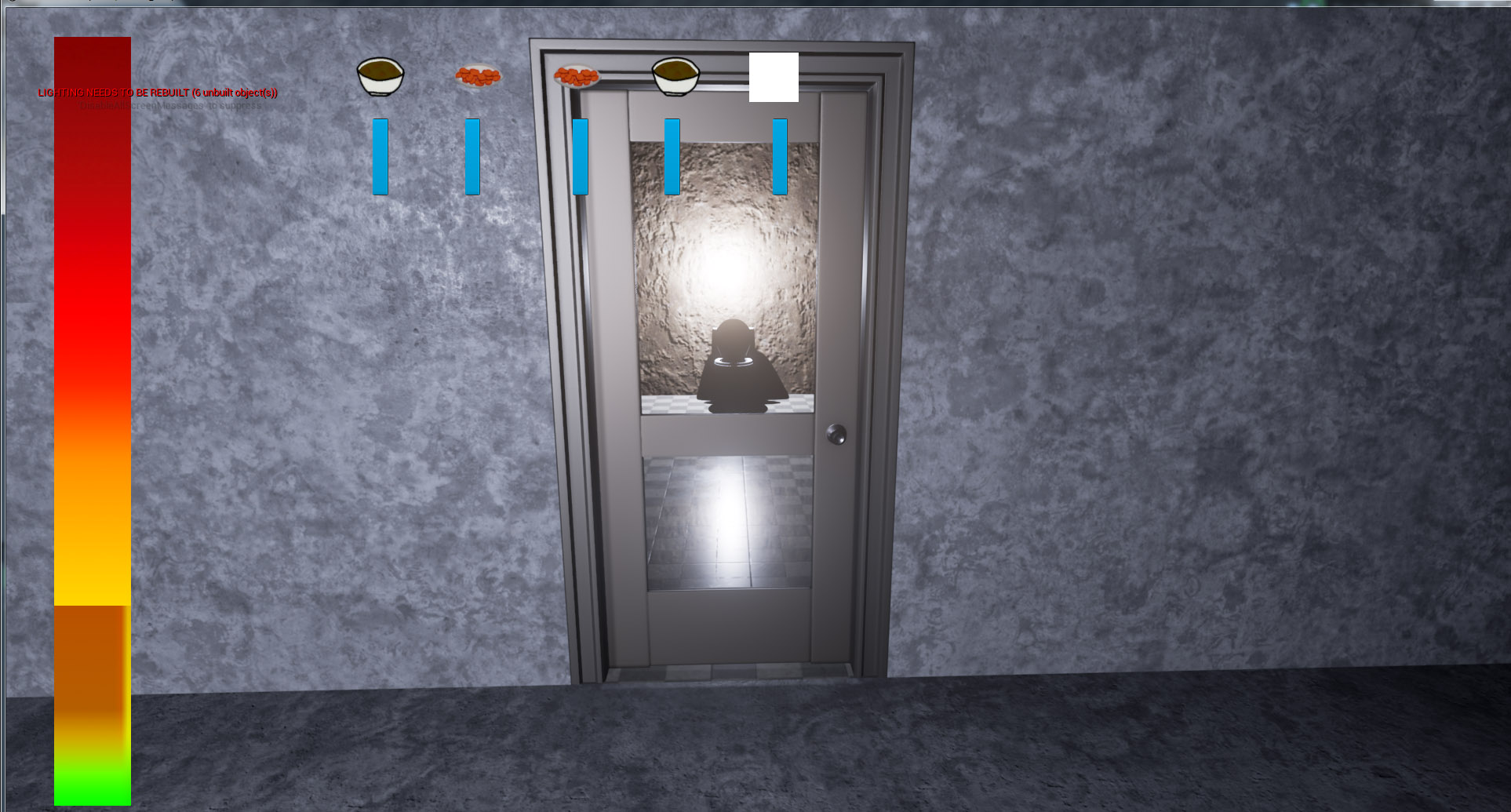 Edit: Game can be seen in https://www.twitch.tv/awesomeallar/v/73466120?t=04h13m22s
And in reply to Allar; yeah I wanted to do more with the game. The properties of the food is a “Potency” and a “Duration” variable, so eating a hot dog will increase the meter by around 5% over 8 seconds and a brown stew will increase it with around 20% over 15 seconds for an example. Initially I planned on having features to add a hot sauce to add potency to an item and a glass of milk to remove the most recently added item, but I sort of hit a wall while trying to make a save game + high score system. Which also didn’t give me any time to fix the scoring system (which was suppose to subtract the “bowel upsetfullness”-meter while adding to the score at that rate that would allow you to “overeat” as long as you made it to the toilet in time, for a higher score).
I’m not pleased by the way the game turned out, but I’m very happy with how much I got done on what little free time I was able to spend on making it. Working on a deadline was fun but horrible at the same time and I learned a lot!

My 2nd game ever btw.

Theme: Fire in the Hole 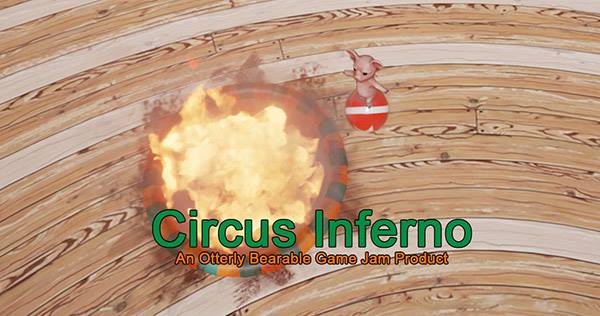 Manage your Circus Pigs while trying to avoid getting burnt to crispy bacon!

Description:
You have to keep swapping between the pigs to try to avoid them rolling into the holes filled with fire.
Currently you can not win, just try to keep them all alive as long as you can

Disclaimer:
This was our first Game Jam so we werent entirely sure about how much we could do with the limited timetable and as a result we were a bit overambitious at the start. It was meant to be a multiplayer game where you try to knock each other down into the hole, but since we couldnt get multiplayer function to work nicely enough we scrapped that idea and last-minute adapted it to singleplayer “survival”.

about:
You Control an airplane (ok it’s just a wing without cockpit so you could technically call it a drone :)) and try to take down as much AA units as you can before drowning in flames.
Have fun and don’t hesitate to suggest modifications or report bugs

You find the game HERE

Description:
This is a simple golf/cannon shooting game. The goal of game is to put the cannonball in the hole with fewest possible shots.

Fire in the whole… forrest by OneManBand

Fire in the whole… forrest by OneManBand

This i my 2nd attempt at UE4 jam, more of a game this time.
All game’s assets (except 2 textures and SFX downloaded from Freesound.org) and BP’s made in 2 days.
I strongly suggest starting with tutorial enabled.
Team: Just me.

Good luck to all of you!

Escape the underworld as a marshmallow in Burning Man! 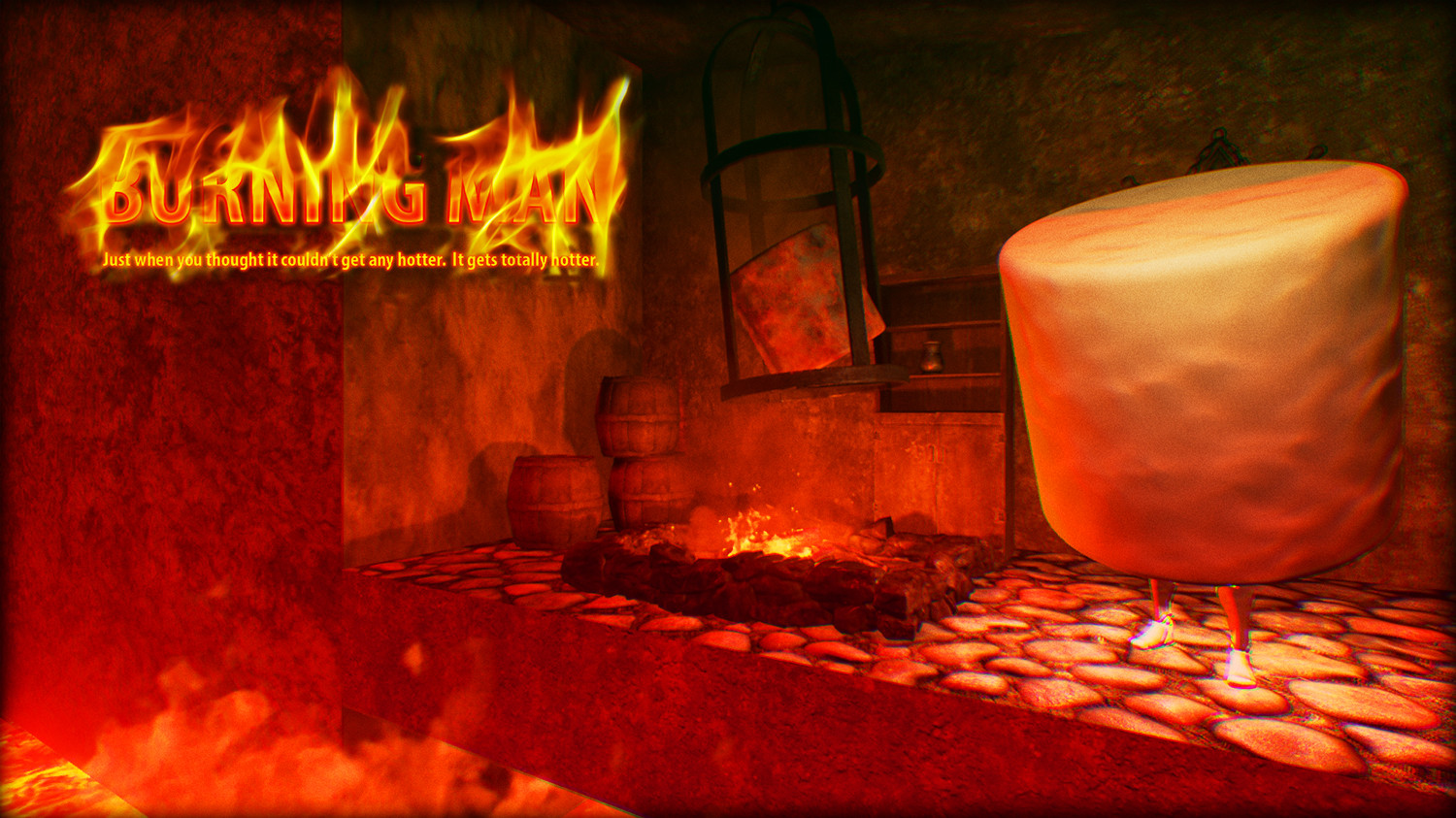 Name of your submission
SpaceBear_BurningMan

We are the Paloupe Team and for our first attempts on the Unreal Engine , we give you Grenade Jump !
The purpose of the game is … go through each level, solving problems with your grenade launcher.
Shoot valves, do some rocket jump might help !
Don’t forget to use geometry with grenades to hit well hidden targets.

Enilak - Real Beginner, never programmed anything in his life !
Semche - Beginner with Unreal Engine.
Rinchon - Me ! Who cares ?

Epic Games for their wonderful Engine and the awesome games they made throughout the past decades.
Fred82 for the link we found at the last minutes for the musics

Enilak for sharing his voice for level transition.
Semche for lending his awesome shower to catch sound.
Redbull for helping me keep going and catch the noise of a flick on the side.
Of course pizza’s and stuff too ! 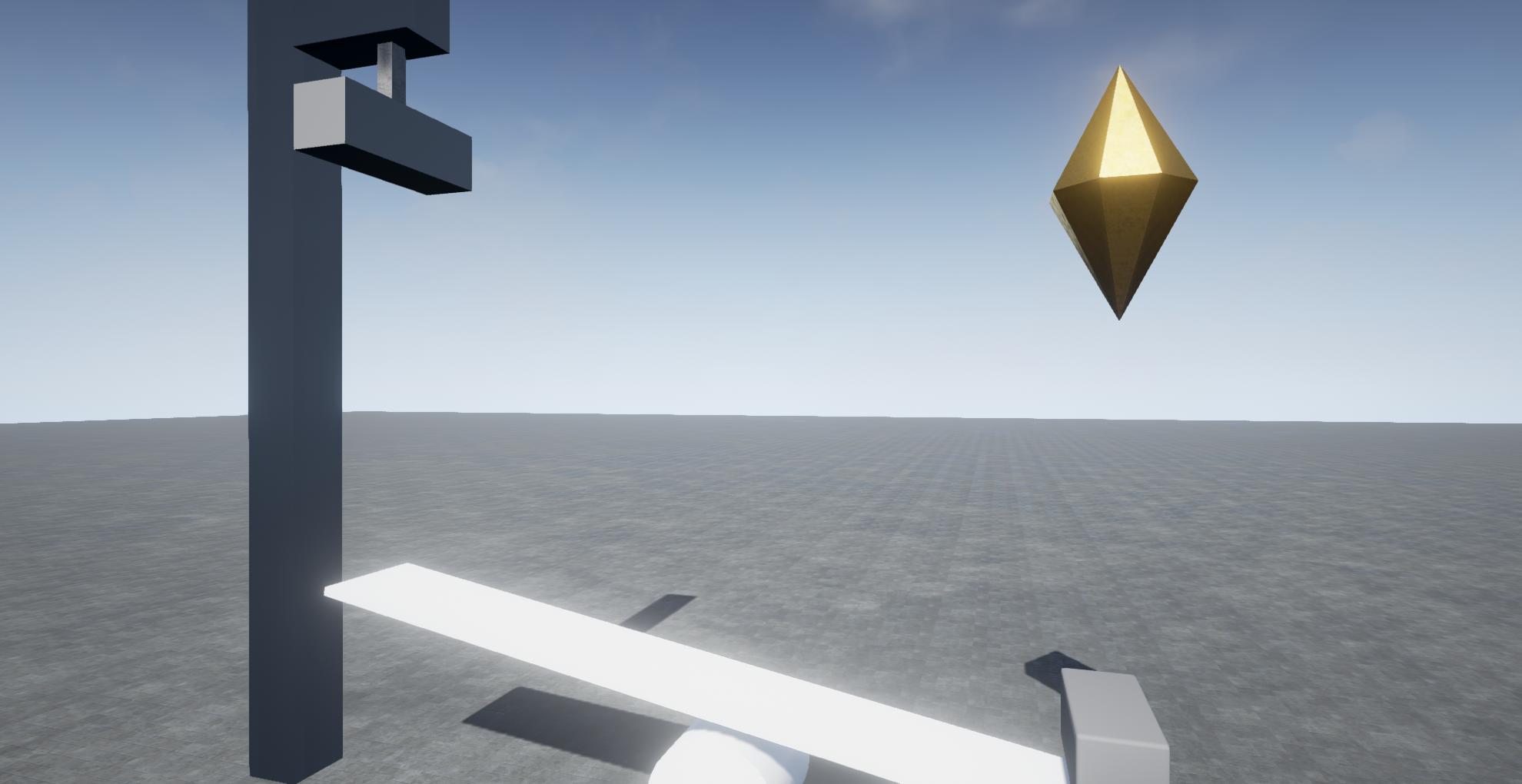 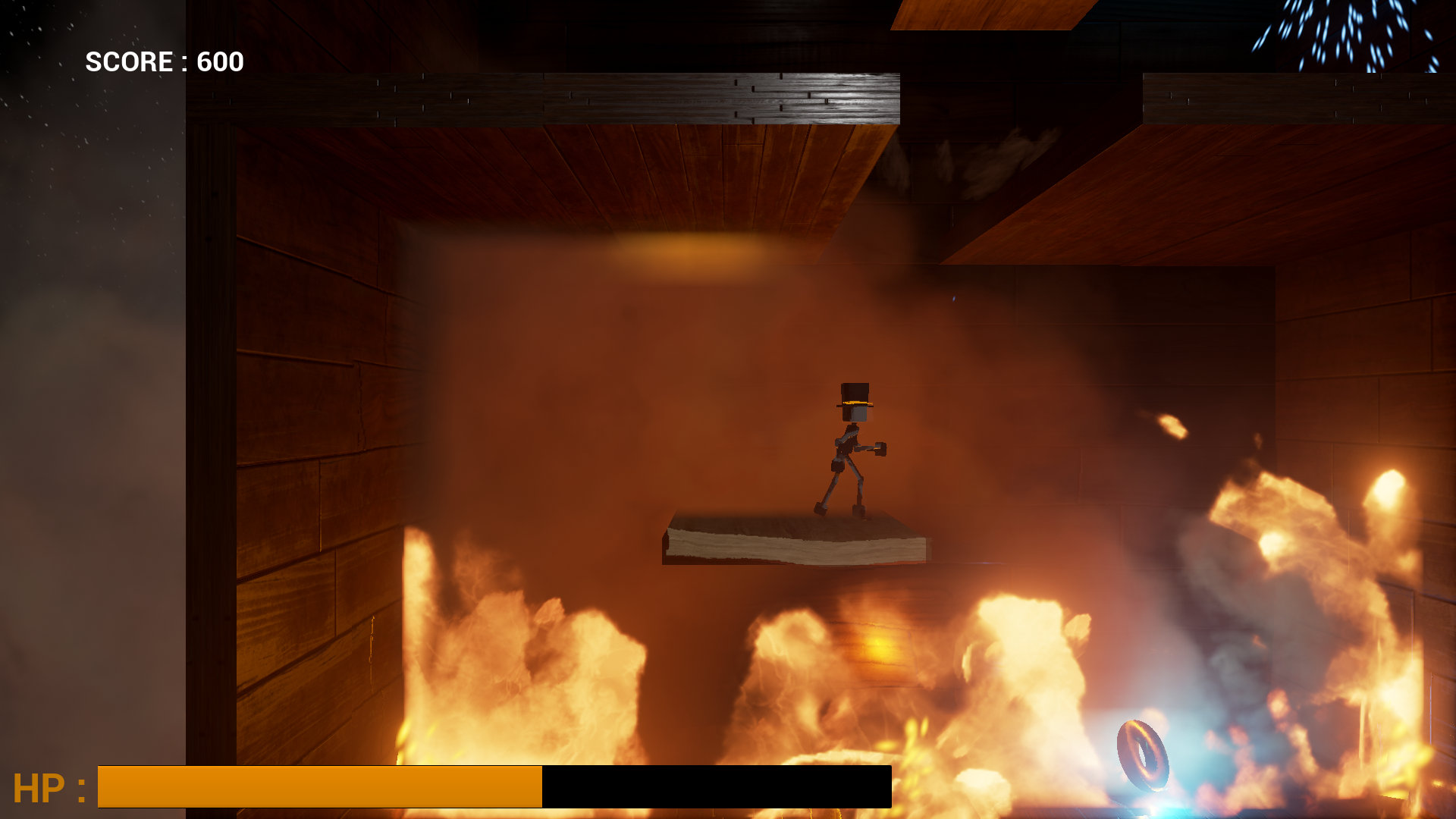 My first game! And my first games jam!
Game (if its can be so called) title is: Fire in the hole

Download link: https://1drv.ms/u/s!Ap2K67ttaX-IiLhHbapKPyWmZLd_mQ
I hope you will enjoy with this game 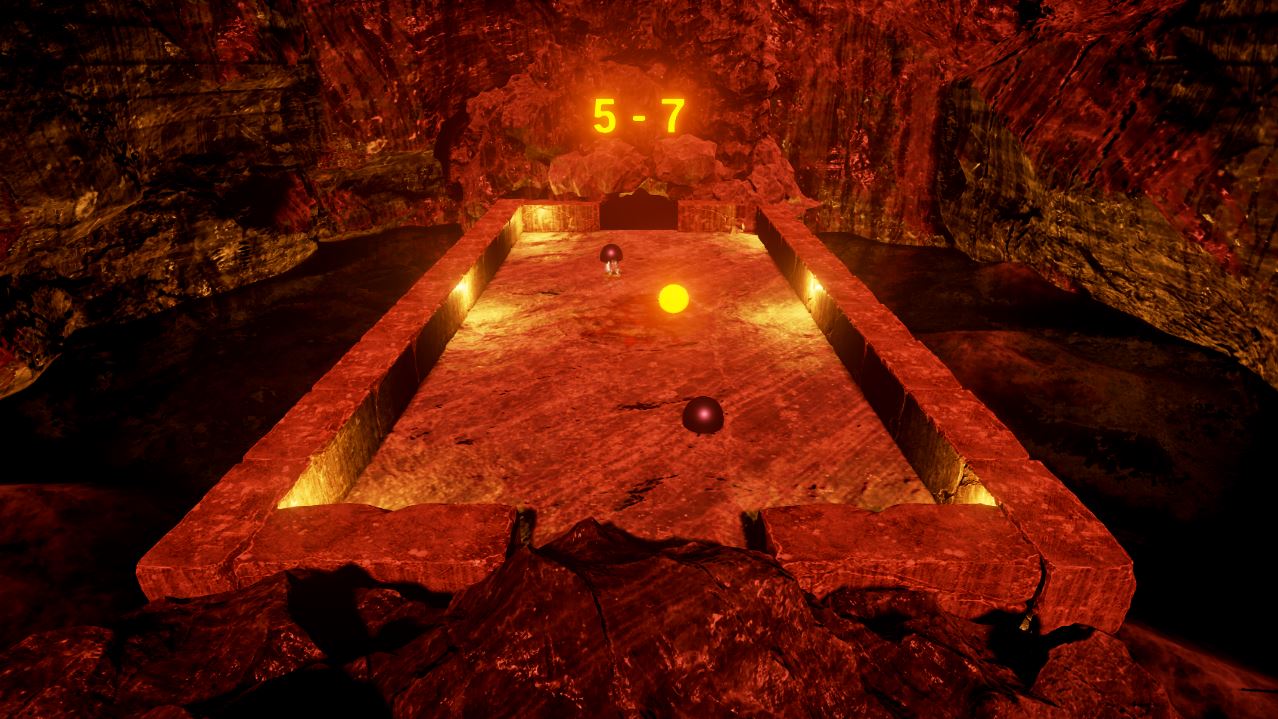 Don’t get your fingers burned :rolleyes:

A game where you fight hot chillies with milk to survive the heat.
Standard FPS controls in-game. (LMB, RMB, WASD, Spacebar)
Console is open so you can cheat if it’s too hard.