I’m a newbie in Unreal Engine,
I have purchased an unreal engine environment, which comes lighted by default (Cartoon House Vol. 1 - Ground Floor in Environments - UE Marketplace)
The issue is when I move things around, and try to rebuild, darkish spots appear everywhere, most noticeable at the corners of the furniture or walls, where the least light gets, on the other hand, the lighting overall is super bright compared to the original lighting. The screenshot below is on the preview lighting build quality, but even when I up to Production, it’s the same problem…

I have tried fiddling around with parameters, notably the Force no precomputed lighting, and all the parameters under Lightmass settings…

EDIT (added after ClockworkOcean’s comment below): another error I get is ‘‘lightmap UV’s are overlapping by 94%’’, this is why I tried turning on and off the force no precomputed lighting in an attempt to force light rebuilding from scratch, as per suggested in some online forums. Note that editing the original Maya (or whatever software that was used) is not an option because I bought this environment from a third party and I don’t have access to the original files!

Screenshot before I rebuild: 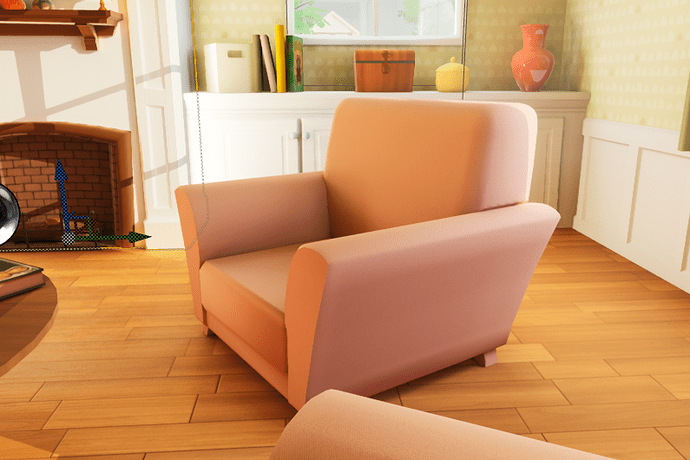 Screenshot after I rebuild: 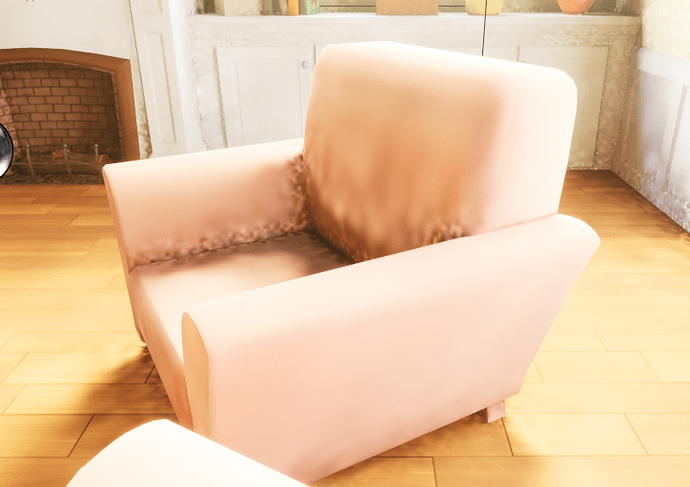 Thanks for your reply! actually, I did forget to mention something (which I have only just appended to my post above):
Another error I get is ‘‘lightmap UV’s are overlapping by 94%’’, this is why I tried turning on and off the force no precomputed lighting (along with an engine restart and rebuild) in an attempt to force light rebuilding from scratch, as per suggested in some online forums. Note that editing the original UV’s in Maya (or whatever software that was used) is not an option because I bought this environment from a third party and I don’t have access to the original files!

I’m using this environment in my short movie, so the quality of the render is of the biggest importance to me, even if it means longer building times!

Thank you for pinging makigirl!

So you either need to move to moveable lights, or tweak the parameters.

Performance wise you can easily use moveable lights here, the only downside, is the shadows aren’t quite as good.

If you want to tweak the parameters, it time to call: @makigirl !

Ok, as long as it’s clear that ‘force no precompute’ will kill all of your static lighting.

You can get UE to rebuild the lightmaps from the UV maps, see this:

Thank you for the link!

a bit complex for me to understand, but in case I can’t get my lightmap-settings tweaking to work (I’ll be replying to makigirl’s reply below), I’ll definitely get down to it!

Hey Makigirl, thanks for your reply! This scene does have a particular charm to me so I’m up for the challenge of making it work for me!

Please find attached the parameters settings along with a new before/after screenshot because I didn’t save the settings corresponding to the screenshots of my original post (I had tweaked the lightmass settings but not saved them)!

PS: the rig on the left is imported via alembic cache, it’s meant to move about, so I suppose it has to have dynamic lighting, I’ll get to that later after I’ve resolved the static lights of the environment first!
Thank you in advance for your assistance!alt text 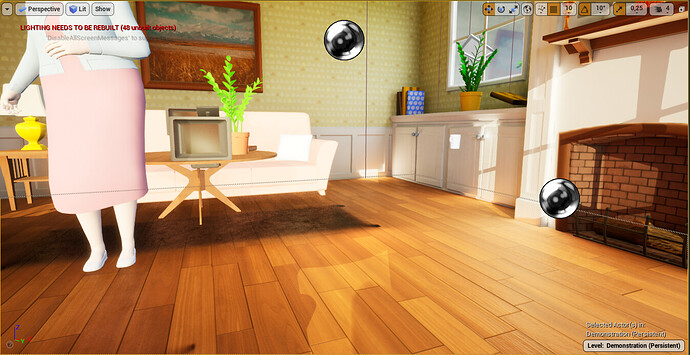 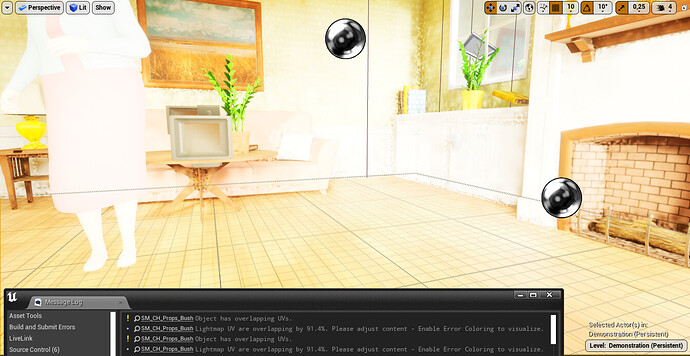 …I used to help the person who put this scene together!!

Hi!
Just to be sure (who knows what things you’ve changed along the way…) try with a fresh new scene with the downloaded content!
Under lightmass leave everything as on the screenshot BUT change Num Indirect Lighting Bounces from 100 to 10 same for the Num Sky Lighting Bounces (from 4 to 10)! Indirect Lighting Quality to 6 or 8 (10 is too much in my opinion and this is the setting that will raise the building time by a LOT but also this is the setting that produces more and more samples and makes your render cleaner!!)
If you want more detailed and accurate shadows go with 0.6 with Indirect Lighting Smoothness (higher number will blur your lighting details more and more!!)

…you need to build it on medium or higher settings!! Preview won’t do! 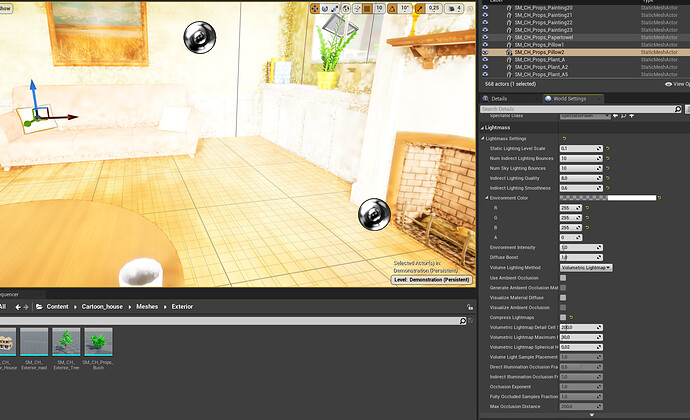 Hello! thank you for the reply! unfortunately not much has changed even though I used a fresh scene, as you can see on the screenshot…

Exposure… It’s just settings in Post Process volume!! You can go lower with the exposure or place your own LUT file to have the desired look! /I just played a bit with your image in Photoshop and this is my result… but if you can tune down the exposure on your side it will look a lot better, not so burnt out!

You can speed up the rendering time by lowering drastically the lightmap resolutions on the meshes that won’t be visible!! …or make them not visible in the scene + turn off their cast shadow option! 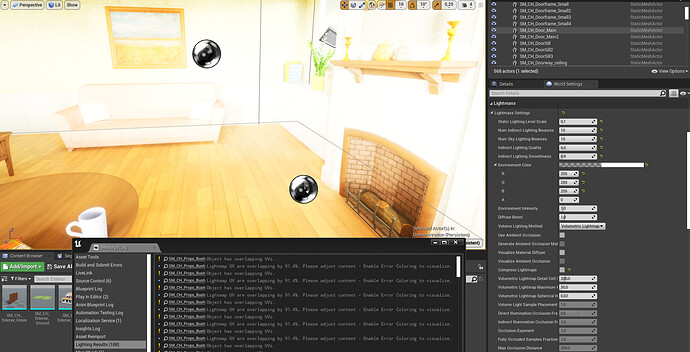 Hello, thank you! the patches have improved drastically, but I feel the scene is overexposed. What can I do with that?

Note that this is on Medium quality, and it took a solid 1 hour to build lights only, I had tried on Production and on High, and after the initial 30 minutes or so, it hadn’t moved past the 0% and 2% (respectively).

Also, I intend on only using this room for my short film, what other things do I need to hide in the other rooms to increase the performance? I’m saying perhaps the sphere reflectors? and the spotlights at the windows?

Thanks again for your assistance!

Thank you for your reply! I’m afraid post-processing to tune down the light is not a viable option, there are burnt colours due to the overexposure, the whites are too flat. But at least I know now how to better address the initial spots, but what can I specifically do to tune down the exposure in the first place? thank you! 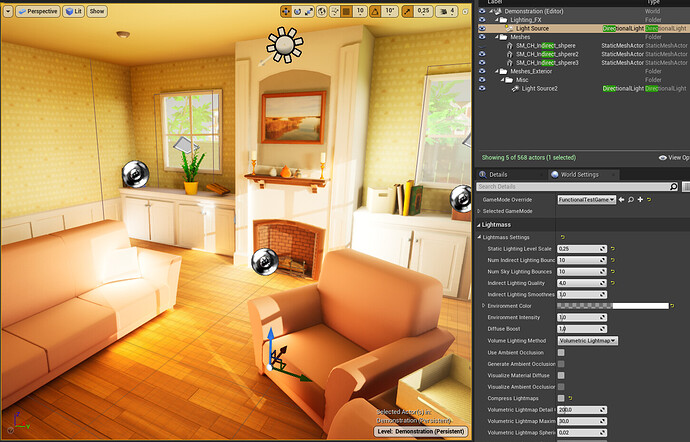 I think I can call it now a success! thank you so much for your input! I used the parameters as per the screenshot, I also went to all the lights one by one and lowered the indirect lighting intensity, I also revised the parameters of the PostProcessVolume as per your suggestion!

Next step is to figure how to lower the direct sunlight that seems too intense, but I’m happy I’m getting a better grasp of the lighting!

PS: this is a Production level render, this is what eventually solved the patches issue, but the real problem was with the extreme amount of lighting, and now both problems are solved

I’m glad it worked out!!
I wouldn’t touch though the indirect lighting intensity BUT the intensity (main setting of the light)!! …it can cause problems in cases…
If the sunlight is too strong (or any of the lights) just do the same: lower it’s intensity /not the indirect lighting intensity!!/
I guess this scene originally was designed for an earlier engine version and since then a couple of things have changed /like exposure!!/ and I think this is why you have to re-tune the lighting!
The best imo is to get a kind of dull render with duller lighting and shadows and then you can change it through post processing to your liking! /higher contrast, stronger, weaker lights, color correction, saturation…/

ok well noted, thanks so much for the input!