is it possible to get something alike with UE4 with a comparable to MGS5 performance?

and quality?
any tutorial or specific info?
(do I need a Hideo Kojima instance? :))

Kojima had a GDC talk about Fox Engine’s PBR years ago.
It’s something you simply can’t do without a big team dedicated to asset creation, layer by layer.

Im gonna link the talk to you https://www.youtube.com/watch?v=FQMbxzTUuSg

MG5 has 80 million dollars budget. I don’t think there are tutorials anywhere how to make AAA game without huge amount of skills, time and money.

ok, thanks, still I would like to someone to point to an UE4’s example of something similar at least (isnt there out AAA games based on UE4 that looks as good as MGS5 ? :))

I think you can get even btter quality with UE4, at least for small worlds or scenes.
The only problem i see is that we have no real solution for real time GI, baking out lightmaps for a open wold is impossible, LPV won’t look that good like Fox Engines GI solution and it’s not production ready.
In my opinion UE4 is not really open world or large world reday…

They actually have most things you need in place, but the rendering (visuals as well as performance) is behind all that and it doesn’t help that Epic tries to fit the engine onto mobile as well.

MGSV is pretty much all precomputed, has only a sky access probe and some sort of ground access probe, and one “bounce” color that’s incorrect and diffuse only that rotates depending on time of day. Is the “Kite Demo” incomplete? Certainly. Do a lot of people want a better realtime GI solution/better open world lighting? All the time, maybe after the next performance update it’ll be addressed.

Of course keeping up these kinds of threads probably helps. UE4 really is trying to do too much at once (Paper 2d! Mobile 3d! Precomputed high end! Realtime High end! All on one thing!) but what can you do?

One engine >> fits all… Never works;
Unity founders are trying this path for almost 15 years already. Other engines already gave up on that long ago…
Eventually Epic’s staff will be forced to prioritize one path or another as well.

There’s too much obsession over realtime GI being 100% on the fly and 100% accurate. We’re not there yet, but there’s options between lightmass and VXGI that’s workable on consoles and mid range PCs at a decent framerate that I’d love to see be available.

Kojima had a GDC talk about Fox Engine’s PBR years ago.
It’s something you simply can’t do without a big team dedicated to asset creation, layer by layer.

There’s a different between the asset and the engine. The assets were 3d scans of real objects, and everything was reviewed in a neutral room. 3d scanning is getting cheaper and cheaper, but that doesn’t stop you making PBR ready assets by hand, which is already required for UE4. I remember them having any unique layers that aren’t in UE4. 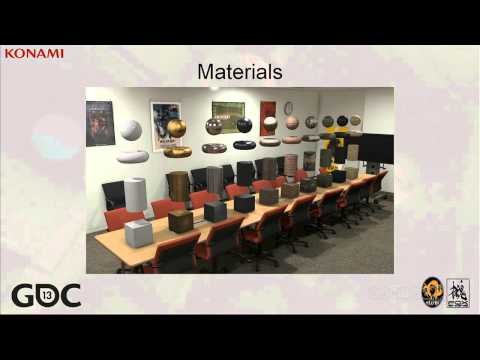