Is it possible to move particles along a spline?

sadly, depending on the length you either run into the problem of vector fields becoming extremely costly, or if you only have access to 3dsmax you will hit a memory wall (32bit script) and cant make them as long as you want.

not to mention if you want multiple different paths.

Already thought about this but I never worked with vector fields before.
What I would like to do looks pretty much like this: 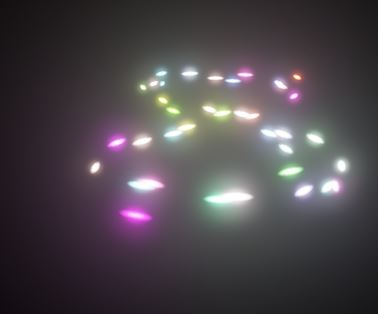 In fact I would like to move these particles through a pipe so it is necessary that all particles move straight along the spline.
Is it possible to do this with vector fields? If yes, which program to create vector fields do you recommend?

the easiest to create vecfields are probably maya/houdini, there is a plugin for blender, and for 3dsmax, only used the latter myself, and in theory you can get a result like the image but it would mean quite some trial and error till you get it right.

as for the actual setup used in that screenshot, direct location module and particles set to velocity might do the trick… but it will be tedious.

Yes, it´s possible ! I have downloaded a free basic blueprint spline (forgive-me, i do not remember the name of the gently men ) that i made a few changes just because the original has made to work only on static mesh. In these changes, i simply added a Particle System reference in the “update point” section on BP. I´m put the link to the project below.

Note1: I´m have some trouble to make location of particle system centered of in the same point of static mesh, so, i´m open to suggestions. But - If you want, use only the particle system and disable “CART” on “update point” section.

Note2: This BP is in early progress, forgive-me about some gap…

Please, let me know if works for you!

next time maybe read a little better man.
thats moving the ENTIRE emitter along a spline, which obviously is possible and easy.

what OP wants is each individual particle to be moving along the spline, and keeping the emitter move-less.