Infiltrator is our most requested demo, and it’s now available! You can download the entire project and use the content for free in UE4-based projects.

Infiltrator is a demonstration we built to showcase Unreal Engine 4 rendering and cinematic capabilities on high-end PC GPUs at GDC 2013. In addition to using these expert-level assets in your own scenes, you can also study them to learn about making beautiful cinematics, animations, visual effects and materials. 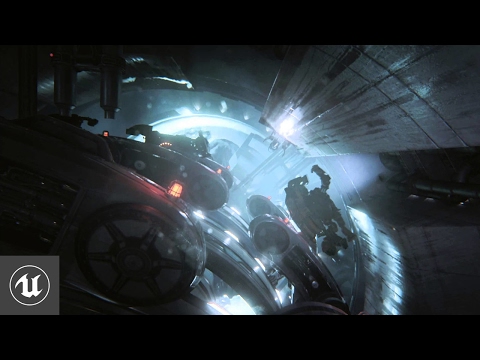 Check out the Infiltrator cinematic above, and head to the Epic Games launcher to access the project in the Learn tab.

One item of note: UE4’s approach to physically-based rendering has evolved since it originally debuted in Infiltrator, so these assets will require some tweaking when they’re used in a new project with reference lighting. For more information, see our rendering documentation.

Can I use the Infiltrator content in other engines?
This content is not permitted for use in non-Unreal Engine games.

In layman’s terms, please…
In other words, using Marketplace Content makes a product a Product. These assets can only be used in Unreal Engine 4 projects, with no exceptions.

What?!! Awesome! Really been an Epic awesome week actually. Thanks Epic people!

That’s awesome! I’m always wanted to know how you did the 3d explosion. Thanks.

This is great! Now that you are in the mood :), any plans to release Zen Garden?

Well, if it is the whole project, then yes.
Great release, thanks for sharing Epic.

Thanks guys this is great, downloading now!

Originally Posted by CriErr https://forums.unrealengine.com/images/buttons/viewpost-right.png
So, this demo include everything what i saw in video?

Awesome, I’ve always wanted one of those projection shields, from the Tyrell Corporation.

Do you know what powers it? I have several AA’s ready

(On a separate note, I just know someone will change the voice from “shut down”, to “Shut it down, Shut it all down”)

After watching the video i have to say this is sick, contains probably very cool stuff.

Thanks for all the hard work prepping this scene for a public release. It’s truly an amazing offer!

I’m so giddy with joy

I think they could release the assets in parts on marketplace. The demo is too heavy for mid range computers