I’m using a clean project with one stationary light source. The landscape object is also stationary.

Do you have any ideas on why this is and how to avoid it? 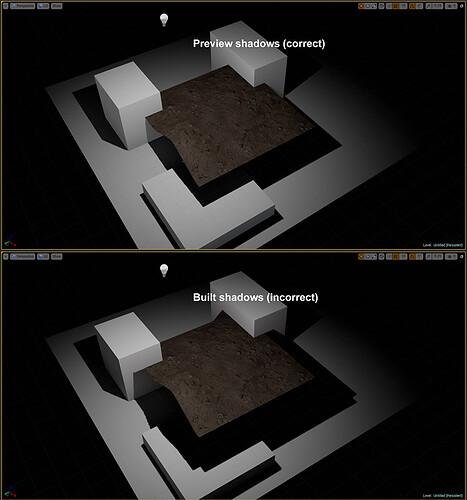 I was able to confirm what you are reporting and have entered a bug for the issue UE-31291. Once the bug has been addressed by the engineers and a fix has been made, it will be added to an upcoming major engine or hotfix release. With that said, I tried to do some digging as to what could be causing this issue,

If you have further questions please let me know.

I’ve tried a couple of different things, but have been unable to come up with a workaround for it. I only came up with different methods of making it worse :).

The reason this occurs is we expand and overlap landscape components and this affects the borders of a landscape for lighting purposes.

So the bug returned as ‘Won’t Fix’ as the engineers determined you are never intended to see the edge of a landscape (it’ll either be embedded in the floor or extend to the horizon), and therefore wouldn’t see its shadow either.