When importing FBX to Unreal, it gives me the option to import the Model using the Material-Import Method: “Create New Instanced Materials” and select my base material i prepared beforehand.
Importer Screenshot:
[SPOILER] 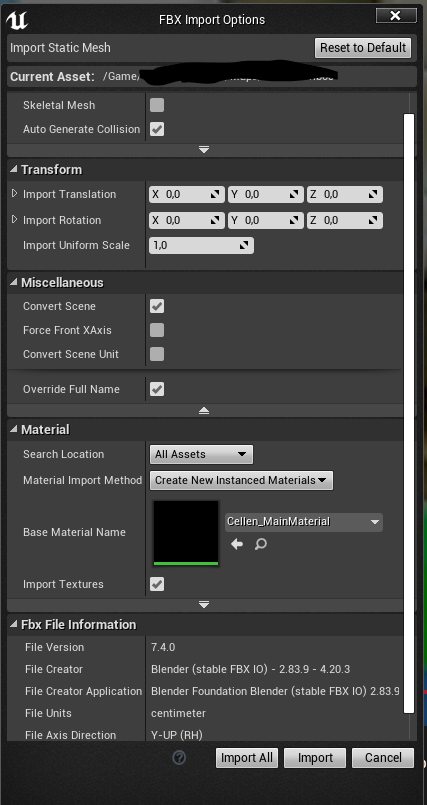 Is there a way to import a FBX File and let the importer create Material Instances using one specific Material as “Master”?

thank you in advance!

Upgrade to 4.25 and see, if it works for you, because i just had run a test import with 2 different fbx, and both created material instances from the main material, i had chosen in that window you showed here.

And while you are on it, make sure, that you go into/expand the “mesh” category and check, that it is set to “imorting normals”, and not generating it (compute normals). had it with Cinema 4D, where new normals were generated/computed, which led to a big mess, as in, no smoothing was applied anywhere, only hard edges all over the objects

Hello @Cellenseres I just had the issue myself. The trick was to update that property :

While being sure that you have a “Param Tex Object” inside your base material so it can reconnect the albedo where you want.

What property are you talking about? Can you be more specific?

I have this problem too. Using unreal 4.26

make sure to over ride everything on import, all params. don’t leave them clear (this makes it not work)

then you will have a mat instance on import instead of mat.

Sorry if I am necroing, but I think it would help others to add something here:

I tested extensively, and some FBX files would create material instances from my parent, and some others would only create simple materials, even though I imported all of them using the exact same process. So I thought that it had to do with the fbx itself, and not with Unreal. Further testing as to what causes it is required, because fbx files come from 1000 different places, one cannot draw definitive conclusions.

Anyway, for the FBX files that didn’t work (meaning, they created materials even though I pressed “create instances”), I imported them in a 3D software and exported them in OBJ format. They worked that way, I don’t know why but they created instances.

i got the same problem ,you helped me a lot.Thank you!