It has come to my attention that one of this months (January) free assets is using stolen parts.
The asset in question is the Orca Games Full Animations Bundle, which is using animations directly copied from Mixamo.

This makes the asset illegal to use, because the Mixamo terms only allow for commercial use in full projects (e.g. games or film), as long as the content is inseparately embedded within your project - but do NOT allow to resell the animations.

Looking at the reviews and comments, multiple people talk about this and the seller even acknowledges the problem by evasively offering a refund.

I have reported this to the Epic Support and after it was escalated to a senior marketplace admin, I only got a seemingly automated, evasive reply that asked me to report the asset if I am the copyright holder.
This makes it look like the marketplace team is fine with giving away illegal, stolen assets during the free month, knowing that it can get everyone who uses this asset into legal trouble with Adobe…

Why is there nothing being done about this?
And this isn’t the first time I reported stolen assets on the marketplace, in each case I got the same non-reply and the stolen assets remain for sale till this day. How can this be okay?

This is also relevant to this: 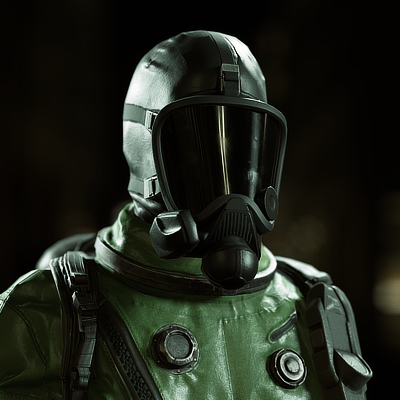 @_vladislavzh
UE developers, be aware: current set of free content of the month on @UnrealEngine Marketplace contains a bundle that has animations lifted from Mixamo and other UE asset developers. Here are few comparisons. I really hope Epic Games will investigate this. https://t.co/EqZtTFhOfQ

and the answer that the person reporting got: 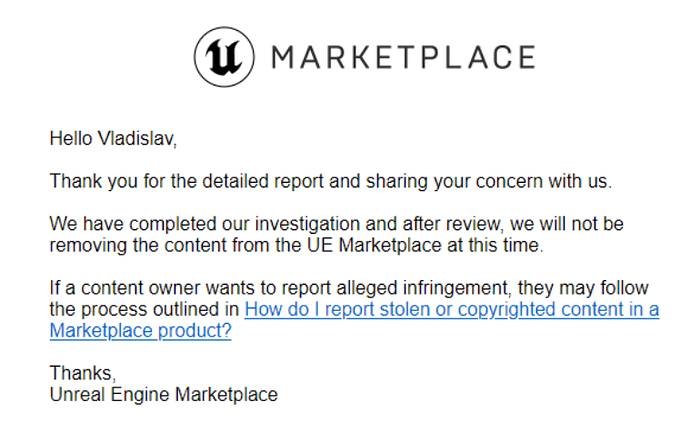 Edit: PS, that’s not the first time as well… About 2 years ago it was the same, but I think with animation ripped from some game… Tribe maybe?

Wow this is worse than I expected, so the marketplace team is actually knowingly commiting a copyright crime AND making ever person who downloaded that free asset complicit…

Interestingly this isn’t the first time I reported stolen assets on the marketplace and I always got the same non-answer that asked me to report it if I am the copyright holder, even though I gave them unrefutable proof the seller did not have the rights to that asset. They remain up on the marketplace to this day…

hi,
thank you for the tip, i have downloaded the asset but the animations are real choppy in some places so i decided to delete it, but after your message i will remove it from my vault. 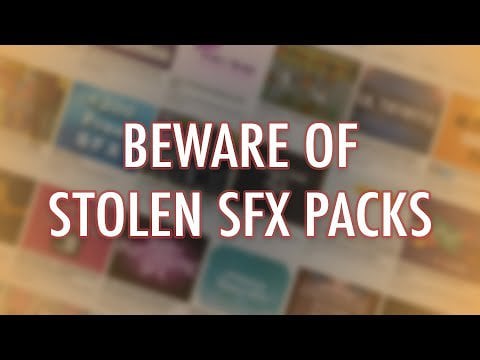 How can you remove stuff from the vault?

hi,
sorry should have written it in other words… i meant deleting it from the specified vault folder

That is a shame. I’m always into free stuff, but knowingly accept copyright infringements is a no no. It should not require an active action by the copyright owner in such obvious cases.

Last year something similar happened, with many different asset packs, but the user is still allowed to sell on the marketplace

Our company was about to start to sell assets on the marketplace… We are reconsidering it now. If our work can be stolen this easy with literally no reaction from Epic, what is the point ?

I think you missed the point.
It doesn’t matter where you sell them, the issue is that if you publish them elsewhere they could be re-uploaded on the marketplace.

I think that Epic would take them down if contacted by the copyright owner, maybe they are not “doing anything” because the publisher could have private agreements with the copyright holder, this issues should be reported to them and they should contact Epic directly.

I think that Epic would take them down if contacted by the copyright owner, maybe they are not “doing anything” because the publisher could have private agreements with the copyright holder

It’s rather that the marketplace team seems to have a mentality of “we don’t care because we are part of a giant megacorporation”.
Which really sucks because this could put every developer who downloaded and uses these animations (or the many other stolen assets on the marketplace) into legal trouble, and the Epic marketplace team knows that very well.

And if Orca Games actually had an agreement with Mixamo / Adobe, they would write that in the asset description or as an answer to comments & reviews that note the stolen animations - instead they are begrudgingly offering a refund.

You should talk to mixamo not epic: “Someone is getting rich selling your free, cheesy, choppy animations.”
So they’ll spend a lot of money on lawyers, but the animation maker shows them a blender/maya/etc file. with an unreal dummy rig. And the animation files.
So things get complicated, keyframing position is not copyrighted,